to a final collection of poetry: Whale Song,
where he chronicles the rivers drawn

from his lungs, the bowels echoing like a whale
speared in purpled waters. Before I tell you any

of his secrets, know I have felt the same
intoxicated shame, licking my dry lips

in disgust. I have let a saint’s eye be my mirror.
Like Brewer, I have fantasized of dying in the throes

of orgasm. A dragon of many things: of bards,
of the American West, but, most of all, his den

of books, where he crawls from shelf to stack,
breathing hot verse on bibliophile and browser alike,

Ken Sanders, stammering and trembling,
reads “The Visit” by Kenneth Brewer to me,

his beard glowing white and wicked as a warlock’s.
I listen, as Death stumbles in his heels, seductive

as a woman’s drunken underarm, letters
like sweat and hair stuck to the page.

I bought the book immediately. Like you, I want
the forgery to be true. I want to imagine Death

as a trans woman, all stubble and stiletto,
shoulders and sashay. I want to know Death

so intimately, I know exactly where to kiss
to make him come. I want to become a part

of you that used to ache to the touch
but is now a seamless part of your skin.

than myself. A nod would be enough
for me to understand, yes,

love has always been here in my flesh,
has never surrendered, never left.

Death sits on the side of my bed,
Skirt hiked to hair line, says
Hi handsome. Dance with me?
No thanks, I say, not yet.
I’m just a man with pancreatic cancer,
not a corpse. Besides, I’m married.

Death stands and straightens his skirt.
I’ll be back, marriage or not.
Then he stumbles on his high-heeled shoes.
Careful, I say, you’ll kill yourself
trying to walk like that. But the room,
empty, squinches up like cheap perfume.

Left alone, I admit, I could become Mr. Bones,
and do that old soft shoe shuffle, tap, shuffle.
My father did that in the end, bones in my arms,
as I carried him to the car for Indianapolis and the
big VA hospital where he saw Death, getting out of a cab,
Nice legs, babe, you wanna dance? And did.

Eleven years later in a hotel room in Mississippi

Somewhere in Biloxi,
between the musk & muscle
of a man’s legs,
there is a bull whose breath
is the bass & bellow
beneath the buck of the sun.
Balls heavy in heat,
their castration is a popular
fiction. Most men
can’t last more than ten,
but what else is new?
I send them flying too.
Breath wet as July,
my tongue. Must grab me
by my horns, my
hips. I ain’t mad.
Love is worth
your dark-eyed danger.
The hands of man
over my mouth.
I’m too good
a woman not to know
the risks inherent
in my best dreams.
After months’
longing, I thought
my laughter enough
to bloom a smile
from his lips.
It is easy to romanticize
death after the frenzy
of orgasm, love,
but when I told him
I was trans, I died.
Am I a fool
if I still choose love?
if I risk it all
once again?

I imagine your dark fingers combing through graying hair. The baths, the fat sponge squeezed over chest & leg of bastard & benevolent alike. The nervous questions. The pills, the concentrated orange juice, the cup of fruit, the trays. The apologies of the incontinent. Grandmothers’ gratitude. The silent weeping. The heart monitors’ aching chirp. When women say they’re in pain, you believe them. When men grow hard & unembarrassed beneath your soap, you ignore them. When they make comments on your figure, you mad dog, exhausted and undeniable in your womanhood. The visits from barely somber children. The aunties’ prayers filling the room. The translating teenagers. The roses & rosaries, horchata and twizzlers and pound cake brought from home. The barn owl eyes. The dog-eared books left on the floor.

Dee, were you not an angel of death? Did you not hold the shoulder of a dying librarian, as she whispered to you about God? Did you not shut the eyes of the ex-con who refused your medication, desperate to die sober? Another may have written poems while dying of pancreatic cancer. There is a queer gurl somewhere who remembers your kindness the nights after the pills. There’s a mother who misses her child.

He stabbed you one-hundred-and-nineteen times. It was hours before your homegirls found you. I ask, who else collected you when you died? I pray to God it was a sister. I want her to lay her thick hands on my chest to wake me from this nightmare. I want her soft brown face to be the first thing I see after the final hammer of Life. Life is a White Man. His poetry is the catcall. The Desert Eagle, his national bird. When that white man lifts his heel from my windpipe and the dead gasp of air whistles out, I want Death to lift me up in her arms, her lips sealing the battered plum of my face. If Death appears at my bedside in the middle of the night, I would not scream. I know it is because then is the safest time to run.

Reader, who do you want to collect you when you die?

Yesterday, I was surprised by my wife
with a vase on the table next to my bed
and full of red, pink and orange zinnias
from our yard. Immediately, the room
came to life, a brightness lodged within me,
zinnias covering each spot of drab cancer.
Tonight, sleepless after my first chemotherapy,
I see the flowers each time I check the clock.
When I finally sleep, I know I will awaken
to zinnias, zinnias, zinnias.

sister, take me to where
i can dishevel my lust
bend my bones
back, fat & twisted
heal the helix of fury           behind my uvula

sometimes i fear the heavens

will my mother be there?
my father?

if to love means to leave

i will go where you take me

¿Is it safe now, hermana? 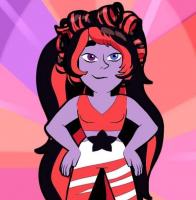 milagro moreno is a genderfluid scorpio raised in the southwest. She has a pet tarantula named Terry. She wants to see Megan, Thee Stallion and Zuli, La Duraca collaborate. In her free time, she practices Daoist Qi Gong and is training to be a b-girl. milagro recommends Black and Pink.