It’s not important what happened before. The past with its burnt-out lightbulbs, its crumble of petals and such.

The way he was waving goodbye that last time and how it all seemed over. But wait it really wasn’t. So, he calls one night, like everyone said he would. Coffee blah, I’m sorry, blah blah, I still love you blah blah blah blah blah.

To be honest there was no before story. Not one that was written down.

The mother and the father go back to the house they raised their children in. Then one the bank took when the father lost his dad job at the downtown company where he went each day with his coffee and paper and winked at the secretaries’ clackity clack. When he waved goodbye to his life, to his dream job. Today, he waits until the family living there goes on vacation. He tells his wife, shhh, stay in the car. He goes over and lights up his newspaper, waits till it flames up and places it under a pile of leaves by the porch.

A woman watches a reunion show she loved as a kid. How half the time is spent on how they look now, how wrong they grew into their new bodies, how unexpected given how cute they were. She looks at a photo of herself, her husband, her baby. She switches the rerun channel and watches an episode of the original show. She looks at her photo and says, “don’t.”

A prequel note just for contrast. Before the girl grows up and marries Mr. Wrong, the one who will beat her senseless and she won’t be able to leave, and will have to teach the kids to go play in their room when Daddy’s car drives up, Before all that, there is the look on her own mother’s face at 10 pm, ruined pot roast in the oven. Father working late again, but everyone knows it’s another woman, and Mother saying what can you do? What can you do?

The buds of April. No surprise, but after such a long winter. Snow choking the streets like every other year, streams of car exhaust, warm it up, warm it up, and then out of nowhere, spring.

The thing of it is, we are still living our childhood. Whatever we do, we learned to do it then. We are simply Superman 2, Godfather 2. Good movies. Maybe better than the first 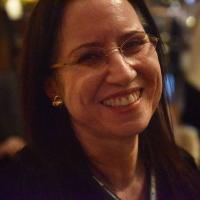 Francine Witte’s poetry and fiction have appeared in Smokelong Quarterly, Wigleaf, Mid-American Review, and Passages North. Her latest books are Dressed All Wrong for This (Blue Light Press,) The Way of the Wind (AdHoc fiction,) and The Theory of Flesh (Kelsay Books.) Her chapbook, The Cake, The Smoke, The Moon (flash fiction) was published by ELJ in Fall 2021. She is flash fiction editor for Flash Boulevard and The South Florida Poetry Journal. She lives in New York City. Photo by Mark Strodl. Francine recommends St. Jude Children’s Research Hospital.