I am… detribalized, disconnected.
Part of me has been stripped away forcibly by
Assimilation, Acculturation, Americanization.

“Kill the Indian, save the man,” they proclaimed.
Sent off on trains to faraway places,
hair shorn (was mother dead?), uniforms issued,
home languages silenced with slaps,
traditions, songs, dances, clothes replaced by
a harsh, grating tongue meant to keep us quiet,
clothes meant to render us still,
religion meant to shame us into oblivion.

Relegated to the history books and even now nearly forgotten,
only remembered at times of convenience—
Thanksgiving, maybe Columbus Day, the occasional mention of Wounded Knee.
History condensed for school children to coloring worksheets of pilgrims and Indians,
quick lesson plans of random tribes in between turkey sketches and artwork—
who would have thought, “Kill the Indian, save the man” would have been so effective?

Despite history against us,
we survive, our stories persist through blood memory,
the blood of our ancestors, their pictures, their stories.

Our blood memory,
mine and my children live on in a woman only known to us by a picture
from my grandparent’s house
and the name…Sabas.

Sabas, my Great-Great-Grandmother,
dark-skin, stoic, far-away look, wide-set eyes
perhaps wondering if she would be remembered and by whom?

Sabas lived in Port Isabel, part of the Karankawa tribe perhaps,
no one knows for sure.
She lived with her family and people
until one day a man with green-blue eyes, like the Gulf of Mexico,
sailed from Spain, his name was Valent.
He, with the alabaster skin and green-blue eyes and
she with her mocha skin and chocolate eyes met, married, and had children.

My younger self accepted this story,
my older self wondered—did she marry for love, was she forced to marry this man?
Was she truly happy about leaving her people, culture, herself?

Sabas stares at me from her picture,
next to her, my Grandfather, her grandson, smiles from his.
Exact same features--wide, round face, mocha skin, dark hair
—all the same…except the eyes, his, green-blue like the Gulf of Mexico.
Those pictures no longer up in a house that recalled her story,
the house is gone, her picture tucked away,
will her story be tucked away too?

I look in the mirror,
searching for her—Sabas.
Is she there, was she ever?
Me with my pale skin, brown eyes, bushy-curly hair.

I only see a detribalized self, looking, searching, asking
questions about our past for our future. 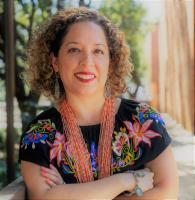 Margaret Cantú-Sánchez is a Visiting Assistant Professor of English at St. Mary’s University where she teaches composition and literature courses with a focus on Latinx theory and literature. Her academic publications explore how to approach the teaching of Latinx literature and theory. Margaret’s poetry has been featured in the Texas Poetry Calendar 2021, Pecan Grove Review, The San Antonio Review, and Dissident Voices. Her writing often focuses on her childhood experiences growing up and spending time with her maternal grandparents in the Rio Grande Valley. Margaret recommends RAICES.