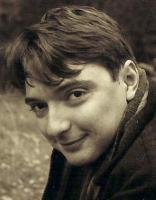 Clay Thistleton has previously appeared at Unlikely Stories as a character in John Bryan's epic Love has been Liquidated. Clay has taught creative writing and literary studies in universities, community colleges and not-for-profit organisations for almost two decades. He is the author of Noisesome Ghosts (Blart Books, 2018): an Elgin Award nominated collection of found poetry that investigates the phenomenon of ghosts and poltergeists that have the ability to speak or write. His current project, Never Mind the Saucers (Stranger Press, forthcoming), examines documented instances of alien-human sexual contact. Along with his son Dylan, Clay lives in New South Wales, Australia with a fluctuating number of feral cats.