"Rebellion Against the Tyranny of Facts," "The Winds of History," "The Light He Beamed on the Death Squad," and "Effigies of Men Walk at Midnight"

Rebellion Against the Tyranny of Facts

The rebels have massed on the capitols of the
World, armed with hostility. True believers,

By inner detachment from truth, obedient to
Visions only they see. Most astounding is our

Civilized society’s deep compulsion to revolt
Against itself. The terminus of mob animus

Will be very dark places, above ground and
Below, as death instinct takes on will to live.

The Winds of History

When the winds of history blow over the
Chi Rho above the choir, their voices must

Be raised to ring forth from the chapel.
Sweet leaven must carry on high to keep

Spirit fast against the wrecking storm. We
Must sing against armies marching during

The night across the plain to slaughter love
In the blossoming valley. We must voice our

Convictions in the places the spirit calls home.
Our gentle light must eclipse armed darkness,

Or else swords and missiles will bleed us all
Into the wind on the darkest night of the soul.

The Light He Beamed on the Death Squad

An interesting thing occurred as the civil
War grew savage and grim. The poet in

His garret wrote on, and on, on the sides
Of kraft paper containers. He waxed both

Heretical and prophetic in a seminal Indian
Summer. The generals disfigured his fingers,

Burned his nerves, in a panicked frenzy to
Halt the blasphemy. But he taped his poems,

Smuggled them out. The spirit burns to give
Voice to the best within, even as evil prevails

Without. Our poet wrote not with ink but with
Dread light. He is dead now, the whereabouts

Of his remains unknown. Yet the bright light he
Beamed on the death squad at his door lives on.

Effigies of Men Walk at Midnight

A moonlit night in my town that was, the
Morbid tranquility of leaden silence reigns.

No dogs bark, no cats yowl, no pigeons
Murmur coos. My town that was lies before

The only sound to crack the crying darkness.
Effigies of men begin to walk the dull, vacant

Streets, slow motion cast in bronze, behind iron
Faces. I recall what we had been and glistening

Steel tears begin to roll. Yet I can do no other. I
Must join the plodding ranks marching to the sea. 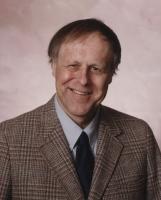 G. Louis Heath, Ph.D., Berkeley, 1969, is Emeritus Professor, Ashford University, Clinton, Iowa. He enjoys reading his poems at open mics. He often hikes along the Mississippi River, stopping to work on a poem he pulls from his back pocket, weather permitting. He has published poems in a wide array of journals. His books include Leaves Of Maple and Long Dark River Casino.