"Random Violence" and "The Dead Who Go to Market"

It leaps three feet straight up to save its skin & crashes into the grill of a semi
It stands silent as the weight of the nine planets presses upon its shoulders
It retains its shape after 1745 washings
It’s refused service in an elevator & consequently has to walk up thirty-five floors
It works intuitively and resolutely & remains calm even after the guards have locked the doors on it forever
It gives a high like Parkinson’s Disease—one short,
and you’ve got the shakes for life
it’s got love out the yin-yang
it makes a sound like a zippered handbag being opened inside a cat
it feels the pleasant weight of its lover & cries out for the touch of her lungs
it fixes its eyes on the future & gets buggered by the past
it spits hand cream
it makes a sound like slugs in tuna salad
like my grandfather swallowing a live frog
like a dime caught in the throat of a priest (St. Blaise pray for us)
like a postman eating a nail
like a blind book in an underground stream trying to grope its way out of the water
like a hand made of jelly crawling out of a boxful of nuns
it cries to see its face in the mirror, even after its throat has been cut
it believes the earth is hollow & blames the Jews for draining it of blood
it spits latex paint out of its nostrils & carves fluorocarbons out of thin air
it listens to Lohengrin & divides its time between ignorance & indifference
it wakes up in the morning screaming that it doesn’t want to go to work
it’s a cloud of spiders falling on an English country town
it’s a pair of fingers curled up in a bag at the top of a tenement stairway
it’s a worm eating a piano
a blind woman waiting for a train
it believes in individual freedom but not in individuals
it’s a dead Marine shipped home in a bag with a substitute head made out of wax
it’s losing its hair & saving face but still hates its parents
it retains moisture even in a temperature of 216 degrees
like a door made of water that leads from a tent to a trail in the jungle along which hikes a
woman with   a needle in her lip
(the door is ajar, flies fan out over the countryside & slip down the throats of the faithful praying
for the intercession of St. Jude)
Its blood runs through the city on buses
It walks down the railroad tracks in the middle of the night
dragging a dead policeman

The Dead Who Go to Market

The dead who go to market go there to sleep.  The killers who go to market go because they have chosen to go there, they are under orders from some primal energy, and the people they kill do not deserve to die.  They die because they were fighting to survive, they only wanted to live, they were shopping.  The killers arrived in time to find the sleepers in the store.  They raised their guns because they had to, they believed they were on a mission from god.  Some people say they were out of their minds, some say they planned everything so rationally, how could they be insane?  They knew what they were doing, they believed in themselves, they thought they were on a mission from god.  They fired their guns and the people fell, they dropped like fallen fruit and splattered on the ground. The killers believed they were doing right, they heard echoes in their heads of Winchesters and Colt 45s—screams when they heard voices, bodies falling into a pit.  When the killers heard the last whimpering cries, they fired some more, until they heard nothing else because they were haunted by the sounds of gunfire at night, pistol shots in the afternoon. The thunder of hooves driving the old people into the pit, the old people, the women and children into a pile in the pit, into the blood memory of the men who did it. They die because the buffalo died until they were allowed to live again, and they died because strange fruit hung from vines. 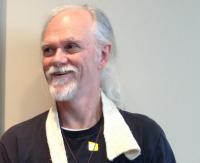 Dennis Formento lives in Slidell, LA, USA, near his native New Orleans. His books of poetry include Spirit Vessels (FootHills Publishing, 2018), Cineplex (Paper Press, 2014,) Looking for An Out Place (FootHills Publishing, 2010.) Dennis edited Mesechabe: The Journal of Surregionalism 1990-2001. He is the St. Tammany Parish organizer of poetry events for 100,000 Poets for Change, a network of poets for peace, sustainability and justice world-wide. His recent publications include translations out of Italian of poems by Florentine poet Cristina Campo (1923-1977), soon out from BlazeVOX, and a few of his own poems translated into Italian in the bioregional publication, Lato Selvatico.