What would you do if there was nothing to fear in the night?

What woman hasn’t toyed with that question?  With a sigh, looking up at the full moon, she sat with it.

When the change came, painful, she did not fight her body for control, and so there was a sort of joy in just riding things out.  It was not unlike a colonoscopy, she thought, which helped her think of the paranormal hijacking as just another adult routine.

She had her first in April; found it unpleasant but survivable forcing your body to expel everything in your system.  The part she couldn’t shake was that she had gone through forty years of never appreciating the weight of it all.  Eight pounds, vanished in the cleansing.  Eight pounds of the stuff you carry around with you, bottled up and building, the mundane waste that accumulates from just living.  Everything you have no use for.  Eight pounds.

When her body finished transforming, she howled.

All the shit that she was supposed to hold in and extrude politely and in private – it flowed out in a primal flood of sound.  Tiny frustrations tamped down, dancing around politics and egos in her office, more of the same in society at large, hurt feelings abscessing like a splinter left instead of fished out quickly, obligations of all sizes trickling in from a bottomless sea that would eventually erode all her boundaries.

The howl pierced the city and people shuddered, even those who did not realize what they were hearing.

She paused for breath, wondering if there was more. She found she was emptied of fear, in all the names we give it.  In the hollowness left, she recognized her hunger.

She left the house without checking a mirror, confident in the grace of the invincible machine that was her body.

She walked the deep night streets, a view of the city she never risked unless unavoidable, and even then she would never take the time to stop and stare at the lights of 6 million people like they were stars.  If she tried that in her ordinary body she’d look like a tender morsel of tourist.

Jesus, she thought, her mind riding shotgun as her body strode through the shadows. What does it take to break centuries of careful domestication?  A fairy godmother gives you wishes, you ask for a dress.  A fish prince gives you wishes, you ask for a sausage.  When someone offers us infinity we can’t imagine what we’d do with it.  All we would ask – a walk in the dark.

She ambled.  She inhaled the perfume that a city leaks from its pores, stewed a full day and now cooling: thicker, cloying, complex.  Finally, her nose found the tingling thread it sought: a waft of anger.

She followed the scent, sharp and bitter, chokingly strong.  It drove her forward and insane, like a shark tasting blood, her teeth tingling as if she bit down on electric pennies.

Everyone has a personal strategy for hunting, most driven by some theory on predating predators.  One of her pack went for the suicidal, figuring, as a good Catholic, she’d save them from a sin.

In this body, she did not need to distinguish between what she deserved and what she craved.  She stalked anger, she wanted anger, each month frantically swallowing as much as she could in hot salty gobbets, never ever enough to fill her hollows, her hunger never sated.  She gorged herself on men who were made of what she could not manifest in herself, and when she awoke the next morning, naked and bloody, she wept at the rage she did not have in her belly. 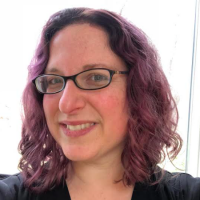 Shana Ross is a writer, mother, occasional muse, sometime wallflower, a middle aged ambivert with a BA and MBA from Yale University. Since resuming her writing career in 2018, she has appeared in over a dozen different publications, including Anapest Journal, Chautauqua Journal, Ghost City Review, Mad Scientist Journal, The Sunlight Press, and Writers Resist. She is an editor for Luna Station Quarterly and facilitates a laboratory in Interpersonal Dynamics.