Portrait of an Amateur Roadkill Artist

After the divorce, there was the standard
every-other-weekend visitations.
My father would come to pick me up
and we’d spend the day driving around
back country roads in his old Datsun
with no air conditioning, windows down.
He had a new-to-him camera, and was searching,
searching, as he’d searched his whole life.
He’d come from a family of artists,
and was cursed with the temperament.
He tried law school and business school,
tried the Air Force, tried to be a writer,
tried to work for his father’s friends,
tried to own his own business, tried
to be a rancher, a farmer, a mortician,
a house husband. Nothing stuck.
On those sunny blue days, we stopped
for broken-down old barns or brick silos
grown over with ivy or just empty pastures
that caught his eye. I was seven, and unspeakably
bored, leaning against split-rail fences.
What’s so special, I asked, about some old barn?
I’m not sure he ever answered. We went
to the movies. He’d buy us a ticket,
but we never watched just one. Double feature,
he always said. He cried all through Philadelphia.
I remember his old three-story walk-up,
the warped floorboards that felt like
they could give out from under my feet
at any time. Then our day trips were spent
searching for roadkill. I looked away
anytime he found a patch of blood
and ruined fur baked into the asphalt.
Why? I asked as his camera whirred
and clicked. Look at their expressions,
he laughed. Just look at them.
He struck out west. There was another wife,
another child, another girlfriend, California,
where he lived in his car for two years.
I saw him less and less. Five other states,
New York, last I heard. Did you ever
find what it was you were looking for?
Look at my expression. I get it now.
The dead don’t look back.

I can’t tell you my story without telling you all the stories that came before. In the house my family built on a hill, matriarchs were born and died. Sometimes, I think it’s the ashes and afterbirth soaked into the clay. Sometimes, I think it’s the wailing and grief staining the ceiling instead of nicotine. Sometimes, I think things broke so easily because we vibrated at too high a frequency. If the burners on the stove were on, they were on high. If we spoke, it was on holler. When seven generations cram into a single house, it’s the only way to be heard. We had no hobbies, only addictions. Pain and rage blurred. Sometimes, I think it was the house itself, on a dead-end street, its relation to the multiverse. A river of gravel, a bed of fire lilies, a porch swing, a back alley full of strays, instruments that no one played, ants in the sugar bowl. Wild lots whose tall grass lured you in with promises of everywhere.

Sometimes, I think there are talismans. If you can hit on the right configuration, you can open doors to other places. If you’re patient, you can pick the lock. I’m still trying out different combinations: a pocket watch and a pitcher of Wyler’s Electric Grape? Vicks VapoRub and an old cable box? A lipstick holder and a rotary phone? A chenille bedspread and a handful of dominos? False teeth and refrigerator magnets? Curlers and carnival glass?

Sometimes, I think the old ancestral manse was situated on an interdimensional border. People saw shadows lurking in the yard. The dead walked. Spirits knocked in the walls and lights flickered on and off. Angels and aliens jockeyed for influence. We have room for both. In my mother’s house are many mansions, and anyway, it’s all lights in the sky. Once, as I lay on my grandmother’s bed, in the grip of a disease that would soon overrun my insides, a portal opened, and men from another world stepped out to tell me my destiny. It might have been a hallucination, but I don’t think so. No more than Jacob dreaming of ladders. I awoke in a pool of blood. We never got it out of the chenille.

When my grandmother died, I inherited a key. I carry it with me. The only daughter of an only daughter of an only daughter of an only daughter, matryoshka manifestations of the multiverse. Cosmos within cosmos, born to open doors and tunnel inward, to turn ourselves inside out. My dreams are filled with hallways, stairs, rooms, cellars. I dream of the gone. Heaven shrinks down to an infant-sized infinity. I was the last infant, so I am burdened with infinity. We’ve lost all the talismans on the road somewhere, including my womb. We’ve lost the house. It sank, fault lines in the foundation. Fists and projectiles and cracks in the walls. We vibrated too high. Mea culpa, but also, look what you made me do. The old knob-and-tube wiring really should have been updated sometime around V-J Day, and I never got a chance to add my blood to the soil.

It's impossible to be a Mexican kid in the US and not think about borders, to not think about the worlds we leave behind. Seven generations from carving out our piece of Americana to the auction block. A kingdom of dark matter, undocumented matter. The dark matter of my insides. Endometrial tissue eludes ultrasounds and MRIs. It vibes at a different frequency. We wrap the black-and-white TV antennae in tinfoil, trying to pick up Univision. The tissue expands faster than they thought, like the universe. It has weight that cannot be accounted for. It migrates. The rogue tissue may have even reached my brain, attached to my cerebellum. Why else would I be able to move like this, across strange distances?

Sometimes, I think, each one of us is our own interdimensional border town, a foot in both worlds and still yearning for someplace else. In the right border town, you’re exempt from passports and tolls. We know how to dodge the trolls under the bridge, how to stow away on UFOs and the backs of celestial bodies. Downdrafts from other universes flutter my hair, beckoning. I wear the universe like skin I’m dying to crawl out of.

I was born less than eight miles from the axis universum, to a poltergeist house. There, too, we heard voices and footsteps. There, too, things were hurled and broken. There, too, things collapsed all around us. Which leads me to believe that it’s not the houses that are haunted, but us. And we are the talismans. I have this key in need of a door. I bang on the walls, a lone tuning fork in search of an answering tone. I cut myself open. If I can only arrange my organs in the right configuration. If I could only calibrate constellations into new galaxies inside me. Until then, I’m an empty porch swing, an unplayed guitar. I’ll dig under the fence if I have to. I’ll swim the river. Strangle on this choke chain. Vibrate till I shatter.

I sharp-dull. I upward fall.
I crash-land. I unman.
I freezer burn. I indifferent yearn.
I hurry-plod. I even-odds.
I visible dark and
bull’s eye best
when I miss the mark.
I soft beat. I forever fleet.
Ain’t my dirty neat?
Aren’t these sorrows sweet? 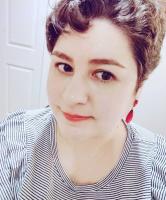 Lauren Scharhag (she/her) is a queer poet and author of Latinx descent. She is an associate editor for GLEAM: Journal of the Cadralor and the author of seventeen books, including Requiem for a Robot Dog (Cajun Mutt Press) and Languages, First and Last (Cyberwit Press). She has had over 200 publications in literary venues around the world. Recent honors include the Stephen A. DiBiase Poetry Contest Award (finalist) and the Seamus Burns Creative Writing Prize. She has also been nominated for multiple Best of the Net, Pushcart Prize, and Rhysling Awards. She lives in Kansas City, MO. To learn more about her work, visit www.laurenscharhag.blogspot.com.