Doug watched television and then went for a run. While he was running, it started to rain. Several cars passed him. He ran faster than usual. This was a satisfying experience.

After an hour of watching the madness that passes for cable news these days, Doug said, "Screw this!" grabbed his sneakers, and set out for a four-mile, out-and-back run. Just after he turned around at the midway point, the cloudy sky darkened and rain poured onto his bare head. For two miles, he splashed along streets and winding roads, still fuming about the current political situation covered on cable news. One car blew by him, missing him by barely six inches and spraying him with even more water from the rapidly forming puddles. But another driver actually pulled over and offered him a ride. Not wanting to get the kindly person's car wet, Doug declined. The offer touched him more than he would have thought, and he felt better a little by the time he got home. To his surprise, the clock showed that he had covered the four miles more than a minute faster than his usual time.

Holy shit, Doug was pissed off by the news coverage of the latest Trump bone-headed tweet. Those morons on Fox acted like Trump was Jesus, but even blonder and more blue-eyed than Fox's viewers thought the actual Jesus was. Jesus, people, Doug thought, the guy was Middle-Easter, for Christ's sake! CNN at least had three sensible commentators saying that Trump was breaking basic norms of civility and embarrassing the country. "Just say 'asshole' because we all know it fits," Doug said to the television. But then they let some ridiculous former Trump campaign hack hijack the conversation by trying to blame Hillary Clinton for something Trump had done dozens of times on national television.

From the start, Trump's time in the political spotlight had been a constant, medium-grade froth of irritation, depression, and incredulity for all sensible people. But on days like this, Doug's anger geysered up and spurted out the top of his pounding head.

"Fuck these morons!" Doug shouted as he tried to kick the TV off its stand but held back just enough that it only wobbled before he grabbed it.

He decided that he had to get outside and run right this minute or he might grab a baseball bat and start breaking things--windows, for example, and moderately expensive televisions. He quickly threw on jogging shoes, socks, a light shirt, and shorts, forgetting for a moment that the fall had turned suddenly cool in recent days. He was so mad that he hardly noticed the chill air. Fueled by his anger, Doug reached the two-mile halfway point of his usual four-mile route through the surrounding suburban roads and streets with his thighs burning and his lungs about to collapse.

As the turned back toward home, his middle-age caught up to him. At fifty, he might know politics better than he did at twenty, but he couldn't run like a youngster any more. He considered walking the rest of the way home, but just then the sky seemed to open up as gobs of fat raindrops hit his balding head like oversized pills flung from the sky by an angry demon. As the rain formed instant streams and ponds along the roadside, Doug pushed on, running even harder.

Just as Doug thought he might make it home wet but more-or-less intact, an enormous gas-guzzling, smoke-belching truck sporting a front bumper plastered with Trump stickers (Who puts stickers on their front bumper?) came toward him. Without warning, the truck sped up and drove intentionally a few feet to the right, into the deepest puddles, and the massive tires sent waves crashing over him, pounding him like surf, forcing water into his mouth, eyes, ears, and nose. The truck passed close enough that he could swear it actually brushed against him as he lurched out of its path, and he nearly toppled over the guard rail into a stream flowing up to its banks just beneath the road--not that landing in a stream would have gotten him any wetter than he already was. For a split second, Doug made watery eye-contact with the driver, who astonishingly, was laughing. Those asshole Trump supporters just love to make other people suffer, Doug fumed.

Once Doug regained his balance, he considered turning to chase the truck, hoping to run it down and break its windshield with a branch that the sudden near-hurricane-force winds had brought down along the road. But he had to get his soaked self home before the next Trumper tried to run him down with more success than the first.

To Doug's surprise, a car in the far lane slowed, and mirrored his speed for a few dozen yards. Doug cautiously wiped half a gallon of water from his forehead and glanced suspiciously at the car, which turned out to be a Prius at least a decade old. The driver rolled down his window, smiled, and called out, "Hey, wanna ride?"

Doug called back, not quite honestly, "That's okay. I'm almost home." He could swear his voice gurgled through the rain. Doug actually still had a mile to go, but he knew that he'd soak this guy's back seat to the point where it would take weeks to properly dry. He couldn't do that to him after such a kind offer.

"Okay," the man called through the rain. "You're doing great--keep it up, buddy!"

The car puttered soundlessly away, and Doug looked for a bumper sticker. He expected "Stronger Together" or "Feel the Bern" or "Coexist"--which the goddamned Democrats needed to learn how to do. But the back bumper was bare as the rainwater flicked up from the tires. Not even, "Eat More Kale."

What makes one middle-aged white guy buy a Prius, offer a ride to near-drowning strangers, and spread love so easily, Doug pondered, while another middle-aged white guy buys a cars that helps ruin the earth, tries to scare or even hurt other people, and votes for a con artist like Trump? He would have a harder time unraveling that mystery than he would grasping a handful of sunshine in this monsoon squall.

His labored breathing resembled sobs as he reflected on the contrast between one fellow human's kindness and another's malice. Water streaked down Doug's cheeks in mini-rivers, and he couldn't even tell if the flow was freshwater rain or his own saltwater tears.

The furnace pumping action of running had ceased generating internal warmth, and Doug's teeth began to chatter as he actually considered dropping to his knees and letting the storm wash him away, perhaps all the way to some far away land where the natives had never even heard of Trump, let alone had to live under his malicious reign and see his spray-tanned mug of TV every other minute. But Doug stayed upright, sloshed on through the flood, and pushed himself all the way home.

Instead of sitting on the porch to catch his breath and gently stretch his hamstrings as he usually did after a run, Doug stripped off as much clothing as he legally could while still in semi-public view on his porch. Then he rushed through the front door and down a short hallway to his downstairs bathroom/laundry. He stepped quickly into the shower-tub combo and stripped off the rest of his soaked clothing, tossing everything into the washer while trying to keep the floor as dry as he could.

As he struggled to catch his breath and regain feeling in his fingers and toes, he glanced at his watch. For a moment, he thought the rain must have damaged either the mechanism or his ability to read it, but the digital seconds blinked as clearly as they always did. To his complete shock, he had just covered this four-mile course faster than he thought possible for his aging body, knocking more than two minutes off his person-best time.

"I'll be d-d-d-damned," he muttered as he turned the shower handle toward hot and lifted his face to the steaming spray, so much different from the rain outside, so much better, so healing.

In that warmer mini-deluge--out of the cloudburst, away from the television news, distant at last from his own racing thoughts for a brief moment--he began, at last, to thaw.

Things suck since Trump won. It's okay to be angry. But things will only get better if we do something. Exercising is a good start, but voting is better. Get to the polls and do the right thing--even if you have to run there in the rain on election day. 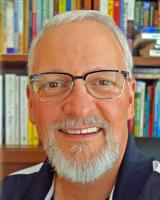 John Sheirer lives in Northampton, Massachusetts, with his wonderful wife Betsy and happy dog Libby. He has taught writing and communications for 26 years at Asnuntuck Community College in Enfield, Connecticut, where he also serves as editor and faculty advisor for Freshwater Literary Journal (submissions welcome). He writes a monthly column on current events for his hometown newspaper, the Daily Hampshire Gazette, and his books include memoir, fiction, poetry, essays, political satire, and photography. Find him at JohnSheirer.com.