1.
we rely too much on the luck of others:
he talks to himself  - a dry-brained mouthy word machine
rubs the silver residue from the numbers    to see if he has won
$50 that’s not even enough for a happy birthday
that’s it  -  a happy birthday    805F     3 whatever it is  - it’s a constant  mumble
# 1 most 3 again  too low 8 for me to here 1st avenue
5 (inarticulate) i could still take the 3rd avenue bus
it’s a living right / very old foreign accents
he’s so busy seeking his fortune that he totally misses his stop
long line – you can get off here    you take a number 1 to a number 6 or an
A or E or C or F at west 4th – these aren’t numbers but they work
fortunes made & lost – particles smashed together & separated
circling each other like dueling swordsmen or lovers or flocks of lost birds

now he only talks to birds & counts the spoons
breaks twigs in his mind & waits for his number to hit.

2.
he dreams of a new physics  - his memory muscle remembering little
he awakens  under pressure  - dismisses the event as a disaster
a new EDEN that can never be  - just more media hype
the long line – an eruption of interruptions – an endless ellipsis
a song eclipsed – reading the melody upside down / backward
& we are left with a short line that sounds too much like the original
say # 6 – the last in the order even tho there are 7 parts
the original had only 3 – but he keeps scratching
for how long  will this go on –  scratching        mumbling short sentences
long lines – all waiting for the media to watch as the wonders begin
an omniverse – a multiverse within supersymmetry –
an elucidated secretly overweight universe –
overweight women discussing their dating habits over hamburgers
the long line enters again – wish / risk / a backlist of sales reps
fabiola nobodies adept at tomfoolery / expanding warehouse precedentals
new equipment & backward promotions & lovers of the death machine
at a loss for words:             the thing is the things which >
art & science colliding    the science of art the art of science
do the math     it’s all there scratch head 7 / 5 13/ 22 / uh
long only as the wind dreams / are least important to our survival /  THE UNIVERSE reverse rhythms / the long line / eclipsis / are the things that make us human / a place to inhabit / visit / able as we are NOT / 400 years of symmetry
400 years of slavery / the Blakean theory of the universe / multiverse /
FEARFUL  SUPERSYMMETRY
beams    auto-clavé    proposal ATLAS  high COLLSIONS  energy
DREAM: poetry & the possibility of sensual sex
dream of physics  / taking physics / rumble of the bus tires
idling of the engine / vibration of the shocks / motionless stoplight / bumpy ride
circling & circling & circling / finally colliding / pudding just for you /
high priest of the good ear / ta(i)nn(t)ed / complimentary speak lady / mute-on   electron/ neutron / to hold her beholden / he scratches & scratches  rubbing off the numbers / then the collision / not 115 for supersymmetry / not 140 for  a multiverse but somewhere in between a 126.5 or 125.6 / so there might be a continuation of something somewhere / or a falling apart     & i say the fix is in  a few more years of experimentation that tell us where the beginning ends  & the ending begins  & the GOD PARTICLE still somewhat elusive / adida amira right there  a warm february night / it’s right there / the assimilation of different styles  / the absorption of different solar systems / the realization that he’s won very little / his head suddenly slumping into his knees / nothing / 1 / 3 / birthdays / 8 / 1st avenue / 3rd avenue / 6th avenue / missed chances  missed stops / the wrong bus / lexington avenue / the hickscups / the goddamned GOD particle / that keeps our lives together / that tears our lives apart / a disabled wheelchair / a brief pause / this ersatz motionless priority of property / you must give up  i tell him / he looks /        scratches    ///   \\\\  whatever  -  he replies – it’s the red hand of GOSH – i almost scream – whatever -  it’s right there – i point nowhere – whatever  - he looks / scratches / GIVE UP – I loudly whimper – he gets up – whatever  he mumbly whimpers – IT’s RIGHT THERE – he bumbles he scratches - so far so good  he ciphers all that grey matter grey stuff grey particles  grey dust grey ghosts  all those numbers collisions  where they all go ?   wrong stop – you’ll have to walk a bit
have a good one  i say – i’m getting off here –
the cross fire of an avalanche
a cavalcade of transitional #’s

there is no need for debt or debate when one does not mean anything to anybody the important point is not to break the chain  to be polite – to say yes & thank you to be accommodating  to supplement even supplant desires – to persist –
consomenations
irritated whites drinking Negrons
ah butterfly the nemesis is you  - short life spans colliding
perhaps all life changing as you change
encounter & encompass grief – hear the flutter of 100,000
the sonic tracks of a silent film
the debt converted to smoke
windows clouded over
city spitting clouds
that wedge
between the arches
of her
high heeled shoes

shuttered windows – der wekstahlvez
paper blowing across an empty street
debt or depth or death
which is it – all fool’s gold
no matter what the substance
all duped no matter what the price.
​werder da cat’s on its quiet pursuit
the unrest of pigeons
as the prison gates open  & you are released like a steam engine
into the street – released from your oustem –
& we walk like comrades & i pour the morning’s waste out of a bucket
as the crowd increases from single file to tenfold
rows up & down pathways / cobbles cabals cables
stairways & staring soldiers marching
the organ grinder playing
the draw bridge near collapse

ah mariposa
the factory awaits its occupants – what is the debt they owe
we owe?

gold dust air greed  - so fly away Mariposa     fly away

"particle fever" was first published in Before Passing (Great Weather for MEDIA, 2015) and nominated for a Pushcart. Both of these poems were recorded as spoken word pieces by Steve Dalachinsky and The Snobs, on the album ec(H)o - system. 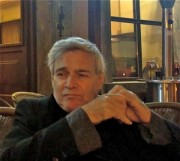 Steve Dalachinsky has been writing poetry for many years and has worked with such musicians as William Parker, Susie Ibarra, Matthew Shipp, Roy Campbell, Daniel Carter, Sabir Mateen, Mat Maneri, Federico Ughi, Rob Brown, Tim Barnes and Jim O’Rourke. Recent books include The Final Nite & Other Poems: Complete Notes From A Charles Gayle Notebook 1987-2006 (Ugly Duckling Presse, 2006), and the second edition of A Superintendent’s Eyes (Unbearable Books/Autonomedia, 2013). His spoken word albums include Incomplete Directions, I thought it was the end of the world then the end of the world happened again with Federico Ughi, and Phenomena of Interference with Matthew Shipp. The second edition of Trust Fund Babies is forthcoming from Unlikely Books.