by A. E. Weisgerber

The Peterbilt tractor heaves, chuk-chuk-grooves to life, its stack lid slaps up and down, twenty-hands high, its horses stamp to heave the cortege, strain to stay ahead of the parade float overflowing with the soft-darting glances of long-lashed babes. Some sit; metal supports steady others, buckets of candy afoot.

War Orphans lean into photographer's assistants, against mothers cloaked in carpets, robes, veils. No time for painting eyelids. Suns out, guns out. Pass around Mickey Mouse sunglasses, Sonic sunglasses. Those polka-dotted spoilt and spotted children, bring them quickly. Their sell-by date is gone. We need them before us: now.

Charon asks: “Where are the basket-bearers? Where are your mothers? Why do bucks take the roles of women? Why are babes let drown in the swan-road, the chop? let to asphyxiate indoors? O! Those lashes wound me!”

To hide wheels, axles, and brake-lights, crews have jig-sawed running waves, affixed them and painted them Mediterranean blues. Scalloped edges, bedazzled, coruscate in afternoon light. The innocent batons are cast high to heaven again and again, accompanying that noise: chuk-chuk-slap.

The holy ones say: “We glorify their daddies and bereft mamas. We like War Orphans propped up in scoops of masculine biceps and passed up to ride horses. We embroider their belts, bandoleers of matchsticks. We have come a long way and prefer them all dead." Air horns deploy chip chiip chiiiiip.

Who is the treasure of the home? The Mayor subtexts: *Bring the babes to me. Let me cradle them in arm. Quick: papoose me. Hawk all the eyes to me. Bring one eye to me. Stick it in the War Orphan’s face. Let the eye chip with a clicking noise. Chip at sweet papooses, ensconced in shabby copies of god’s image like tight coins in my tight pockets. Come…ram steel rods up peaceful clothing, through angelic belt-loops. Room awaits atop the float, at the climax of the steps, the cynosure of every mother’s eye. How I love War Orphans, their small greaves.

One by one the citizens step up to the peephole, fill the lonely review stand, believe it is theatre. Unwilling to refute a mayor, they hand over their eyes and bring their cameras. Each camera floods one tiny face with a million gazes. The face is choked with gawkers.

War Orphans float above a wheeled apparatus, waves jig-sawed out of fiberboard, of plywood, like chicken fingers. Chuk-chuk-chuk the dead one’s stick-like legs, their click-clack hair ties and criss-cross neckerchiefs, their soft napes. Their shades slide down, and with soft darts assail the chorus. Slap by slap they say: I see you, see you, see you, slap. The painted veil logs off in shame (said no one ever.)

These war orphans are spoiled. Don’t drink that milk. That milk is spoiled. See the pink Rorschach blooming upon the white-bandaged temples of children, and remember what is seen is chosen. The chorus countermands. The chorus despises.

There are drapes of tinsel, the color of peppers and onions. Do they make War Orphans a hot or teary sight? Their flotilla, so small now, so full of eyes, is the climax of the parade, the seat of honor. There are carefully placed letters around the float like a piped icing. Chyron says: For the War Orphans! Show us you have not suffered, little ones. 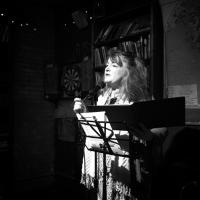