Odessa, Dacha Kovalevskogo, the fourteenth tree on the left

Once, while in middle school, I had to go plant trees in the would-be park around the WWII memorial. Stupid community chore, idiotic endeavor of our homeroom teacher. I was picking the ground with the heavy shovel, leaving useless, shallow scratches in the soil, trying to form some sort of a pit where I could lower the silly twig with its white, wormy roots. It was my first time planting anything. The Coastal Battery 411, a newly founded memorial at the historical military forpost, needed our inept help.

Odessa, Dacha Kovalevskogo, the fourteenth tree on the left if one counts from the entrance.

Later that night, I was haunted by images of mortars and shell cartridges, but remember distinctly that even before the tree-planting school trip I used to think, “what if I wake up in the middle of the night to find myself in the fascist encampment?” Barracks of fear (my fear, obviously), heavy artillery of adrenaline. What am I to do? I'm beyond defenseless; I've no weapons and even if I had, I wouldn’t know how to aim. I was such a clumsy kid.

I am such a clumsy adult. I don’t know how to aim at people who speak Russian. The only thing that I still have today is words. I can ask, beg, demand:
Not to aim.
Not to launch.
To put down their weapons.
To risk their lives and save the world.
To risk their positions and avoid eternal shame.
To risk everything not to become the new Ruscists, the proverbial Nazi, the nationalistic monsters of the century.

The Coastal Battery 411 got on the news today, - has been leveled by the Russian attack. The symbol of Soviet patriotism, the symbol of selfless defense is flattened by newer brutality. I wonder if my twig of the yesteryear survived to become a tree - if it ever managed to grow up - just to be destroyed last night. The wordless tree of trust. 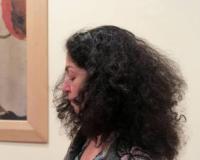