“My Uncle Roscoe is an Artist,” “Borg Adjacent,” “Ladonna Waits on the Suburban Women’s Book Club,” and “Scrawl”

by Nordette A. Adams

My Uncle Roscoe Is an Artist

Music. Drum.    Spirits behind terracotta tiles
push a woman and man forward
in the picture.
She’s on keys. He strums a mandolin. This pair,
glossy in red and brown, in black glazes, have played even
under fire, were laid as we were, under sun,
under centuries of fire, working song
like adinkra-coded iron on French Quarter doors.

Bright glazes. Fired and fired again.
The composition speaks, “We’ve leaped cotton
to chainless days with music since the slavers
stole us.
We’ve sung blues prayers
and turned our bodies into drums for joy and Djouba.
We’ve jived. We’ve jitterbugged.”

My uncle’s artwork, a spirit.          One part
of sky’s cerulean while a puzzle of sun shines fine gold
on another. Yellow circles mirror through the Vieux Carre’s
crafted ironworks, and unseen, pointing at God,
the cathedral’s steeple. Its slave-made sankofa transmits,
“Remember us.”

He fired, he laid the 14-karat glaze.        An echo
echoes, “Wade in the Water, children. Wade,” beyond
the Super Dome in the distance.             This picture
belongs to this pair in red. Cubistic
​badasses of the 70s, they jam in a Holly Grove joint, I think,
channeling ironworkers’ bars of music into now,
onto blue and green tile beneath the players’ feet.
Any moment, dancers may bound from their improvised melody,
doing the Manjani, shouting to us, the weary,
“Onward, my people. Onward.”

Poem above shredder,
our dreams deemed disposable
by banks, by legislative bodies.
We hear steel teeth ripping verses,
protest as much as they allow,
and stockpile tape.

She gets up before dawn’s light,
brown-eyes headlines made last night.
That boy, maybe, was not polite
enough to live.

Waiting tables, she overhears
the women’s book club’s white flight fears.
“Weren’t we smart so many years
ago to flee

this city. Blocks turned too black.
But our children have moved back.
We’ve warned of possible attacks.”
Placing plates, she thinks,

Gangs or stop and frisk. Dead child.
Parents have warned them, “Stay docile.”
That boy, likely, wouldn’t play servile
for the police.

She has no children but nephews,
nieces, she shoves in church pews,
hopes she’ll never sit there through
one’s funeral.

The book club, on to eating cakes
with café au lait, commiserates.
“Our offspring buy up mistakes.”
She rolls her eyes.

Their lives must be so worrisome.
Their young, rebelling, buy black slums.
The check.    Free, white, and twenty-one
is still a thing.

I should write more about nothing.
Snatch that privilege.
For a little while, just cuddly light letters, no sharp,
leaden syllables pressing down shoulders.
Ashes and sackcloth, thorny diadem, off!

Black poets
deserve the luxury of writing about nothing—
sometimes—
to speak for no one,
rest on their backs, deep in lush green and gaze
up at the blue and fluffy.

I want to exhale. Inhale. Out, in,
give no account for
every black person in this defecating world,
every damned black mug shot on the 6:00 news,
every black politician waving Jack Horner thumbs,
nor the indisputably black HIGH unemployment rate or
“What’s with the unmarried mamas, the absent papas?”
nor low test scores, disproportionate drop-out rates, manufactured welfare queens—
stay mum on all black slipping, our stumbles in slow-mo on instant replay screens.
No more apologies for flesh: brown-legged girls, bubble cheeks peeking out short-shorts,
brown-bottomed boys with pants drooped around their asses.

“Explain yourself, O’ great, mythic black monolith,” they demand,
and “What does Kendrick Lamar mean?”

No to analyzing the right to say “nigger” or the fight not to ban “nigger”
or to explaining amidst white confusion why they can’t say “nigger.”

I want to write a poem about my love, a red red rose.
I want to pen a poem about fans of budding twigs, too, and fleas.
Will black poets ever at leisure paper the world with umbilical-cord contemplations
then recline on the plush, green mountain, dream raisins in rain, not sun? 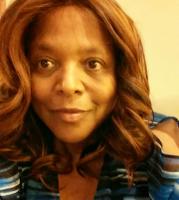 Nordette N. Adams lives in New Orleans, Louisiana, in her late parents’ post-Katrina remodeled home. Her work has appeared in literary journals such as Quaint Magazine, Adagio Verse Quarterly, About Place Journal, and Rattle Magazine’s online “Poets Respond” series. If you should happen to open the Oxford English Dictionary and find that the usage examples for the word “rabid” no longer insult feminists, you may thank or not thank her and other scholars for that improvement. Adams also has an MFA in Creative Writing from the University of New Orleans. You may learn more about her at Her411.com.

Idolatry by Matt Schur
"If the Water Molecules Making Up X Change Moment-by-Moment, Then the Banks and Locale Surely Define a River, Right?" and "When Dad Asked Why I Don't Go to Church Anymore" by Bob King
"Oracle" and "When America's Schoolchildren Feared Khrushchev" by Jonathan Fletcher
Dr. Kipla Broek by Judy Dercksen
"Niobium," "Nickel," and "Neodymium" by Drew Pisarra
Bush rescue by Doug Jacquier
"I fought," "I save stories," and "The end of times" by Matthew Borczon
"Water Rises in Odd Ways and "Landlocked: Near the Four Corners" by Gina Ferrara
"I assure you this is no medicine," "I suppose another passenger," and "Without Seeing" by Nathan Anderson
"Affairs of State" and "Flint River" by Jeremy Nathan Marks
Will Be Boys by James Penha
The Whole Sea by Zoe Leonard
"Abigail Lee’s Sunglasses" and "Startle and Flinch" by Darryl / Dadou / Baron Wawa
"Antifa's Ghosts," "The Lie," and "Why Do Black Men Have to Be So Angry" by Vincent Golphin
United Nations finds pedestrian driver switch = peace by Robert Fleming
The Hundred Thousand Things by Carol Willis
The Shape of Light by Daniel Cyran
The Book that Sells Itself by Erik Bosse
Expiration Dates by Richard Downing
"stagNation," "as felt as heard," and "un nu mb" by Shine Ballard
Sabas by Margaret Cantú-Sánchez
"Gloria la chola," "Por eso estamos donde estamos," and "Survival is learned" by Facundo Rompehuevos
Pinches Bananas by Facundo Rompehuevos
Ice Cream Truck by Karol Nielsen
An Artist Applies by Chris Klassen
Nine Images, July 2022 by Heather Weathers
for Jacqui Disler by Su Zi
Unfamiliar Ground by Peter Cherches
Why Lundquist Stabbed Me by Michael Somes
i’ze gots the post-bastille part-um blooze, 2019 by R.V. Branham
"cooking off the fat," "going," and "forms that perforate routine" by Livio Farallo
"Orlando" and "The Wreck" by Ori Strider
The Promotion by Jon Fain
The Agenda by M. F. McAuliffe
"Sergeant Daria Filipieva," "'Some Casualties,'" and "Voices" by Marguerite Guzman Bouvard
"Horror Stories Have No Subtitles" and "Orgasms" by Kushal Poddar
Daily Manifestation Journal by Pascale Potvin
Towards Silence by Alan Fyfe
"Justice," "Matter," and "History" by C. Derick Varn
"As for the Worm," "Crows, Wolves, Foxes," and "Warning" by Tobey Hiller