The day of the accident, Diane never should have gotten behind the wheel of the car. Not only couldn’t she think on her feet, but she couldn’t cogitate too well on her ass either, wasn’t the best at judging distances, or taking evasive action when required. Could not.

Worse, she’d been rationing her attention deficit meds, having lost another job and therefore health insurance. But when Edith asked Diane to pick her up and drive her to a doctor’s appointment because her car had broken down, Diane said okay. Did she think Edith was sick? Her sister had looked pale, anxious, excited, maybe nauseous. “What’s wrong? Do you want an ambulance?”

“No, you’re the one I need. I want to talk to you about something.”

But then Edith had gone silent, maybe because she knew how nervous Diane got with passengers, that she didn’t always take her Adderall, complained that it caused too much reality to hurtle toward her. How she often needed to look away. Which was what she’d done that afternoon, her focus not on the road, disappearing from the present even as it was slamming into her. Even as her sister was screaming. As is often the case in emergency situations, Edith wasn’t able to verbalize specific instructions, only the prolonged syllable “aaaah,” while simultaneously clutching her sister’s arm. But Diane had been too deep inside her daydream, the one where she was telling the veterinarian of her beloved cat to Stop, I changed my mind, revising the story, making herself brave enough to act and speak, to save her cat from what she realized too late was a too-soon euthanasia, adding on to it a scene where she tells her boss she can’t come in to work all week because her cat is sick, then further elaborating, devising a plan to get rid of the abusive boyfriend who had no concern for her problems, transitioning from meek loser to a woman of strength, wisdom, and determination. Only when the car crashed did Diane snap out of it, disoriented, appalled, grief-stricken, wanting to die.

Within days, the car was deemed a total loss, and Edith nearly so. Diane grieved for her sister, sat beside her in the hospital, waiting out the coma, insisting on maintaining life support until a representative of the hospital’s administrative offices explained the cost. As for the car, Diane never wanted to see it again. Her sister’s organs and what was left of the automobile were donated. Diane began to take public transportation or walked, head down, making a show of her contrition the way she thought a normal person would.

“I’ll tell you something,” said Natalia, offering Diane what she considered a succulent tidbit. “The day of the accident I had an appointment with a doctor, but it wasn’t for medical reasons. I was slotted in for an hour of sex. We were having an affair. I was going to tell you, but chickened out.” The eyes twirled and came to rest at Diane’s feet. “He was married. I don’t think I was killed as punishment for my sin, but if you want to believe that it wasn’t purely your fault, that’s fine. I know I was crap at times. I’m not here for revenge—I’m here to redeem myself by saving you. Just let me do it.”

“Did you kill me on purpose?” she asked. “You and your unpredictable ethics?”

“You could’ve asked to borrow my car or called one of those services. You knew I was a bad driver. Maybe you were hoping to die. Maybe you wanted to punish yourself.”

“I was not trying to kill myself. But I wanted you to drive so I could explain. And boast. You were still my best friend. I had no one else to share with.”

“Don’t worry. I hold myself accountable. If you want, I can be the kind of ghost that performs eternal acts of penance, but that won’t change anything. No amount of goodness erases the past.”

“I haven’t asked for absolution. I don’t want to be let off the hook. Natalia, please give up. Let me win for once.”

The ghosts at the window cautioned Natalia to hurry, reminded her that the dawn of a new day marked the end of her spell as a specter. Could Natalia save her sister or not?

“Give me something to work with,” pleaded Natalia.

Minutes passed in silence. The sisters might have embraced, but that not being possible—or even their habit—they meandered toward the window and looked out, side by side, mulling their respective fates. Ghosts were passing by, visible only to Natalia: spectral adults groaning about their now-grown children, phantom seniors shrieking unheard caveats at unsuspecting strangers, tantrum-throwing teen poltergeists trying to get their families’ attention. Natalia knew she’d been fortunate to have found a receptive audience, a sister who’d argue but stay loyal forever.

“What about a ghost like Marley, in A Christmas Carol?” asked Diane. “Marley’s ghost was wretched when he saw the effects of his miserly ways—which for some reason he didn’t notice when he was alive. His ghost was weighed down by the trappings of life—his old cash box, ledgers, and a heavy purse—but he wasn’t able to come to the aid of a single destitute soul.” She recited from memory the description of Marley’s lot: “‘No rest, no peace. Incessant torture of remorse…wailings inexpressibly sorrowful and self-accusatory…lamentation and regret.’ I’d gladly settle for that as my due.”

“That’s exactly what you’re doing now with your life,” said Natalia. “Are you too stubborn to change?”

“Diane!” Natalia’s eyeballs sped in a frenzy around the room, ricocheting off the walls, leaving comet-shaped smears of mucus in their wake. “You’re making my head spin with your nonsense.”

Diane sighed. “I’ve tried my best. I haven’t got the skin for life. Would you really rather have me wait to die of cancer or stroke, or plummet mental health-wise until I’m institutionalized in some government facility?” There were so many ways for everything in the world to go wrong. What was the difference between now and then except a surfeit of suffering? “If you love me, let me go. Give me permission.”

“We won’t have brains, you know,” said Natalia.

Diane lay on the bed, forearms crossed over her chest, the pose she’d seen in movies.

Natalia nestled in her damp hair, absorbing what she could. “After we’re done ghosting, we’ll be space debris. Sidereal sparks, specks, a couple of cinders blown sideways by interstellar winds. Mindful minus the mind.”

“But still.” Diane’s confidence had grown, blooming in her mind like the lily she wished she could clutch, making a perfect, purposeful picture. She wouldn’t be abandoning a husband, wife, or kids. Or pets. Or close friends since she had none. Or parents, for the same reason. Her decision hadn’t been an easy one, but false hope and delusion had become increasingly untenable as rationalizations for continuing on with each successive day, and had finally run their course. It was time to give up the ghost.

Natalia’s eyes, dull orbs now, normal-sized, swung in a small arc as if to kiss Diane on each cheek. She was willing to fail, too, abandon the relentless questioning whereby she’d been sure Diane would find a purpose, and let her have this triumph—if that’s how she wanted to view it. “You were always in my heart. You would be still, if I had one.”

“I’m glad you’re with me.” Diane trembled, and tears spilled onto the bed.

“You’re scared,” said Natalia. “Good. This shouldn’t be easy.” The shriveled eyes cast pale shadows across her sister’s face. Natalia then reminded Diane that a vial of morphine was hidden between the mattress and box spring, the one Diane had stolen from the hospice after their mother passed. Waste not, want not.

Diane was terrified, then happy, and then it was over. She died in peace, but not before murmuring in a series of rather long, sweet, dying breaths that together they’d appear in the night sky as mysterious wisps of vapor, the kind mistaken for the mystical signs sought by men and women searching the night sky, believers sending up their fervent prayers, ardent wishes, and impossible dreams, hoping they’d be deemed worthy enough to be answered. But as she knew too well, there wasn’t a ghost of a chance.

There was nothing else for Natalia to hear. The fog quietly entered the room, claimed both sisters, and then moved on. 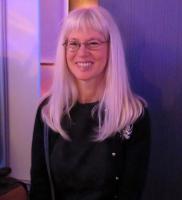 The Reptilican Convention by Rubino del Sur
The Zenith of the Neo-Anti-Environmentalists by Stewart Michael Berg
On reading Kristin Sanders's "Cuntry" by Darryl / Dadou / Baron Wawa
Modern Olympian Odes #27 & #28 by Michael Ceraolo
"I play the fox," "The Three Fs," and "Homicidal Pigeon Fever" by James Cole
My Ghost by Diane Gurman
"Needs," "Fashion," and "It Helps" by Jay Passer
"In the Sunday Night News," "Unfinished Nerve," and "Knife Shop in Port" by James Grabill
"Bright Chanticleer" and "Detective Book Tea" by Jeff Harrison
Billy Luck by DC Diamondopolous
"CC Climate" and "Afterlives" by Rose Knapp
Fragile Like a Bomb by Len Kuntz
An angry teenager, a pandemic, and how a buy-nothing group helped us write a new story by Sarah Gundle
"Resistance is Fertile," "Without a Word," and "Unidentified Satellite" by dan raphael
"Shutdown Payday," "Darkening the Storm," and "Species After Dark" by Vernon Frazer
Six Visual Poems, July 2021 by Diana Magallón, Jeff Crouch, and Jonathan Minton
"In Vino Veritas," "Without a Trace," and "Republic of Tears" by Howie Good
A (Third) Triptych of Poems in the Manner of Tom Jenks’ “Spruce” During the Time of the Coronavirus Pandemic by Clay Thistleton
"Rock n Roll unmentionables," "Center-right," and "Apple pie" by Jeremy Nathan Marks
The Fine Art of Full Body Swimming by L.B. Sedlacek
"Riot," "Jedburg Justice," and "Resolution" by Wendy Taylor Carlisle
Stare the Cloud by Krisztina Rita Molnár, translated by Gabor G. Gyukics
Warrant by Chris Butters
"To Heal the World" and "Your Birth Is Your Fate" by Ethan Goffman
"fata morgana" book release party with Joel Chace, Eileen R. Tabios, Norman Fischer, and Orchid Tierney
"Conspiracy," "Flood," and "Our Aging" by Ken Poyner
Regis Treadwell, Inc. by Jon Wesick
"The Mad Muse" and "The Black and Whites" by Luis Cuauhtémoc Berriozábal
Failure by Borbála Kulin, translated by Gabor G. Gyukics
"A Long-Time-No-See Relative" and "As the Offspring of the Cichlids" by Zita Izsó, translated by Gabor G. Gyukics
The Broken Dumbwaiter by Mark Blickley
Homeless/Hopeless/Helpless by Adrien Kade Sdao
"The Fate of the Victim" and "Security Guy" by Andrej Bilovsky
"rose milk," "somewhat's later," and "in the garden where you told me that you loved bacon and I oinked" by J. D. Nelson
"A psalm for Mr Miura," "Silver Cockroaches and D-76," and "And the sound of AC" by Darryl / Dadou / Baron Wawa
A Sweet Regular Drone by Madeline McEwen
The Patient by Eric Sentell
Paintings, May 2021 by Ron Bennett
"Don't Test Me, Pro," and "Toyi-toyis R Us" by Charles J. March III
Snoop Dogg & Dr. Dre Recommend Sipping Gin & Tonic Juice During These Trying Times by Charles J. March III