During the annual fall trek flying from Canada to Mexico, the Rose-breasted Grosbeaks landed at some birdfeeders filled with dusty, indistinguishable seeds, and, fortunately, at other feeders filled with nourishing sunflower seeds. Before landing, they could guess by the birds and squirrels already gathered at the feeder if it was going to be a filling lunch or just another shit producer.  Almost all the birds dreaded leaving Canada to fly across America this year.  The cold-loving northern cardinals and the blue jays hovered near the suet, relieved they wouldn’t be making the long journey.  “Canadians remember to feed the birds,” they tweeted.  “Americans are lost in a pathetic depression.  Good luck finding food,” they warned.  The migrators ignored their warnings, looking forward to being snowbirds in Mexico, where people keep their windows open so birds can fly freely inside and out, where they can circle the canyons, fly over the mountains, and glide across the coast. But things weren’t working out so well this year.  Flying over the Midwest, early snowfalls buried much needed insects and further south drought depleted the foliage they desperately needed. Americans were so busy filling out petitions to stop the president from doing this or that, and retweeting his most ludicrous tweets with their snarky hashtags added with the hope of gaining more retweets, then grabbing another beer or refilling their wine, so lost and immobilized in their own personal grief,  that they let their birdbaths remain dry and their feeders unfilled, oblivious to the plight of the migrating birds, until the birds startled them by smashing onto their windows while they fixated on the endless world gloom and doom broadcasted on CNN. They’d get up and look to see what happened, and the more optimistic Americans would step outside, hoping to rejuvenate and restore the broken necked birds, while the most distraught humans stood by the window weeping, slipping into another useless catatonic state.  The Grosbeaks learned to find the homes of the elderly. They have lived through much worse, or at least as bad, and as much as they hope to never experience such political and cultural dread again, they faithfully fill their birdfeeders, decorate their trees with slices of apples smothered with peanut butter, and poke orange slices through branches. They fill the bird baths every day before puttering in their gardens, far away from their TVs and phones.  An elderly woman takes a break from working on her compost pile, extends her arms in unison with the flight of the birds, as the birds head to the fruit filled tree. 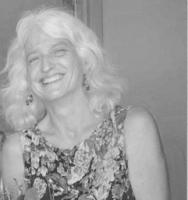