"Madman Above the City," "My Mind Stripped Bare by Its Absence, Uneven," and "Criminological"

Madman Above the City

but before he can change this conversation
let me reveal
how our mad titan doesn’t bring direct destruction:

he contents himself with selecting
what he wants to survive while ignoring
carved rock diverging from one vision,
never smashing statues
while preferring to polish only a pretty few,
like a posh prince or a ship of dreams
as he lets decay lay waste to the rest
so he can’t be accused of taking his hammer
to a museum’s sculptures
with no stone dust on his pants or shirt…
in fact,
his hands have never borne a speck of dirt;
how else can he always mistake his reflection
for vision of an eastern sun so gloriously risen?

No truth,
no answer,
explanation,
or closure:
-Learn to write S I L E N C E slowly in the void.
-Letters become swarming wasps
waging war around your head
in a place
where you’re forced to stand still.

filling empty space and taking its shape so well
the vacuum regains its vacancy
as hollow containers implode.

Fairies rising from fading photos,
show a way inside…
though I’ve impaled them with pins
like butterflies in a frame;

I don’t think the pictures are real anymore

if they ever were

and I don’t believe their reality

if I ever did.

The stages of loss become

Me [filled with determination]: Push through the asteroids and airless distance, past the edge of your universe, to a planet filled with stuffed animals that feel warm to the touch...

Also Me [fearing vulnerability]: …But keep your spacesuit on as you hold them, in case they’re animated by lethal radiation…

…now I’m floating in suspension, far above the world…

Eventually
the main reason people turn to crime
as a way of life
won’t be financial opportunity,
for the most part,
the anxious thrill
of evading capture,
or the freedom in living past the rules
of normal society;
the main thing
that’ll make people
commit to criminal groups
will be a longing for the privacy
and bonding
only available
while working in secret,
the way that lifestyle
forces every interaction
under the radar
into the realm
of in-person meetings,
face-to-face
in parks, parking lots
or the droning noise of a laundromat,
like mafia movies
with a deeper sense of community
than what’s found in legally omniscient
telecommunications
that are as traceable as they are accessible,
unlimited, though rooted in cold distance,
and with an immaterial quality that’s freeing
and formless in equal measure. 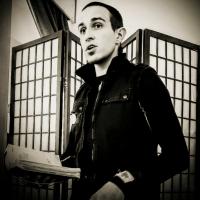 Paul Edward Costa is a writer, spoken word artist, teacher, and the 2019-2021 Poet Laureate for the City of Mississauga. He has featured at many poetry reading series in the Greater Toronto Area and has published over 60 poems and stories in literary journals such as Bewildering Stories, Lucent Dreaming Magazine, Former People Journal, POST-, and the Gyroscope Review. His first full length book of poetry The Long Train of Chaos was published by Kung Fu Treachery Press.

Beginning by Rosalind Palermo Stevenson
Escape 2 by Stephen Page
Nine Paintings, August 2021 by Mario Loprete
"Suddenly 21 Times," "Before Grassroots Closed," and "After in a Florida Motel" by C.O. Moed
"Woke" and "Thrown and Gone" by Heath Brougher
The Reptilican Convention by Rubino del Sur
The Zenith of the Neo-Anti-Environmentalists by Stewart Michael Berg
On reading Kristin Sanders's "Cuntry" by Darryl / Dadou / Baron Wawa
Modern Olympian Odes #27 & #28 by Michael Ceraolo
"I play the fox," "The Three Fs," and "Homicidal Pigeon Fever" by James Cole
My Ghost by Diane Gurman
"Needs," "Fashion," and "It Helps" by Jay Passer
"In the Sunday Night News," "Unfinished Nerve," and "Knife Shop in Port" by James Grabill
"Bright Chanticleer" and "Detective Book Tea" by Jeff Harrison
Billy Luck by DC Diamondopolous
"CC Climate" and "Afterlives" by Rose Knapp
Fragile Like a Bomb by Len Kuntz
An angry teenager, a pandemic, and how a buy-nothing group helped us write a new story by Sarah Gundle
"Resistance is Fertile," "Without a Word," and "Unidentified Satellite" by dan raphael
"Shutdown Payday," "Darkening the Storm," and "Species After Dark" by Vernon Frazer
Six Visual Poems, July 2021 by Diana Magallón, Jeff Crouch, and Jonathan Minton
"In Vino Veritas," "Without a Trace," and "Republic of Tears" by Howie Good
A (Third) Triptych of Poems in the Manner of Tom Jenks’ “Spruce” During the Time of the Coronavirus Pandemic by Clay Thistleton
"Rock n Roll unmentionables," "Center-right," and "Apple pie" by Jeremy Nathan Marks
The Fine Art of Full Body Swimming by L.B. Sedlacek
"Riot," "Jedburg Justice," and "Resolution" by Wendy Taylor Carlisle
Stare the Cloud by Krisztina Rita Molnár, translated by Gabor G. Gyukics
Warrant by Chris Butters
"To Heal the World" and "Your Birth Is Your Fate" by Ethan Goffman
"fata morgana" book release party with Joel Chace, Eileen R. Tabios, Norman Fischer, and Orchid Tierney
"Conspiracy," "Flood," and "Our Aging" by Ken Poyner
Regis Treadwell, Inc. by Jon Wesick
"The Mad Muse" and "The Black and Whites" by Luis Cuauhtémoc Berriozábal
Failure by Borbála Kulin, translated by Gabor G. Gyukics
"A Long-Time-No-See Relative" and "As the Offspring of the Cichlids" by Zita Izsó, translated by Gabor G. Gyukics
The Broken Dumbwaiter by Mark Blickley
Homeless/Hopeless/Helpless by Adrien Kade Sdao
"The Fate of the Victim" and "Security Guy" by Andrej Bilovsky
"rose milk," "somewhat's later," and "in the garden where you told me that you loved bacon and I oinked" by J. D. Nelson
"A psalm for Mr Miura," "Silver Cockroaches and D-76," and "And the sound of AC" by Darryl / Dadou / Baron Wawa