Broken men are an abundant
resource, verdant like spring
kudzu and as useful, filling hours
with primal clay forged of brow

sweat and ephemera that clogs
the gutters of September.  This minor
landscape, still gray and bungled
by natural design, blurs in focus.

Entire nations swell and bloat in
the memory, start to smell of
their pox-marked cities, sand
castles washed away on

artificial beach.  I walk through all
this, like Hansel on a shining path
with his guerrilla armaments, so
much like a bloodied dream, my

shoulders tense and wet from
the pricks of malicious rain.  Ours
is not a beautiful age:  whatever
that means is unclear, and no

age is particularly aware.  So there
is this ocean blooming red algae
that chokes the fish and feelings.
The density of air can crack the bone,

sap the marrow of its fat; my thoughts
rip each apart, caught in the depressurized
cabin.  Labor is the hardest won, unchosen
leisure leaves the muscles brittle:

the monochrome possibilities leave the lens
range narrowed like a razor, the fading of
color sharpens the edges and blunts the
force residing before one war and after

another.  No surprise.  I will lay in the
submissive position, waiting for the arc
of the fist.  I will breathe saltwater and
smoke thick as rancid butter, sputter

my blood thick as concrete.  The mortar
that holds it all together mixed of the
mal-shaped minds of men.  I’ll listen to
magpies and watch women in fuck-me

pumps walk by the boardwalk.  We all
must mend our own spines.  Heart beating
like a breeze blowing down open stairs.
There is no shortage of broken men.

Even love poems have their violence:
The returning golden-rod glow of the sun
drying the fall, tufts of grass browning
on the highway, beneath the Ford pickup
where I held you, plastic lining of the truck
bed pressing on our thighs, indenting and
scraping the skin until our blood droplets

half-mingled from the rash we
mutually granted ourselves.  Sleeping,
I dream of a graying grizzly bear running
at me, running with maul open.  I eying him
with a pump-action shotgun until
my stomach knotted into something
akin to a heart.  The scent of oak,

pine, and sawgrass filling my
nostrils.  In the future, New York
girls would inhabit the dreams,
concrete limping toward the Hudson,
where all winds come with seismic
roar, and Georgia pick-ups will

float away, but for the now, there
is you, mosquitos mixing our blood,
and a coyote baying outside in humid
rutting of the summer night.

What time is it?  Could you take
me home to the chewed-on book edges
and unshaved armpits?  I doubt
you have the time.  The shock will come.

The paper is ripped on the page
of my favorite Alejandra Pizarnik
poem, my ear aches, and I cool
my hand with a glass of anything

hard and cheap.  New Year’s in
Seoul, soon to be divorced, already
long estranged, the wind chills my blood.
Home is where the head isn’t.

The whisky wrapped in meat
and bone, I try chatting with
a blonde, but the conversation
might as well long march into

the next March.  Time slips in
these poems, collapsing in from
New Year to New Year.  Now
I am in the Mexican desert

wandering among the agave
and sun spiders, conversing
with chanates in the cold, clear
sky.  Running out of mescal,

run back to the expat Seoul bar,
and I try to fall into her arms.
Can you be so kind as to take
me home?  I am lost, and so

is she.  She falls on ice in
tights, soju drunk.  Coherence,
her hair dyed red, she speaks
slurred Cebuano and apologizes.

Later, I see the bruises on her legs
as she changes.  You want a love story:
I slept on the floor and watched her
sleep.  The next morning we talked

around the tiny apartment littered
with boxes, the skeleton of her life.
In confusion, everyone’s darling but
I don’t know these buildings.  I don’t

know where the space between space
and time lies.  The December ritual only
does so much when I think I am lost.
The desert wind is cold, the oceans

travel.  Home is where the good enough
sleep, together and alone.  Across the Bay,
I am in California in a hotel crying with
another she.  The ruins on the beach

in the cool winter, the so-called edge
of continent, but we know it all erodes
and bleeds to the beneath.  Would you
be kind enough to take me home?  The

venomous soft jelly stings long after
being dead.  The undersides.  Memory
in the purest hue of gray, unwinking.
The chanate’s chatter distracts as I lie

on the tile, out of mescal, mercy.  In
the distance the sky rumbles—far-off
fireworks or gunshots.  Take.  Me. 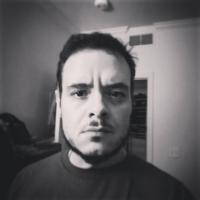