the holiest, the poorest
the weirdest, the featureless
the reverse of corporate advertisement
bustle of the suits in such a hurry to run in place
the yoga mats and clicking heels
the cellular obsession with social media
the newly brainwashed class

above the rooftops they flit like hummingbirds
flame burnishing the air with taint of oil
a sudden shout
a hard-handed honk
a shrill siren scream
Larkin Street, Little Saigon
sidewalk dope fiends
dreams hanging from the clouds like sleepy angels

While Watching You Sleep

I like to get drunk in the morning
because the hummingbirds are awake
because the recycling truck has cranked into gear
because the radio is turned low and you are asleep
and there is nothing else to do.

when has there ever been anything as unlikely,
as musical, as
spurned by the erosion of the sun
as this?

I like to be completely wasted, absolutely incognito,
an extra in a film, a grain of sand on a foreign beach,
a lightning bug in a glass, a post-industrial revolution.

I pace around in the room, I have my
little routes.

I like to walk out of the stairwell
well aware of my posture
reeling yet perfectly reasonable
colors arrayed like targets at the carnival,
I like to get clownish and painted like in the past
like a clown, a harlequin, an aborigine,
a gargoyle, a Godzilla
a golem.

how I fantasize
while you sleep so
unlike anybody lamented,
don’t you see? charged with wild strawberries
blossoms strewn across your brow
juice leaking,
tongues inviting champagne,
silver at the edges of your portrait
a wolf howling in some snow cold wilderness. 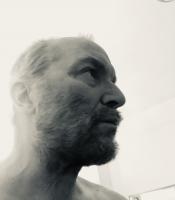 Jay Passer, resident and native of San Francisco, has had work in print and online, appear all over the globe since 1988. He is the author of ten chapbooks, a few still available on Amazon.