In Anticipation of Act II

He’d joined theater club for Corrina Ferguson, even though she was a terrible actress. Stranded behind the curtain stage left, Norman watched her deliver each line with enough bite to curb all fantasies, and yet he couldn’t refrain from staring at her cleavage as each part bounced in time. She didn’t have to be anything at seventeen, and neither did he. They could form staunch opinions only to plead ignorance when these signature beliefs changed at the drop of a hat.

“You’re stage crew, why’d you even show up today?”

“Mr. Mullins wants to go over some cues once he figures out what the hell he’s doing with these idiots.”

“Well do you wanna come outside with me for a second?”

“Then just keep me company. Those tits aren’t going anywhere.”

Rather than argue, Norman merely followed his friend down under the stage and out the back; Bucky cracking the door with a nearby cinderblock. They leaned against the building, a few paces from the faculty lot. “You sure you don’t wanna go into the woods?” Norman asked.

“Why, so they think we’re blowing each other?” Bucky grinned, sparking a spliff.

“This is a stupid idea.”

“Yeah, mostly from smoking up people like you,” Bucky replied. “Now, are you gonna take this?”

“Oh yeah, when did that happen? I must’ve missed it.”

“Last time you dropped me off, I couldn’t handle being home.”

“You’ll get better at it. Besides, when do you even need to be home today?”

Norman considered how little his family relied on him. Both parents were workaholics with his little brother far past the point of admiration. They’d barely miss him in a year, white smoke drifting from his mouth towards the parking lot. Lightheaded, Bucky joked of the day’s refrain; lessons from worn educators barely impacting already soft ground. There was a world outside of town full of judgment and missteps; these faults often sprouting unexpectedly.

Bucky saw her first, strutting with ease towards the same back entrance; a flickering spectacle of womanhood. Norm recognized Mable despite two years and a change in hair color; blonde now dark red. She stopped a few paces from the door as the boys froze, dumbfounded. “I see this is the still a good hiding place,” Mable said.

“How would you know?” Bucky replied.

“So I assume Mr. Mullins is inside?” Mable posed.

“Yeah, why? Are you two dating now that you’ve graduated?” Bucky joked.

Norm exchanged a brief look with Mable if only to gauge her reaction. She smiled at the thought. “Yeah, of course. Why bother with somebody in their sexual prime, when I can screw a forty-year-old bald math teacher?”

“Why are you two dingle berries outside?” Mable gave each a good look over. “Oh wait, never mind. I know.”

“Ya can’t prove a thing,” Bucky said. “Either way, Mr. Mullins is already pretty swamped in there without keeping up appearances.”

“You guys must really suck this year,” she jabbed before checking her phone with a ponderous immediacy.

“You have no idea,” Bucky replied.

“Well maybe I’ll just try him later,” Mable swiped. “There’s this thing I gotta get to.”

She saw right through him. “Why don’t you just come with me, Norm?” Mable proposed.

“Tell them I got sick, alright?” Norm said to his friend.

“You’re really pulling this shit? Both of you? Is this some weird actor thing?” Bucky alleged.

“Stage crew,” the teenager replied, before following her to the parking lot. 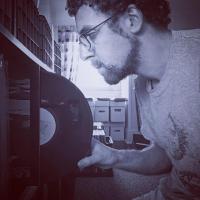 Christopher S. Bell has been writing and releasing literary and musical works through My Idea of Fun since 2008. His sound projects include Emmett and Mary, Technological Epidemic, C. Scott and the Beltones and Fine Wives. My Idea of Fun is an art and music archive focused on digital preservation with roots in Johnstown, Pennsylvania. (www.myideaoffun.org). Christopher’s work has recently been published in Lakeview Journal, Noctua Review, Yellow Chair Review, Crab Fat Magazine, Pot Luck Magazine, Crack the Spine, Foliate Oak, The Gambler, Lime Hawk and Talking Book among others.  He has also contributed to Entropy and Fogged Clarity.