"If the Water Molecules Making Up X Change Moment-by-Moment, Then the Banks and Locale Surely Define a River, Right?" and "When Dad Asked Why I Don't Go to Church Anymore"

If the Water Molecules Making Up X Change Moment-by-Moment, Then the Banks and Locale Surely Define a River, Right?

In some cultures
if the deceased
is cremated,
it’s taboo to spread
ashes in the creek
stream pond lake sea,
as the deceased’s
soul will forever
be unsettled, as
water rarely stops
traveling. But as I
lack a soul—a fact
first floated by
the nuns at St. Mark’s
Elementary—I’m
content with unsettled,
and honestly, a bit
enchanted that
eventually—once I’m
unceremoniously
dumped into the
Cuyahoga—my
molecules will flow
past the fords
floodgates locks bilges
and faucet filters,
and into all of you.
*Raises glass*
So…
cheers.

When Dad Asked Why I Don’t Go to Church Anymore

At first, I replied to his question
with a question, something I hate
and which isn’t necessarily mature,
and could be read as bad faith
or avoidance, but I asked anyway:
Why don’t you instead come run
with me Sunday for 2-3 hours
as the sun lifts over the Metroparks’
shale cliffs & red-winged blackbirds
pose on the dew on the cattails
in the wetlands and everything
from forearms to sycamores
to wildflower sprigs shimmer
with possibility, if only for that
morning until the next morning?
That’d kill me, he responded.
Konk-a-ree konk-a-ree, footfall
footfall footfall. Your sense
of peace isn’t my sense of peace,
and even George Washington
stopped going. First, he stopped
taking the sacrament by scooting
out after the sermon but before
the eucharist, and then once
confronted by the pastor,
he stopped attending altogether.
He worked every day not to abide
hypocrisy, even if his teeth were
fake-in-a-way-but-not-wooden-
and-likely-from-another-human.
Giant asterisk for the slave owner
chewing with slave teeth. What
we don’t always remember is
that history is reliant on memory
and if our memory is selective
then our history is incomplete,
and art doesn’t stop being art
just because it moves underground.
But there, underground, we risk
not being us. Hiding. Is preservation
ever too selfish? When, in fact, that’s
how most culture survived & revived
after all those raids & all those bombs,
no-matter-where & no-matter-when.
Underground. Like the past & present
residents of Kyiv, whose knack for
preserving language & culture is
a masterclass, given their history
of takeover: Ottomans to Romans,
Russians to Mongolians to Poles,
Austro-Hungarians to Lithuanians,
Soviets to Nazis, and back to Soviets
& Russians. Not to excuse the cruelty
inflicted. Never to excuse the cruelty
inflicted. And survival doesn’t always
make one stronger. Often, it just
makes one traumatized. Persons
or nations. Uprooted. The hope
for better treatment because
Khrushchev was Ukraine-raised
turned out to be a delusion,
but it didn’t stop hope. So if
we’re not going to change,
or don’t feel like we can change
others, we learn to fake what
we really believe. Fake, so we
pinch our thumb & index finger
together and slow motion drag
them across our pinched lips,
as if ChapStick, only permanent,
pretending to zip our lips closed,
and then twist an imaginary key
& toss it over our shoulder,
the burden too much to bear.
Our founders didn’t want freedom
from religion as much as freedom
from that particular religion—
they worried about competing
sects getting too authoritarian,
using fanatical belief to bludgeon,
and burgeoning science didn’t
look too shabby, but where
founders had immeasurable
underground battlefield skills,
their courage to resist Rome
or the local snitches, a la Galileo,
was a tad bit wanting. They were
more like Kepler, trying not to upset
the gods or his wrathful interpreters,
so they stuck with science & muted
versions of faith. Yes, absolutely—
you bet I’m judging past morality
based on current morality. Asterisk
because even back then, abolitionist
Tom Paine had conviction. Not-quite-
atheist John Adams had it, too. They
just thought keeping lips mostly
locked and putting it mostly in
writing instead was the best route
toward accomplishing the most
societal good, as, to most, perfection
has & always will be the enemy
of good enough. Look, it’s not my
job to provide excuses for others,
no-matter-where & no-matter-when,
but founders, most folks, nor do I
have a desire for stake-burnings or
living out a castaway existence on
a newly-conquered-not-discovered
Bahamian atoll. Belonging is still
a form of breathing. The fact is,
their thinking developed. Take Lincoln
and some of his first ideas—thank god
he was a thinker under that stovepipe,
as he’s proof we’re not completely
judged by how we start but maybe
instead by how we finish, but yeah
initially he didn’t think the freed
slaves should stay here, and the day
after 1862 Christmas he hung out
those 38 Dakota men in Minnesota,
bitter stiff wind blown east to west
across the leafless, hewn, upturned—
as if palms to heaven— and bleeding
boxelder gallows, poor imitations
of crosses. We needn’t feel guilt
for ancestral sins. Unless we
choose to ignore those ancestral
sins. Mistakes are only wasted
if we choose to never learn nothing
from them. We needn’t misrepresent
our cosmic origins, we needn’t
be fooled into thinking we need
to serve an institution in order
to know ourselves, we needn’t
be the cause or result of dangerous
repression, and we needn’t fill
our lack of knowing with a well
of wishes. Because time is both
an emotion and a religion, I’m
working on becoming emotionally
agnostic because everything doesn’t
need to be done-slash-known right
this very moment. Everything in
the past will eventually morph
into a kaleidoscope of what
will seem like just one moment,
a cubist rainbow rewoven from
seven back into a single color,
a single galactic brilliance,
& eventually we’ll all be past tense,
but for now, in the slowing of this
globe—if I can just slow this globe
& this mind—it’ll allow me to
breathe & enjoy the birdsongs
just a little bit more. 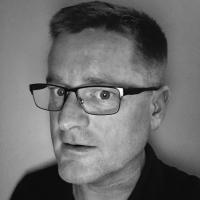 Bob King is an Associate Professor of English at Kent State University at Stark. He holds degrees from Loyola University Chicago & Indiana University (MFA, poetry). His work has appeared in or is forthcoming from The Red Ogre Review, The Dillydoun Review, Emergence Literary Journal, American Poetry Review, Narrative Magazine, Muleskinner, Allium: a Journal of Poetry & Prose, Northwest Review, & Green Mountains Review, among other literary magazines. He lives on the outskirts of Cleveland with his wife & daughters. Bob recommends Colors+ Youth Center, a charity focused on strengthening LGBTQ+ youth and allies by promoting individual and community wellness.