"I Won't Disguise Myself as a Steakhouse for the Wealthy," "All We Want Are the Kicks You Promised for Yourself," and "Memo to the Aging Man"

I Won’t Disguise Myself As A Steakhouse for the Wealthy

Now’s the ascension of the Orange Monkey;
deodorize my ears as he stammers from the Boughs of the Gold-Plated,
and let the Impressionist Tableaux sweating in Los Angeles museums
ooze purple & blue toadstools beneath the oven-sun;
let the clouds yawn, then snoop back into a squint of drought like
a self-puckering asshole seeking the company of polyps.

Enough months of linen and lemons as weighty as a bull’s testicles;
I was spoon-fed a granularity of cardboard and sugar
which militaries use as housing for hurricane victims,
or as hair-dye for a Slavic distension whose breasts
have ballooned memes slathered with mayonnaise.

Now’s the ascension of the Orange Monkey,
and Ariadne’s running amok, gleeful,
in her labyrinth on the sunny side of delirium.

I can despise the fruit dangling from Orange Monkey’s lowest branches,
as luscious as bacteria basting a freshly used latex glove.

Perfume-pump the few words not yet chained,
and let them rise above the topmost branches
before hornets zip them into bits of confetti.
But no one will be collecting the shards of color.
No one—soon—will waltz without a mask.

Mace and a heavy dosage of TNT won’t cure you of necrotic newsreels.

Some say the statues of saints have rang doorbells,
asking for a place to stay,
and if they can crash on the couch.

I try to stay in shape, on my mark,
ready to go.

I explode the host of leather methane-gas-bags;
I tight-rope-walk the eyebrows of crooked stock-charts;
I glue arsenic to the teeth of newspapers kissing mendacities;
but I fail when it comes to a sudden splendor of butterfly,
when remembering why my youth rattles a boxcar across fields below zero,
and I fail when listening to the better wisdom
of a chained dog howling in a warehouse.

Ah! There are some tomorrows too distant,
like sunlight on a bather’s hips, She
who turns the rum galleons back on their heels,
some tomorrows where everything breaks beforehand,
because the Jackals want you to dress up as a waiter
for surgery on broken hearts,
because many clamor for a steakhouse above the slums,
with a neon sign made of polysynthetic flutes & smiling tumors.

Don’t be fooled by that skyscraper.
It’s the Tree of Stoopid,
the Tree of coiffures that code one milkshake for a thousand Bolivian hens,
the Tree of titanium tirades, small orgasms injected into mouthfuls of heartburn,
the Tree with roots that snag 1,000 miles below the ocean’s surface,
only to surface and
froth pesticides into the breast-milk of Icelandic mothers.

Oh the Monkey, he’s Orange, Golden,
like microwaved cough-syrup gooped on canapés of Mandarin nightmare.
Take care, the Dakota fields they combust,
take care, the Antillean isles aching
in their loins like an adolescent kicked to the strip-club’s curb;
take cover the African lion, the domesticated zebra, and the coal of Pennsylvania;
there are gasmasks giftwrapped for you,
projectiles that vibrate and bing at you,
hallways longer than midnight,
painted white,
and that won’t dry their interrogation light
until the Tree of Stoopid blazes, carbonizes, and falls.

What astounds me…
is how the crumple of cry in the lily,
the mitochondria’s steam-engine-chugging & tenacity,
not to mention the seasons’ rusty wheels,
or the burst of blue-whale over surface
then his plunge as his baleen sieve steals
8,000 lbs. of krill,
how all of that
may continue.

All We Want Are The Kicks You Promised For Yourself

The boots that didn’t get me through the tar-pit:
the Angel who didn’t perch on my shoulder
advising me against my transgressions,
Negative Charity, Acute Acedia,
which I thought a mere needle’s tip, not like
Freeway Overpass writhing in its collapse
during an Earthquake, 8.5 on the Richter,
or anaconda twisting in flames.
Angel who wouldn’t lift me
from the cruiser others call the Tedium,
and so my breath unraveled, a scarf worn
as the Ocean Liner now rises over the blue shoulders,
and I pull a Hart Crane, and leap,
and my body dissolves, just a bit
of brine in the expanse of the Atlantic,
and my memories spread,
oil slick across the surface of the wake,
like a blackish page
on which I exhale the long sentence of my life
while Angel flutters above me, inscribing
endless commas in the air, although I could care less
for composition, now that I have spilled
the grammar of an aquatic,
carboniferous, and cannibalistic babble.

Memo to the Aging Men

You sink, slowly, into bogs of internet chatter; your feet
the color of crustaceans slurping excreta. But you have years ahead of you,
some, even decades.  The new sports coat won’t hide the dugs you have grown,
which, like a Yuletide scarf, are itchy-reddish;
you loop them over the nape of your neck, and fold them
over your chest, sleeves of a frat-boy’s pledge,
while your prick winks inward, seeks
parley with bowel polyps.

We’re younger, but it’s too late for recriminations.
We, too, learn golf or grief,
choke the engines of ox-dumb jalopies,
and eat asphalt for subsistence wages.
It’s too late; we’ve no time to forgive, nor
hone a grudge until it sparkles a scimitar.
By night, our searchlights seek your profiles;
in our dreams, you’re still with wide thighs,
boots that thump the meat-roads to mother.
In full daylight, revenge’s the tintinnabulation
of not yet having become you.
Elaborately, you will crunch into sightlessness,
eating tin, slumping in cathedrals of medical plastic.
While we think our frontiers prove impermeable
to cancer, dark wallets, the eventual pang
when roses taste of vinegar.

By then we will have asked our graying selves what
have we left to rant? Which our patrimony?

(Our ears will be snorting anesthesia,
our tongues drooling for stone.)

Fair warning: won’t be fun untangling the stiff hair of silence,
nor these rank gardens in their safe-boxes! 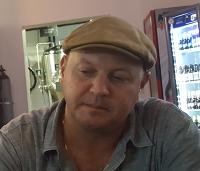 Anthony Seidman is a poet translator from Los Angeles who lived for years in Ciudad Juárez, Mexico, where he commenced translating poets from the border region.  Currently, he divides his time between L.A. and Mexicali, Mexico.  He is the author of I Will Not Be a Butcher for the Wealthy and A Sleepless Man Sits Up In Bed (Eyewear Publishing), Where Thirsts Intersect (The Bitter Oleander), Smooth Talking Dog (Phoneme Media), translations from the Spanish of Roberto Castillo Udiarte, and Luna Park (Cardboard House Press), a translation of Luis Cardoza y Aragón.  Seidman's poetry, articles, fiction, and translations have appeared recently in Huizache, Newsweek en español, Poetry International, World Literature Today, Poets & Writers, Ambit, Modern Poetry In Translation, and The Ecopoetry Anthology (Trinity University Press), Asymmetries: Contemporary Peruvian Poetry (Cardboard House Press), The California Prose Directory (Outpost 19), and Ni Una Más: Poemas por Ciudad Juárez (Amagord Ediciones).