"I play the fox," "The Three Fs," and "Homicidal Pigeon Fever"

I play the fox

I play the fox while some play snails
while some will pawn their holy grails
while others feast on early bird
which forgot the worm, but was the word

No cuck of Christ has ever relied on glass doors
and thank God,
​                        could you imagine the shatter
when Luther’s nails met the pane, and thank
less if it means
we can actually enjoy the body
without the blood, without the second coming’s
gyred guilt trip

Eater of fires divine, of sweet Theresan ecstasy,
where the point is not to fuck, and the point
is driven too long, too deep, that there’s little else to do
but animalize
swallow hot coals and cling to heated brass
that we might boil the sin
out of our prickish hearts

Mr. Kellog, you say you hate sex, but what is it
that makes your flakes so crunchy?
Have you ever considered
bending spoons, cashing royalty checks,
fleeing the purple-lipped skeptics
who have asked us
with inevitable inebriance
to just fuck off

Whatever happened to fucking on?
I’m sure the human race won’t mind
a percentage of bananas and Bonobos
Sharing is seeing, and seeing
is nakedness, not hiding from one’s
own flesh

If you're that worried why don’t you go
soak your dick in vinegar,
that’ll keep you from sucking it

We’d just got the diagnosis and:
shudder and shelter and do what you can
buy rubber bands and ponchos—
prepare for forever, but expect a flash;
the first forty-eight hours are the wettest

We covered our windows with bedsheets,
unpawned our bicycle helmets (the ones
that just won’t sit), and we rehearsed
for the twitch-twitch shit-on-the-shoulder
shtick when the doorbell rang

When the shadow muted off, we dribbled
over, found a mosaic kitchen-knife letter,
and read: CASH F4R GERMS! DIFFUSE  WHAT
WAS USED ON YOU IN THE ENVELOPE PROVIDED
YOU TAKE YOUR OPPORTUNITY LIKE TIME
TAKES ITS TIME TO TELL US EVERYTHING

We sat a while, flanking the fireplace, helmets
shored on dandruff-snowy brows
and wondered aloud how easy, oh so easy
to make a little money with this dove-rough
collusion, these red eyes idolized by others

It’s the telephone company again, she said
exploding with their real-estate You think
they’d make any money were it not
for a bunch of birds like us? And I just
blinked at her beak and searched for mine

Holy shit it's happening! she said,
the words warbled throat-stuck with rubber
undercarriage, scraped like street cant
and I don’t think we were ready
for that livery of avian misfacement

Get ahold of yourself, I coo-cooed
we might miss today when we’re molted bald.
We can only hope and fluff and turn our heads
I took the letter in pinion, eager downed
my ego and spat into the envelope. 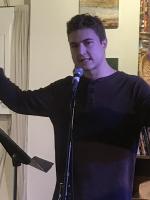 James Cole is a poet, author, filmmaker, and scientist based out of Charlottesville, VA. His written work has appeared in numerous journals and anthologies including Winged Nation, Voice Lux, Artemis Journal, and Vita Brevis’ Pain and Renewal. In 2016 he won The Gallery poetry prize and in 2017 he was a semifinalist for the VWC’s Golden Nib Award. James’ first poetry collection, Crow, come home, was released by VerbalEyze Press in 2019. In addition to his writing, James is a community organizer for the Live Poets Society, a judge for the national Poetry Out Loud competition, founder of the Charlottesville Poetry Critique Circle, and an instructor at Writerhouse.