Gilded smoke and mirrors, television
Nurtures our needs like an aggressive cancer
Connecting over alcohol, muted sound and possession
Missing the criminal over a boxset realised.

Paint barely dry, containing the detritus of fire
Emerging exits slipping out of bounds
Resurrecting your inner idiot, flying at large
An argument never won with a belligerent toss.

Incremental charges on a favourite pint
Taxed for the pleasure, from whom is owed
Dead from the shattering lights overhead
The lonely seeking solace in a box-shaped heart.

Private wittering, emails promising the world
Internet on the quiet, in the snug, on the phone
Attention-rejecting antics spurn the close ones
The quiet ones needing less and less.

Trays of grateful food, as befits the occasion
Looking, not seeing, the situation of the small hours
Feeling the same about one’s betters, hitting ceilings
Triggering psychosis where deemed seemly.

A cautious elephant enters the room
Warning, above others, of a chink in the door
Ahead of teachers wandering, a cross
Born by the unfunny, deluded same.

Presumed guilty, a tag forever sacred
Prospects resulting in a studied fall
Prize for erratic behaviour, needing manners
Put on to show how the system works.

Settling down, swearing by betters
Higher power microscopes the dalliance away
Every move scrutinised, for a better pastime
Being sustained by cheap accusations.

Push the envelope slightly, gulp down boredom
A life more skinned than nose, entertained
By times eschewed, being hung out to dry
Loved at the wrong time, for a greater good.

Recovery at a loss of eventual innocence
Settling down at a good pace, eventual speed
Daily grind cycle at a tearaway’s pace
Behaviour at a premium is forever.

Laughter commencing at a timed-out joke
Dapples away from duty, a central attention
Dissociating where needed, a cruel punchline
Sanity rescued at expense of diatribe.

The unmarked fashion show shows itself off
Paraded through streets of glorious difference
Drinking coffee on a sliding scale
The home stretch always better, at expense.

Being loved is crippling, sitting outside
The voicemail vomits its timely curse
Payment where missed, on pain of heart’s fatigue
Marking monuments as astute landmarks.

Mobile abuse over a silenced communication
Truth over beverage a tiring exercise
Many explanations but the living colour​
Talking over failure, living at risk,

Be that as it may.  Mystery tours
Wind up the discerning, blocking sanity
Expensive destinations rot money
Careering through the menu again

Losing the common touch, retrieved at will
Amplified summers sooth the everyday
A hearty noise welcoming the plebeians
A sickening urge to realise your fate. 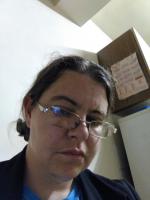 Patricia Walsh was born and raised in the parish of Mourneabbey, Co Cork, Ireland.  To date, she has published one novel, titled The Quest for Lost Eire, in 2014, and has published one collection of poetry, titled Continuity Errors, with Lapwing Publications in 2010. She has since been published in a variety of print and online journals.  These include: The Lake; Seventh Quarry Press; Marble Journal; New Binary Press; Stanzas; Crossways; Ygdrasil; Seventh Quarry; The Fractured Nuance; Revival Magazine; Ink Sweat and Tears; Drunk Monkeys; Hesterglock Press; Linnet's Wing, Narrator International, The Galway Review; Poethead and The Evening Echo. Patricia recommends Pieta House.

"What Will Not Let Itself Be Washed Away" and "Four Variations and a Theme" by Richard Jeffrey Newman
Covid-19 Journals, June 3 and July 12 by Judy Katz-Levine
Crazy Times by Travis McGavin
Princess of Records by Sandra Arnold
On reading GennaRose Nethercott's "The Lumberjack's Dove" by Darryl / Dadou / Baron Wawa
Meditations 77 and 79 by Susan M. Schultz
Poem for Philonise Floyd by Kevin Gallagher
"Anthracite" and "Lamina" by KJ Hannah Greenberg
"that dracula crap," "the doctor of trenton is the same answer as the rose," and "the day of the rising huh" by J. D. Nelson
Drawing While Black Revisited by Maurice Moore
"Places in Dreams," 'O aberrant phrases say pants in a wrecker...' and "Memories of the Star-Spangled Banner" by Michael Ruby
“Passage” and “Piano Exit” by Ilari Pass
Stages by Zsuzsanna Peremantoni
"Political AF" Virtual Book Release Party with Tara Campbell, Hannah Grieco, Monica Prince, and Amber Sparks
Chipped Labour by Sultana Raza
"Golden Rue" and "Birds" by Jeff Harrison
"Assembly," "Hunger," and "Internal" by Mindy Levokove
On Design by DeWitt Henry
Scene from a Box by DB Cox
"the american way," "friday night in the drunk tank," and "night in his eyes" by DB Cox
"As a Data Point," "Bureaucracy," and "Business" by Ken Poyner
"Putin's Eyes," "A Gentle Flip," and "Ode to the Bronx" by Regina Jamison
"A Drowning Person Does Not Ask 'Is This a Good time?'," "Treble Clef," and "I Listen to His Eyes" by Sheila E. Murphy
"Not Usually," "Before the Signs," and "These Increasing Spirals" by dan raphael
"Exposed/Faulty/Gone," "Gr-r-reat/Hubris/Impervious," and "Idols/Jesus/Kleptomania" by Scott Wiggerman
"The Long Arc of History," "Not As Easy As It Sounds," and "Round and Round We Go" by Michael Cocchiarale
"The Other Half," "Excerpt from an Unknown Last Act," and "Then Your Pet Hamster" by Matt Morris
"Occiput" and "Red Code Warning" by L.B. Sedlacek
One of the Guys by Bruce Taylor
"Share Your Visions" and "The Figure Outside" by Luis Cuauhtémoc Berriozábal
"A Warning to the Mild," "How Soon?," and "Skin" by Mark DuCharme
The Inevitable by Marc Frazier
"Dead-End Loitering..." and "Insular" by Alisa Velaj, translated by Arben P. Latifi
"For My Wife," "American Philosophy," and "Bald Head Sally" by Zev Shanken
Nine Paintings, August 2020 by Elizabeth Pratt
"when a river flows..." and "whisper & smoke" by henry 7. reneau, jr.
Someplace Without Washrooms by Alfredo Salvatore Arcilesi
"the feeling," "the fine art of kneeling," and "[can you tell me where it went wrong?]" by john sweet
"Bag," "Jesus Loves You," and "In Perilous Times" by Wendy Taylor Carlisle
"Branches Shaken by Light" by James Grabill reviewed by dan raphael