How rank their run these con men who crowd in gangs, pawns too proud to see that dang orange moron. He has a plan to land us in calamity. He uses an app for that. Some conject this jerk has run a dang hellish con, that he is yellow to his core and will hand us a hand job, a poly-glot of not, of rank, of thankless revenge. A true con man, loud, the sum of slurs, sour apples, cannot drown out the gong sound. The app exists, for revenge, for rousting out the sound of his yelling ground swell, tearing kneeling teams apart in sour arcs of swart. You know the plan is to con us, to drown us in cum, mar our tank tops as we run. He has an app that flounders me in dopples, in gangers. Hello! I do not wish to linger. I dream of  revenge that rankles, of gongs bonging when the time is up. I have heard that you can download the app. 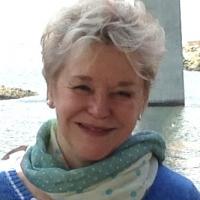 Elizabeth Kirkpatrick-Vrenios' award winning chapbook, Special Delivery, was published in the spring of 2016.  Nominated for a Pushcart award for 2019, she has poems published in various anthologies including Stories of Music, Love Notes from Humanity, Hudson Review, Poeming Pidgeon, Passager, NILVX, Unsplendid, Scissors and Spackle and the American Journal of Poetry. She is a Professor Emerita from American University, artistic director of the Redwoods Opera in Mendocino, California, and has spent much of her life performing as a singing artist across Europe and the United States.