The meteor, pulled by Earth's gravity out of cold space, blazed through the black sky and thumped down hard in the backyard of the small house of Frank and Jolene Logan. The seismic impact lifted Frank from his bed, out of a dream that was in the process of fulfilling his fantasy of flying over the rooftops like a bird.  Frank arched away from the bed and thudded down hard on the floor. The same for Jolene. But the couple's little dachshund, Rusty--smaller and more launch-able than his owners--hit the ceiling before she fell back to Earth.

"Son-of-a bitch," Frank said, as he gazed out the sliding glass door, at the destruction of his back lawn.

"Sweet Jesus," said Jolene, peering over his shoulder as he slid the glass aside, allowing Rusty to burst outside to protect his territory, and blindly dash into the airspace out over the edge of the smoking crater, into an area of altered gravity, where, by the light of a grinning moon, he floated as if suspended in a fluid, amidst the levitating blue globules that formed up from the flow of water shooting from the severed sprinkler pipes.

Frank turned on the outside light and he and Jolene stepped out onto their patio and gazed at the crater. Jolene saw a future swimming pool; Frank saw Rusty swimming in the air, and he thought about his flying dream coming true. He shuffled across the patio in his pajamas and stepped out over the small abyss, sank two feet then bounced on nothing, and rose to the level of the rooftop, as Jolene went to the garage to get Frank’s shop vac, to suck her frightened little dog back home.

Then the police came, and a couple of television news crews arrived shortly thereafter to shoot footage of Frank Logan floating over his backyard like a space station astronaut. Then the military stepped in and sent soldiers to guard the site, and the university in San Diego sent in a professor and a half dozen students--who wore weight belts, like SCUBA divers--down into the hole to shift the dirt for meteorite chunks, as the incident went top secret, and the news flow shut down.

But initial newscasts were already out there, and the impact of the meteorite and the subsequent gravity alteration had the traditional fifteen minutes of fame; but its lasting legacy was the baby conceived in the crater, the offspring of a pair of the rock-shifting undergrads who had been unable to resist the possibilities of Zero G, with a wee hours coupling on the second night of the dig that resulted in the eventual birth of a child who was, before he could walk, able to fly, as Frank Logan always did in his dreams. 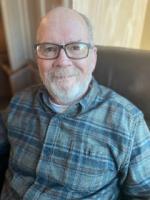 Dan McClenaghan is employed at All About Jazz as a music reviewer and editor. He has been writing short stories for thirty-five years, and was once nominated for a Pushcart Prize. Most of his fiction successes came pre-computer, when he typed up his stories then ran down to Kinkos to make copies and buy big envelopes so he could mail his writing to various small presses.