"For My Wife," "American Philosophy," and "Bald Head Sally"

Philosophers had become so dense that aphorisms took over
like hungry busboys clearing a banquet.
God is dead; hell is other people; I think therefore…
One busboy copped more leftovers than he could devour,
so he packed them up for his family.

At home he wakes his wife as promised.
They delight in the clichés and leave some for the kids.
The big brother wakes up first, eats the cannoli, stereotypes, and apple pie.
When his sister joins him, she gets a chicken breast with one cliché left,
a lamb chop without the eye, and a fish too trite to debone:
all the nourishing maxims nobody else wants.
Her children invent feminism; his kids, free love.

Well, I saw Uncle John with bald-head Sally
He saw Aunt Mary comin' and he ducked back in the alley,
oh, baby / Yeah baby, /  woo, baby
Havin' me some fun tonight, yeah

Only now, after reading obits,
watching confessions on Letterman re-runs,
and live performance meltdowns from 50 years ago,

do I get why Long Tall Sally has no hair and
why Little Richard’s gonna have some fun tonight
for betraying Uncle John’s closet to Aunt Mary.

Only now, after weeding with masks
on this cold Covid19 Mother’s Day afternoon
do I hear in this anthem to misery, incest, betrayal and drag,
the voice of the preacher from Holiness Church, 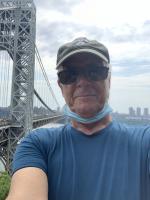 Zev Shanken is working on a book of poems with Steve Zeitlin that explore the relationship between poems, jokes and folk tales.  His poems have appeared in The New Verse News, Brevitas Festivals issues 10 – 20, Brownstone Anthology (2012), Weathered Pages: The Poetry Pole, Yes, Poetry, Jewish Currents, The Red Wheelbarrow issues 10, 11, 12 and Pooled Ink.  His two full length books Memory Tricks (2016) and If I Try to be Like Him, Who Will be Like me? (2019) are available on Amazon. He is a member of the on-line poetry group, brevitas, and curates a monthly poetry reading, Thursdays are for Poetry, in Teaneck, New Jersey.