Muslowski did not vote Clinton for President in 1992.

“Ms. Bullock, if I had U.S.A. citizen papers to show the voting administrator, I would have voted Bush The First. And Reagan The First and Second too.”

Muslowski was, once again, easing his bare elbow over the common chainlink fence. A water hose in his grip spouted like the Navy Memorial Fountain. Bullock was leaning on her garden kneepads and planting heirloom tomato seeds in the musty spring soil. Pacifist that she was, Bullock tolerated Muslowski’s verbal op-eds more than most homeowners on Ganado Street. All told, Muslowski was a good neighbor, just a constant talking one.

He kept a wet jelly in his crewcut. Up close his hair looked like a half-radial of thin yellow teeth, and from the distance of another backyard he was as good as bald. Although he was someone who wished to look most American, his thick-rim eyeglasses were a style that might have been handed off in charity upon boarding the airplane in Lithuania. Stiff, blue jeans and an offbrand polo shirt made him a grown man who was following badly the vicissitudes of American fashion. Muslowski was stout and he showed his desire to be a taller and more official man by opening the master valve of his productive mouth.

“Did you know, Ms. Bullock,” Muslowski said in rhapsody, and propped his mud- speckled chin on his fist, “in Lithuania I and Ugnė marched in The Singing Revolution?”

“Um-hum,” Bullock murmured, and pushed a sweaty braid of hair back up under her bandana, “you’ve told me many times.”

“Aa, our oldest daughter was newborn then, and Ugnė marched to our state television tower in Vilnius with the baby in a haversack. When we got there, hundred-thousands formed a citizen wall against tyrant Soviet tanks and soldiers who were going to grasp the tower. Our weapons? The collection power of men and women voices singing the great national songs. Bush The First heard our singing. I salute this man for freeing Lithuania from the Soviets. Was I lucky Cousin Sofija lived here in Colorado, U.S.A. to sponsor my family immigration? Yes, but I give credits to Bush. Who else but the Protector of Panama? The Liberator of Kuwait! I was first to call Bush the U.S.A.’s Jonas Basanavičius, even though Pueblo Post-Standard refused to print my dispatch. This man, as President, gave me a first job at Pueblo Fuel & Iron. Ugnė, a job at the Colorado Penitentiary. We work hard. We study hard to become citizens. Learn all the U.S.A. laws and regulations. You read the news, Ms. Bullock, that President Nixon the First and Second has died? April the 22nd, 1994.”

“I went to college in the sixties,” Bullock said. “I know all about Nixon. He died a darn month ago, Mr. Muslowski.”

“Aa, twenty-eight days ago, Ms. Bullock. Everyone knows because the U.S.A. flag on my house, 3847 Ganado Street, will fly two more days at half the mast. Thirty days half the mast is the correct number when our President dies. Did you know that, Ms. Bullock? And you have probably been a U.S.A. citizen all your life, is this right? I am learning all the rules. You know who does not know the rules? Mr. Moralez, 3850. His U.S.A. flag flies rain, snow, and through the dark night. When President Nixon died, Mr. Moralez’s flag was half the mast for just a week! I do not like to report about neighbors, Ms. Bullock, but many on our street take the meaning of freedom wrong.

“In Lithuania each house was forced to fasten a photograph of the Lithuanian-Soviet Flag in the window. Upon independence, I fastened a photograph of the Free Lithuanian Tricolore. Then the Catholics became our tyrant. They said everyone must kneel to the flag of the Vatican or you are only free to leave the country. Catholics were more Stalin than the Soviets. The Soviets occupied our country, the Pope occupied my neighbors inside their minds.” 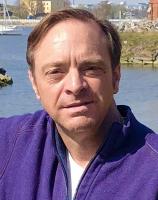