Yeah, that’s the one. It’s got all these fucking houses and streets and shit, you can buy them with play money. Fucking game. I get out of here, I’m not going to be playing a single goddamn game ever again in my motherfucking life. Get my ass a fucking job, anybody hire me. I am fucking up to here with the motherfucking games.

Let me tell you. In here? Fuck. Let’s see. I played No I Don’t Wanna Be Your Goddamn Girlfriend. I played Goddamn But This Swill Is Tasty. I played Doctors? We Don’t Need No Fucking Doctors. I played I Like Sleeping On The Fucking Floor. I played The Guards Are Motherfucking Bitches In Cop-Drag. I played Party Time In Solitary Confinement.

I did not play Get Out Of Jail Free.

Or ladies. Damn the ladies. The lady guards are the worst. They think they have to be so goddamn tough because they missed out when God was handing out dicks. Shit. They don’t know how lucky they got it, to dodge that one. A dick’s nothing but a goddamn nuisance.

And Solitary Confinement? It does not exist. You got Admin Seg, Disciplinary Seg, and PC. PC as in Protective Custody. PC as in, you get your sorry ass into PC and you may as well tattoo “Kill Me” on your motherfucking forehead. PC as in Punk Central. PC as in where all the skinny little whoreboys who like to take it up the ass go. PC as in where can we put all the goddamn baby-fuckers so the rest of the motherfucking inmates don’t strangle their sorry asses in the night after the COs open the cell doors and pretend not to watch. PC as in Downtown Snitchville.

And it does not matter one single little goddamn bit if you’re not a cross-dressing whoreboy or a baby-fucker or a scumbag snitch, if your sorry ass ends up in PC, you better be goddamn grateful if they keep your motherfucking ass on lockdown twenty-three seven.

And even then you’re not gonna be “safe.” You’re in the motherfucking jail. You’re never gonna be “safe.” The big-ass CO bitches got the key to your cell. Go figure how fucking “safe” you are.

The only ones who can go into PC without having to watch their motherfucking backs every minute of the goddamn day are the crazy ones. I mean the really crazy ones. Everybody in this goddamn place is crazy, but the really crazy ones, like the psychopaths who grab you by the throat if you get too close, or the schizos who hear the voices that tell them goddamn, I don’t know what, but telling them stuff like hurt themselves or hurt other people—those motherfuckers are right at home in PC and there is no one who is going to fuck with them.

Except the COs, who will fuck with everyone because their sorry lives are so fucking pathetic. I don’t get what’s going through the head of anyone who wants to be a CO. I mean, man—a motherfucking jail guard. Does anyone in their right fucking mind grow up wanting to be a jail guard? Imagine that—some sorry-ass little punk telling his momma, “Momma, when I grow up, I wanna be a jail guard.” Shit.

And what’s Momma gonna say? I mean, it’s not gonna happen, there’s no little kid who’s gonna tell his momma he wants to grow up to be a motherfucking jail guard, but if he did, what’s his momma gonna say? “Oh, okay, Joey, why do you wanna do that?”

And what’s little punk-ass Joey gonna say? “Oh, Momma, I wanna wear a uniform and be poor and hurt people. I wanna come home from work every day pissed off at the whole goddamn world, with every inch of my clothes and my skin and my hair stinking of the jail—oh excuse me, I mean the Detention Center—and stinking of the inmates and stinking of the disinfectant that gets poured over everything and doesn’t disinfect a goddamn thing. I want that, Momma, I want that more than anything.” At which point Momma says, “Fuck that bullshit, boy, I’m taking you to the doctor.”

Shit. She could take him to see the jail doctor, the jail doctor say his ass is fine. Jail doctor wouldn’t even need to look at him to make the motherfucking diagnosis and send him on his merry fucking way. Take down his name and number so that when little Joey is old enough, a little follow-up could be done on his childhood desire to be a motherfucking jail guard.

But you know it does not happen. I mean, the bit about any kid wanting to grow up to be a jail guard, or a fucking CO, or a fucking Angel of Mercy and Compassion or whatever the fuck they want to call them. Nobody grows up wanting that. Nobody makes that their fucking dream in life. So you know what that means?

Damn straight you know what that means. Think about it just a second. It means that every motherfucking CO is a loser. Every goddamn one of them wanted something else in their sorry-ass lives, but jail guard is where they fucking ended up.

And these losers, these guards, these so-called “Corrections Officers,” what are they doing? They’re guarding the only motherfuckers who are bigger losers than they are—the goddamn inmates. It’s the fucking losers guarding the fucked losers in this fucking shithole.

It’s not a jail, this place. It’s not a motherfucking Detention Center. It’s the goddamn House of Losers. And you sure as shit don’t get out of this fucking place for free. 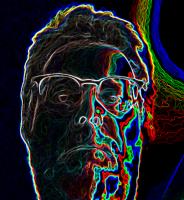 Tetman Callis is a writer living in Chicago. His short fictions have been published in various magazines, including NOON, New York Tyrant, Wigleaf, Salt Hill, Atticus Review, and New Orleans Review. He is the author of the memoir, High Street: Lawyers, Guns & Money in a Stoner’s New Mexico (Outpost 19, 2012), and the children’s book, Franny & Toby (Silky Oak Press, 2015).