My childhood was spent in my mother’s studio, watching her adhere little objects to shapes formed in clay. She took me on guided tours through art books, from the sculpture of Louise Nevelson, with whom she’d gone to art school, to Georgia O’Keeffe, into whose paintings I’d drift.

One Saturday, we were interrupted by an uproar in the street as a mob jeered a shackled man. The police did nothing to shield this man—they paraded him. I followed my father to the porch. “Get back,” he yelled.

The face of the man haunted me for years. Crime was rampant in the city and we lived in fear. My brother and I, left with a babysitter, heard noise in the backyard. We hid in the attic, playing a game with the babysitter, putting the pet mice on the turntable of the record player and watching the effects of centrifugal force.

But the noise wasn’t a burglar, it was an old man who’d wandered off from the nursing home. He wore only one shoe. Later, I locked the mice in a decoupaged lunchbox to research the effect of light deprivation.

When my father drove us over the bridge, I was terrified it would open and we’d be swallowed into the abyss. Growing up in the city, you never know when your time is up.

In my early 20s, I descended an escalator into the bowels of the subway. The train had just departed, and a frail woman remained on the platform. I saw her white hair go up as a man pointed a gun. “Don’t move,” he said, and although my brain told me to listen, my body fled up the escalator.

I never went back to see if the lady was OK.

I had once been solipsistic, just like that girl with curly hair who saw me in terror. There was no one but the three of us.

To them I was a little old lady with money in my purse, hair standing on edge. For me, it was just an obstacle to getting into my studio, working my hands into clay, my tools into wood. My sculpture, found objects embedded into oblong ceramic forms, was considered phallic by some, but my intent was to create peace totems. Georgia—whom I’d met in my 20s—had the same problem, with people reading sexuality into her abstracted forms. Georgia was aloof, but when I hung around her long enough, she’d talk about things I could pick up. Or people I could connect to, like Louise.

Louise was also at the Art Students League, but I thought of her as my teacher. We went to visit her family in Maine. My parents also emigrated from Russia, but adapted to American ways. Louise’s father had a junk shop and her parents still dressed like they lived in Russia. Her father carved woodwork from scrap.

Back in New York, it was as cold as Russia or Maine. Louise had no money to buy wood for the furnace, so she’d trawl the streets for whatever could be burned. But we’d find things too beautiful and precious.

When my father called me a no-good tomboy, I retreated to my room and pretended to be Georgia O’Keeffe. I had a studio assistant, Juan, whose bronze and ceramic spheres were perfectly smooth, like rocks that had been burnished over millennia.

When Juan first turned up at Ghost Ranch, he could have been the shackled man. He was long haired and unaffiliated—I barely noticed him.

“I've been absolutely terrified every moment of my life—and I've never let it keep me from doing a single thing I wanted to do,” Georgia told him.

I, too, had a companion for 13 years at the end of my life, although he wasn’t with me that day on the subway. An uncle had wandered off from the nursing home and was found in a backyard, wearing only one shoe—my Juan had gone to help him get resettled.

Later, in bed, he recounted how, as a teenager, he’d been asked to babysit. After the parents left, the boy and girl took him into the attic and showed him their pet mice. The girl put the mice on a turntable, then set it to 78 rpm.

When they were done spinning, she put the mice in a lunchbox and clicked it shut. She told Juan she was experimenting with light deprivation.

Then the children took him back downstairs and watched a cartoon in which a masked man pointed a gun at a lady. Her brown hair turned white and stood up. Shirley Temple appeared. When she saw the man with the gun her mouth opened in a big O, but no sound came out. The cops came, and Shirley Temple went back to the white-haired woman, who lay on the ground. She scooped her arms under the woman’s lifeless shoulders and saw something fall out of the woman’s pocket. It was an oblong totem made of tiny shells, pearls and buttons. Juan was fascinated by the object, but was never called to babysit again.

Juan stuck his hand inside the lady’s purse and pulled out an oblong shape. It was rough in texture, and at first he thought it was a piece of coral or sedimentary rock. Tiny, delicate, with little things all held together by a substance from the earth’s mantle—it was what he was looking for. The white-haired lady watched as the police shackled him and took him away. 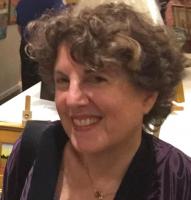 Ilene Dube is a writer, artist and filmmaker. Her short fiction, poetry and creative non-fiction have appeared in Atticus Review, The Grief Diaries, Kelsey Review, U.S. 1 Summer Fiction, Huffington Post and others, and is forthcoming in The Oddville Press.