April 30th, 1975, on government business (CIA) in Australia, I looked left in Brisbane when I should have looked right. I was coming around to a strange new angelic state of mind, trying to figure out how I came to be in a warm, bright pool of intense light after just stepping out of a bar. In sudden lucidity, I realized that I had been killed, really smashed, by a truck. I could see a couple of figures nearby like me, different than the more well-defined figures of the living. I hailed one of these fellow spirits who helped a bit. To summarize; I was dead in a foreign country. I had no capital in the spiritual world and no place to stay.

So, I went back to the scene of the accident and sat on a shimmering curb while they collected my remnants and rode in the ambulance to the morgue hoping to discover what the other stiffs were doing. The morgue was surprisingly lonely. After dying the locals must have headed to some happy home to haunt without any curiosity about their remains.

I thought I would accompany my own body to the U.S. But after a couple of days, I found out I wasn’t going back. My family had instructed that I be cremated and disposed of in Australia. What? No big funeral? No family gathered all around. No tears?

I was getting very hungry. For what, I didn't know, but I was weak with hunger. I was beginning to look transparent. I met a spirit from Tokyo, who said he had dead relatives in Malaysia. He thought he'd try to get to Malaysia and keep them company, would I like to come along? He explained my hunger as the need for memory to keep me around. That was my sustenance. As soon as people stopped thinking about me, I'd just disappear through a couple layers of continuum and end up surrounded by complete strangers with all their relatives in what was going to be eternity. No chance for Heaven, “…if there is one”, he said. If I stayed I would be caught forever, amongst a minority of Aussies, surrounded by eons of angry aboriginals. Not my idea of a good eternity.

That's how I ended up in Malaysia. Then things got weird. There were a lot of dead, recent dead and local dead streaming all around Southeastern Asia in anguish. They couldn’t rest or be with their ancestors because they'd been killed in war. It was necessary that the perpetrators, be confronted, and vengeance extracted. As I made my way across Asia, I found millions and millions of spirits and they all wanted directions to Washington, D.C.

I started working with some Russian kids whose disembodied minds were starting to pop out here and there. They had learned there is a fourth dimension by watching the static of old televisions and now were experimenting with ways to travel through holes in the continuum using the swirls and patterns. They were networking and mapping. They were influencing other technically minded kids all over the world as they discovered they could control events behind the fabric of everyday life, sort of like mice in the wainscoting. A mind I befriended said they had gotten a U.S. President to unexpectedly not run again. “You mean Lyndon Johnson!” The kid nodded sympathetically. He and other dimensional entities, as they played around in the edges of this cosmically big space, had accidently found Johnson, and had gotten into his head.

Since I was in the ether, he thought I could help with their experiments. Ultimately, through trial and error we established a map of the space behind the world. With the map we charted a path and then bridged the gulf from point A to point B. That's when I organized the disenfranchised spirits of Asia. And as I enlisted all those war dead, they piled on, one after another, creating a single file psychic bridge which I led, carrying my friend's mind with me on my shoulder like a parrot. I went directly to my hometown, Washington, D.C., exited out into the office of the Speaker of the House, and then my bridge, starting from all the way back in Vietnam followed me in. I figure that conduit is still wide open. And I can say, with certainty, we should not begin any new foreign wars. There is not enough room in D.C. There is a very large constituency already milling there, and millions more spirits arrive every day, filling all American spiritual space with angst and anger.

Anyway, as for me, I had nothing left to do but go home. My family was gone. On vacation to Bermuda. As for my continuation in the continuum it turns out it is my dog keeping me alive in this current state. It worries me. The dog is old, and sick. I'm in no rush to change my state. I have no idea what's next. I'm afraid I'll find unsympathetic angels processing forms at a chaotic port, perpetually filling, in a single file, the last boat sailing for heaven and thousands of souls clamoring to get aboard. 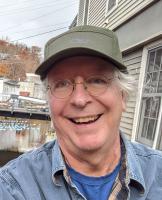 A graduate of Syracuse University James Stuart Nolte was the recipient of the Undergraduate Prize for Poetry in 1975. His writing, including fiction, poetry and arts criticism has appeared in various newspapers and literary journals. A librarian with more than 50 years’ experience, he lives and works in Montpelier, Vermont.