Neither my daughter, Ruth, nor my son, Dave, ever knew grandfathers.  Shortly after I met Connie, my wife, her divorced father died.  My father died after we had been married, but before Connie’s pregnancy with Ruth.  I did take Dave as an adolescent to Colorado to meet my brother Jack, who was his uncle, but who at twelve years my senior had been like a father to me.  Ruth had known Jack too, somewhat.  He had visited us in Watertown and read books to her as a child, then taken her up with us in his 1939 Staggerwing, which he had flown to Hanscom Field.  Later he visited us in Iowa City where I was teaching one summer, and Connie and both kids had driven out to join me in my mother’s old Buick.  However, having grown up with friends who had real, living grandfathers, Ruth wanted her own children to know me, us.

Ruth gave birth to Eva in Cartegena, Colombia, as a single Mom.  The father, Khari, a  hip-hop performer and kick-boxer, was a deadbeat.  Ruth had left the relationship and taken a Fulbright to Colombia; then had learned that she was pregnant. Connie went down for the birth.  Ruth and the baby returned to Boston and lived with us, before trying to live again with Khari.  When Khari couldn’t pay rent, Ruth first moved to her own apartment, then took Eva back to Cartegena, where they lived in an artists’ hotel.  She met Diego as a tenant there.  He made jewelry and studied history at the university.

In Boston, Eva had fixated on me.  With Ruth, I walked her in her stroller along the Charles River path, one of my running haunts.   Eva and I cuddled and watched TV, especially the Berington Bears Show, where Eva studied the father bear and his difference from Poppa Khari, who only made occasional, glad-handing visits to our house and took her for trial overnights.  I sometimes called her Ruth by mistake.  I read books with her and watched her grow.  Now she chose Diego for her father and conspired with him to propose to her Mom.  Connie, David and I went down for the wedding, along with some Boston friends and Connie’s brother.  Eva was the flower girl.

Soon Ruth was pregnant again.  She and Diego had rented a house, which we helped them later to buy.  Maya was born, and after visiting to help, Connie brought back pictures of her.  On my Spring vacation, while Connie worked, and Dave was finishing his MA, I made the trip alone to meet the baby (now almost four months) and to bless their settled life.  Ruth taught English and Diego made designer lamps from gourds, to be sold in the States.  I slept on an air-mattress in Eva’s room.  Diego was welcoming, although we could only communicate in gestures, since I lacked Spanish and he English.  They had their routine.  Holding Maya’s 4-month-old, fresh gaze, I thought of cycles.  Eva was a school girl now, wearing her uniform for second grade and helping to care for her sister.  “Which do you like better, Boston or Cartegena?” she asked.  I liked them both, I said, but Boston was best for me because it was my life and work and language; but she was lucky to have two worlds where most people only have one.

Ruth and Diego both believed in social justice and in hip hop as a medium for change, especially as it voiced impoverished youth.  They had begun collaborating on Diego’s lamps, with Ruth sketching out designs on the shell of each gourd, which Diego then drilled, and Ruth next painted in bright colors.  When furnished with an interior socket and bulb, the lamp cast designs of light and shadow on the ceiling and walls.  Diego took videos of Ruth’s performing her lyrics as well and posted them to Youtube.  Diego’s workspace was in a corner of the kitchen, where he kept a computer, speakers, and his tools.  They struggled for private time and sometimes worked late at night. They shared friends, and welcomed guests.  They had a paying boarder in a room upstairs. 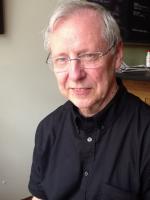