"Checkpoint at Del Rio," "Bay of Pigs, Cuba," and "She Never Liked Communists"

Just above Mexico along the highway,
bluebonnets luxuriate in the fields,
acres of tiny blossoms wave to me.
Loaded with deer corn,  my truck revs, untroubled.
I love my coffee mug, steaming on the console.
I love the taco stands with long lines of kids.

Border Patrol sirens stop me.
Black loco dogs bash at my windows,
growling for weed and aliens.
The officers couldn’t be nicer to hunters.
Please sir, yessir, thank you,
and I roll on to my cabin.

Plump cedars spread green over distant ridges
inviting illegals to march north
searching for cool hills.
But my land is cracked, rocky, tough on your heart.
The sun is lonesome, blisters flowers, roasts gullies.
Citizen or not, native or not, the bleary sky will forsake you.
Sometimes I leave water out for them, and rice.

A thousand exiles stole over the Caribbean sea
in perilous boats, longing for  papaya and guava,  for coffee,
sugarcane, rum, for saxes and drums that limber you up
for the dance floor. For the joy of an ordinary walk
around old Havana.  Where "hey mango" means
you are very sexy. Wretched fighters invaded the shore,
poised to swarm plantations and cities,
bitter to get their island back.
But Fidel blew up supply ships,
captured them at hello.

Divers fly to Bahia de Cochinos from Europe
and South America to explore
a massive wall of coral
that you can paddle to, just offshore.
Here I embrace the clear, warm sea of my dreams.
I spread my arms,  slide without words
into the gorgeous water, fall back and float.
I dive for moon jellies and seafans
and a deep ridge of mountainous star,
stag horn, elk horn, and brain coral;
and sponges: tube, azure vase, elephant ear;
a million yellow fish.

Sharpshooters are still guarding the beaches
in case it happens again.

In my dream
the Red Chinese throw my mother into prison.
The food is okay, but
she hates it there.  “This is awful,” she says.
They e-mail a picture of Mom
looking up from a dungeon.
Their view is:  she has a bad attitude,
needs re-education.
I call everyone I know in Washington,
caution Congress that she is mayor pro-tem
of a small town on the coast.
Her numerous children, grandchildren,
cousins, in-laws are ordinary citizens;
my mother’s clan, not to mention neighbors, friends,
and countless shrimpers, could swing a medium-sized county
in a mid-term election.  Sure enough, there follow
fundraisers, rallies, call-ins. Shorefront hamlets
and port cities throughout America stir to action.
The president is sympathetic.  He reaches the People's Liberation Army
on a secure line and barks We want her back,
but the Supreme Commander is out practicing his backhand.
My brothers and I check her apartment,
figuring maybe there's been a huge mistake.
We listen but can't hear her voice.
We fear she’s in for miserable decline
and consider pounding the Forbidden City.
Saturday arrives, a rainy morning.
I wake up next to my husband.
He reminds me my mother has already died.
We’d all been so busy but now
we have no particular plans. Without her,
we can’t think what to do in the afternoon. 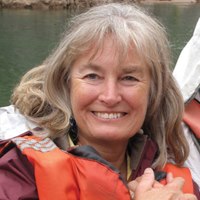 Karen Sagstetter has published poetry and fiction in numerous literary journals, two chapbooks of poetry, two nonfiction books, and The Thing with Willie, a collection of linked stories. Her family comes from Louisiana and from Texas, where she grew up. She studied in Japan as a Fulbright journalist and worked as senior editor for many years at the Smithsonian’s museum of Asian art, the Freer and Sackler Galleries, and at the National Gallery of Art.