"But How Can an Ocean Have No Water and How Can a Flood Be Dry?," "DTs," and "Reawakening Like Rust Vibrating on the Wing of a Fly"

But How Can an Ocean Have No Water and How Can a Flood Be Dry?

You can’t have me and I cannot have you because we are a flood and a flood cannot be had.
Really? Then

how to avoid drowning in our thinking more than we think?
You’re silly. I want

you to fill me because you might be there and I might be here but sea fences don’t exist. And you can film me and loop it but repetition does not make up for depth. But tripping

before it closed down Runyon Canyon with your pooch where you ran with makeup on, I’m over here where the ocean is deep. It wears no makeup but still it covers its depths. So which is it? Tell me, till me

like cash, like soil—until I understand the way you understand so we understand without the slick like oil.
Then I want you
to massage me with the bestestest geranium of Eden garden massage oil and would you get some of that new Grander Lavender for me so I can sleep later? I promise I won’t check my messages.
Even if they’re flooding in. You can believe in me so please just answer me.

How can an ocean have no water and how can a flood be dry? Take it up with you just gotta try like

how dead hair grows and so does the desert of Pinocchio’s nose made right before WWII where everything is at home without one.Without the amassing of missing missions always messing everything up like dead Disney homes

you’re missin’ me and I’m missin’ you because we no longer take cover under the kiss of
the windowsill - its chapped lips flaking paint in our bed where we still something one another.
Hovering in the bend of air on fire.

There’s no water in the desert but there is dried blood in the desert. Sometimes the dry blood is a plant
like a cactus that acts like a sharp sign for how to get lost
in serrated circles toward gates we can’t always go freely through to what awaits where
the heart pulls and Bill Gates says the future looks bright for a boy born with 4 legs and 2 penises.

We’re in a dark place, we say. Can we escape to Venus? Darkness is not always a bad thing, no one replies.

Agape, come let me come and come to me. Because what do you mean this is how it has to be?
A bunch of little white particles making more green stuff.
Fertilizer for aquariums.Why must it be this way? Can the question be enough?
Fertility in dead stuff. While we wait we don’t wait moving forward like hovering we’re in a shark place

but there are new nobility candles inside us tripping often tipping over to restart a process for growing green grapes.

A process of instants gapes for all across the divides of zones
to believe is to keep going on all these rides like thrones: the flood
none of us own.

DTs are some sort of confusion like delirium tremens that can really trumpet themselves through
dilemmas getting weird geared serious around seventy years of age but sometimes there is early onset.
Either way what happens is like right now how the world is in the aftershocking transition into a new
t.era

where a series of confused earthquakes makes for a new error of Holy Roman roadway. Or to
make a fairer era get off the road, hey, and let’s get some crab soup on this rainy day
stretching to halt these DTs like we gotta throttle the weather how we want it to be how

production on Sunny Isles Beach started and stopped around 2009.We’ll start it up again and
cameras will not be allowed at the pool but a lot of bottles and look at this image! When

gone the jack-hammer stopped started jackhammering. Humility got jackhammered.
In the humidity an old frog croaked in an older palm and oldish snowbirds yammered near a nude
beach a partially finished hotel lingered in its yo-yo humility an unsold sunburn shadow

scaffolding above the ocean of bigger waves than usual. That always moving thing inside us
got stuck up the tree with a pollywog. Penumbras. We both tried to pee in the surf a feeling of
what reassures but didn’t tell one another. Afterwards we walked the dog, never noticing
the mutating or tiny seizures

trying to tell us another tsunami was on its way. We didn’t tell one another, we saw one another as treasures.

We decided to stop using terror but somehow it came out anyway.

Reawakening Like Rust Vibrating on the Wing of a Fly

Is not a given

petting a lion named Gibbons large as our bed (I keep asking myself how I can be so certain of being already dead) without getting badly injured.

You instead misgiving, you heard with your eyes like two gifts (when what you really wanted is lift) what you saw is what you thought you wanted: gifts with ribbons of radioactive decay is true and so is this cradle in the rift diamond

who says I—who howls like roosters fighting. Pulling back the curtain—I

made a discovery before dressing re: the Mona Lisa. Here are pictures I took of lead-ill Emperor Augustus.
Look and ask yourself who led who and must us thus become dust?

My discovery is thus this: Leonardo da Vinci took a sip of endless water to see
repetition in this statue of Augustus and in his migrations modeled the Mona Lisa

after him as high priest. Leo was predicting at least the rise of women. He was a sort of
Renaissance feminist - try it on - I'm going to frame this as art and throw it in Lake Michigan or somewhere
where I am not going because (when is this going to end?) that’s the secret and you

can leak it wishing again even if especially if it’s a stretch makes of “bridge” a need to wed
if in dreams you can have it said that in reality you tried but paralyzed could not have fled. 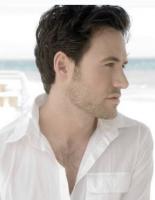 Thomas Osatchoff has resided in many places throughout the world where he has had the opportunity to develop his perspective. He has appeared in such places as The Cortland Review, Anti-Heroin Chic, and Dryland.