One day God will kill me is what I learned
at Sunday School today, it's His will that
I live and I'm alive and will be His
that I die someday, a day of His own
choosing and this is why I love Him or
am supposed to, after all, He loves me
even when I sin, Preacher says transgress
and trespass, those come from the Bible
probably, and if He sends me to Hell
for eternal punishment it's the right
thing to do, I deserve it, I knew what
the rules were, or are, or at least I'm told
that I did, or do, sometimes people know
more about me than I do myself, that
means that they're closer to God than I am
and they even tell me so and tell me
again, I'm ten years old, my memory's
not so good, maybe because I don't have
much of it, much to remember I mean,
so I'll go to Hell because I made bad

choices, it's not like God didn't warn me,
or that's what I'm told and I don't have much
power not to believe it but to tell
the truth I'm more afraid of folks than I am
of God Almighty, go figure, but in
Hell I'll have to compare the two and
I bet I'll decide that anything not
me, or is that not I, knows more about
what's what with Creation than I do, though
when it's Christmastime and I'm downtown and
see in the square across from the mayor's\
building the Nativity and baby
Jesus in the manger--is that what one
looks like, a manger I mean--frozen like a doll
because He is one, at least in the scene,
I feel sorry for gods and sons of gods
and virgins and mothers and fathers whose
wives get kissed and hugged by holy spirits
and donkeys and sheep standing around and
maybe wondering what the Hell God wrought
to disturb their space that way. I hear them.

I'm not dead yet but I'm supposed to get
ready they say at Sunday School because
at any time He can come for me, that's
Death or sometimes they say God, which tells me
they're the same, Death and God I mean, for that
matter Death and God and Preacher and my
Sunday School teacher and maybe even
my classmates so no wonder my folks stay
home and sleep in not just on Sundays but
Saturdays, too, I might do the dame when
I'm old like they are, in their late 30s
and not getting any younger, if I
live that long, I mean, I'd better pray for
forgiveness like I mean it, and fast, or
my soul will live eternally but in

the Bad Place though the plan is for it to
live forever in the good, that would be
Heaven and if I don't wind up there then
my ten years here on Earth so far don't mean
a pecking thing so I probably say
the Lord's Prayer a thousand times a day
and every other word that pops into
my mind is forgive so I like to think
I'm covered but then again that's being
too proud, pride could fetch me Hell as well,  I
don't know how to win and I confessed to
my Sunday School teacher but she told me
to fall to my knees and thank God that I
still live, in all my incompleteness and
filthiness, so it seems I can't even
be unclean the right way, which is also
the wrong. No wonder Jesus killed Himself.

Father's watching The Game of the Week, Curt
Gowdy and Tony Kubek announcing
the Yankees and the Red Sox. Tomorrow
morning I have to go to Sunday School.
Last week we learned something about dying.
Why do people die, I ask Father. He
takes a sip of his Schlitz and fishes in
his pocket for a matchbox so that he
can light his Lucky Strike. To make some room
for all the babies that are being born,
he says. Sometimes I get to strike his match
and hold it to his cigarette and blow
it out after we're both sure he's lit-up.
He inhales, then exhales though his nose.
His nostrils--I think that's a funny word.
Oh, I say. Well, where do the dead people
go? He takes another suck. I can keep
him going if I time my questions to
the speed of his smoking. I've got him there.
Go, he repeats. Where do they go? They die.
They don't go anywhere. He blows some rings.
They're as perfect as smoke signals can be.
I know, I say. We bury them. Some folks
even burn them and scatter the ashes.
He raises his left eyebrow. Well, that's true,
he says. Did you learn that in church? No, sir,
I say. I got that from TV. Of course,
he says. He smiles. He looks relieved. Tell me,
he says, where do you think people go when
they die if underground's not good enough
to suit? That's easy, I say. They go to
Heaven or to--the other place. I see,
jhe says. Well, okay. Their bodies remain
behind but their souls go to Heaven or
--that other place. So there's your answer. What's
the score, he asks. Dunno, I say. Do you
believe in God, I ask. Well, sure, why not,
he says. And Jesus, too, I ask. Well, yes,
he says. And Baptism by immersion,
I ask. Well, sprinkling was enough for me,
he says. But to each his own. His own what,
I ask. His own choice, he answers. Strike
three, Curt shouts, over my shoulder. Rico
Petrocelli whiffs. I don't want to die,
I announce. Well, that's your tough luck, he says.
Everyone has to, and each in his own turn.
I mean, he says, crushing his cigarette,
if you're a good man when you grow up
and don't do evil things then when you die
you'll go to Heaven, sooner or later,
either on Judgment Day or earlier,
I'm a little vague on all the fine points,
and get a new kind of body and meet
God and Jesus and Moses and Mary
and, uh, all the others, and never die
again. Your mother and I will be there,
too, to meet you. Well, at least your mother.
He coughs. But anyway you've got some time
yet to go. You ought to be having fun,
not worrying about dying. Let God
worry about that. Yes sir, I say. I
climb into his lap. He smells like smoke and
Schlitz and Aqua Velva and Brylcreem. He
holds me close. Let's enjoy the game, he yawns.
It looks like a good one. And then we sleep. 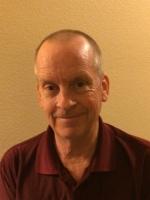 Gale Acuff has had poetry published in Ascent, Chiron Review, Pennsylvania Literary Journal, Poem, Adirondack Review, Maryland Poetry Review, Florida Review, Slant, Nebo, Arkansas Review, South Dakota Review, and many other journals. He has authored three books of poetry, all from BrickHouse Press: Buffalo Nickel, The Weight of the World, and The Story of My Lives.

He has taught university English courses in the US, China, and Palestine. Gale recommends the Hero Initiative.

Alas Poor Boomer by Dawn Corrigan
The REAL Ghosts of Seattle Past by David Fewster
Nine Visual Poems, January 2020 by Amanda J. Forrester
The Message and the Messenger by Andrew Paul Grell
"Kudzu" and "Retreat" by Marguerite Guzman Bouvard
"The Morning After" and "Postscript" by Gary Duehr
"Confusion" and "Alibi" by Ken W. Simpson
Party of One by Debra Leigh Scott
"Duck for Two" and "The Same Man" by John Grey
"were you a walking wall or wolf and were you springing into the sun," "the fletch of king bacon or the earth of nine worlds," and "forest sauce is the lucky moon of the dirt" by J. D. Nelson
"Tenant," "The Base from Which I Have Grown," and "A Moment Before the Second Big Bang" by P.H. Higgins
Identity by Robert A. Schaefer, Jr.
The Scab Beggar by Zoltán Komor
Just doing my job by Christine King
Seven by Michael Harold
"I met her a day after the car wreck" and "Memoirs" by Michael Harold
Yehy Vaya by Serge Bulat
Signs by Andrena Zawinski
"Bound," "Endings," and "Warmth" by Edward Lee
"becoming" and "Nazis en el Casa Blanca" by Mark A. Fisher
"Pink tax," "Turntable platform," and "Dodo kin" by Jeremy Nathan Marks
Another Equinox by Su Zi
So Real It Hurts by Su Zi
With a Human Face by Robert Leo Heilman
Willy Williams by Robert Leo Heilman
"'therefore get up with a determination to fight, O Arjuna,'" "east 51st," and "milkweed & sage" by Henry Brown
"Too Soon?" and "Birthday 2005" by Anthony Dirk Ray
"Talk," "Broken," and "At Night" by Holly Day
Buñuel and Emmanuelle by Casey Bush
geographies: "7th Arrondissement, Paris," "Tumbes, Peru" and "Penonome" by Mark Young
geographies by Mark Young
Losing Petals Quickly by KJ Hannah Greenberg
"Summer," "The Republic of Wood," and "Saying Goodbye to the World" by Robert Knox
The Last Piano by Gary Beck
"Relativity: Apraxis," "Holding the Line," and "The Hand That Feeds" by D.C. Wojciech
The story at Washington County outdoor School by Fin Sorrel
"Yugenics" and "Jabberwonky" by Bill Yarrow
"Reservations," "The Bombing of Interstate 64," and "Customs" by Ken Poyner
"Withdrawal" and "Multiple Little Voices" by Ann Neuser Lederer
"my father birthed his son," "My stepdad stopped hunting," and "'retrospective jealousy:' a retrospective" by RK Taylor