After so much walking, it was good to have Boy tracing my steps. And I say “Good” because I prefer simple terms, it’s one of the things that Boy taught me. Boy said that things are best when they are simple. When things are simple, they are good.

Most things are not good. We walked a lot, and even Boy got tired sometimes. I got tired all the time. But for the most part it is not the walking that is bad, though I think it is. Me and Boy have had lots of arguments about whether or not walking is good or bad. What is mostly bad is the air. I can’t breathe the air, not anymore. Thanks to Boy, I can breathe though. He made me a mask. The mask isn’t very comfortable, but it is definitely good.

Maybe I’m using that word too much. Me and Boy don’t usually change up the words since we can understand each other without them. The mask is useful. Because of it I can breathe the rotten air, but it is heavy. Most people don’t walk around with two heads, but I felt like I was doing that every day. The eyes on the mask were very dirty so it was not easy to see where I was going.

Every once and a while I pet Boy to remember he is there. Good Boy.

We sometimes came across people, but they were not usually alive. It’s best not to think about the dead people, Boy used to tell me that all the time. He was right, any number of things could’ve gotten to them. Boy used to say that we’ll have plenty of time to be dead after we die, we shouldn’t waste our time thinking about death prematurely. At least, that is what he used to say.

Boy gets to eat when we find corpses. I do not. When we find alive people we talk sometimes, Boy does not find living things so tasty. They are not very interested in what I have to say. That’s okay though, they don’t understand how good simple talking is.

Boy knew how to make air, which is why he didn’t wear a mask. It also meant that my mask never became useless. I’m not sure I understand, but that is what Boy told me, and I trust Boy.

Boy always found what we needed when we traveled. He would sometimes disappear for hours on end. The first time this happened I was lost. I couldn’t do anything without Boy, that is one of the first things he told me. I cried a lot for the few hours when I thought I was going to die, but he came back with water, and I was never worried after that.

I know that I would be dead if it weren’t for Boy, even without the mask and food. Normally, the birds would bother us, but Boy talked to them, so they never did. The bird’s also told Boy when the bombs would go off, they always seemed to have a sense for when it would happen. Sometimes the birds didn’t tell Boy, and he got sour.

One time we were watching a distant city across the tar sea during an orange sunset. I liked the colors, the black of the sea and the orange of the sunset overwhelmed the city in a dark, bloody lining. With my mask on, all I could really see was the colors. We watched for close to an hour, and as the sunset was about to give up against the night, the city exploded. I’d never seen such a huge explosion, Boy jumped on top of me to shield me from the shockwave that hit us a moment later. He said we were traveling through the night to get far away from the city. I asked him why the city exploded, but he would not answer me. That was okay. 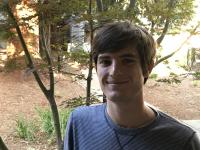 Cole Noone is a college senior currently studying creative writing at Western Washington University. He is a writer of poetry and fiction, and general lover of all things bizzare. Cole recommends the Monument Crisis Center in Concord, California.