The three boys walked up to the fence and stopped. They looked around a little as they made it there. Each of the boys had a flashlight, and they scanned the little field with them, passing over half a dozen goats. After a short pause, the tallest boy said, “That one. The brown one.”

The other two were silent for a moment. There were actually three brown goats, but they both knew which one the tallest boy meant. They stood quietly, waiting to see who would be the one to go after the animal. It seemed like a simple enough operation. It was just a matter of catching it.

“So,” the tall boy said, “I think you go behind it, grab it, and wrestle it to the ground.”

There was a little silence, and then one of the other boys said simply, “You”.

By this point, the flashlight beams were all focused on the brown goat. When it took a few steps, the beams shifted slightly, always with a moment of separation and refocusing as the boys made their separate guesses of where the goat was headed. “It can’t be more than fifty pounds,” the third boy said. The, there was more silence.

The goat raised its head, then it put its head down just a bit and took a few steps. “So,” the tall boy said, “we should get it.”

The other two knew what “we” meant. Still, they did not make a move. ““It looks healthy,” said one.

The tall boy said, “Let’s not forget why we’re here.”

“Hail Satan,” one of the others said.

“Responsibility for the responsible,” said the other.

The boys all watched the brown goat while it started to chew on some grass. The tall boy reached into his coat. He pulled out a small bottle. “There's no going back,” he said. He twisted the cap off, then he took a large drink. He handed it to one of the other boys, who drank and gave it to the third.

“Well,” the third said, wiping his chin, “no time like the present.” It was hard to remember a quote from the satanic bible that would be appropriate.

The movement was slow, with just little shifts as the boys leaned in different directions. Finally, one of the boys (not the tall one) took another drink from the bottle, handed it back to the second boy, and began to climb the fence. He got in and started walking towards the goat. The other two boys leaned over the fence. The boy near the goat looked back at the other two, then went towards the goat. It faced him, and the boy stopped. “Beast,” he said.

“Get him,” the tall boy said. The boy in the field held his hand out. The goat bleated and walked away. The boy looked back at the other two. They made no move to help him. He turned back to the goat. The goat’s ears perked up, but just for a second before they went back to their resting state.

“The darkness is not that from which we should run,” the shorter boy at the fence said. The boy in the field nodded, still looking at the goat. Two other goats, one black and one plain brown, approached now.

“They aren’t just going to hand themselves over,” said the tall boy. He drank again from the bottle.

The boy in the field approached the goat that he’d been told to take. He bent at the knees a bit, then he leaned forward. The goat trotted off. “Give me strength, give me power,” the boy said. The goat turned away from him and began to piss.

“Get him now,” the tall boy said, “while he’s distracted.”

The boy in the field hesitated, then started running towards the goat. The goat easily escaped. This continued for a bit. It continued until the boy slipped and fell in the mud. “Shit,” he said.

The boy in the field got up and looked at his knee. “Shit,” he said. “I'm bleeding.”

“Fuck you,” the boy in the field said.

The third boy said, “Get the goat. It's getting away.”

The boy in the field looked at the goat, then he turned back to the other two. “You get it,” he said.

They looked at each other. “You get it,” the tall boy said.

“Fuck you,” the other boy said.

The tall boy sighed and rolled his eyes. “You guys wouldn't do anything if it wasn't for me.” He put the bottle back in his jacket and then started to climb over the fence.

“Like you really do everything,” the other boy said.

The boy in the field started walking back to the fence, mumbling. The tall boy, halfway over the fence, said, “Where do you think you're going?”

The boy in the field kept walking. “At least give me a drink,” he said.

The tall boy finished going over the fence. He flapped his jacket a bit and then said, “You didn't earn it.”

The boy outside the fence laughed. The boy in the field walked up to the tall boy. He punched him in the arm. “Give me a drink,” he said.

The tall boy grabbed him by the hand. “You didn't earn it.”

The other boy tried to pull his hand back. “Like you did?”

They started to wrestle a bit. The tall boy started to get the upper hand, but then the other boy twisted a bit, and the tall boy fell. The other boy, the one outside the fence laughed and danced a bit. When he stopped, he pointed and said, “The goat.”

The two in the field turned around. The boy outside of the field was scanning around with his flashlight. The goat had wandered off. It was the only one they couldn’t find with their flashlights.

“The Dark Lord will be mad,” the tall boy said. He was still on the ground, and he started to sit up.

“He's crazy,” said the boy in the field. “He's not going to find it. Especially not without using his flashlight.”

The boy outside the fence handed the bottle back. “It's not a big deal,” he said. “I thought that goats were Satan's symbol anyway. We should've sacrificed a lamb.”

“There's no lambs around here.”

The boy outside the fence shrugged. “How long before he comes back, you think?”

“Until the earth opens up and the brimstone rains down from the sky.”

The other boy leaned back, stretching. “Don't tell him I said this, but 'Dark Lord' is too fucking Harry Potter. We should just say ‘Satan’.”

The boy inside the fence handed the other one the bottle. “My mom's going to be pissed that I ripped my pants.”

“Pussy,” the boy outside the fence said. He held the bottle up, trying to see how much was inside. The boys were quiet for a bit, until the tall boy became visible again. He was carrying something.

“Holy shit,” said the boy outside the fence. “Did he catch it?”

The other boy shook his head. “I'll be damned,” he said.

As the tall boy got closer, it was clear that what he was carrying wasn't moving. “Did he kill it already?” the boy inside the fence said.

There was a pause, then the other boy said, “Shit, that’s no goat.”

The two boys stood still as the tall boy made his way to the fence. When he was just a few feet away, he dropped what he was carrying. It was a large rock.

“We can’t kill that,” said the boy inside the fence.

“Don’t have to,” said the tall boy. “We’re going to use it for the next sacrifice. For the real sacrifice.”

The boy outside the fence took another sip from the bottle and put the cap on it. “You’re carrying it to the truck.”

The tall boy shrugged. “If that’s what’s needed. Better a heavy stone than a cross to bear.”

The other boy inside the fence started climbing over. The tall boy turned back towards the field. “The goat has gone into the darkness.”

“Where he belongs,” the boy outside of the fence said.

When the other boy made it over the fence, he told the tall boy, “Hand me the rock, but he’s right that you’re carrying it to the truck.”

The tall boy squatted down in front of the rock. “I said that’s fine. I’ll do it.”

The other boy, the one who’d been in the field, sighed. “Hand me the rock.”

The tall boy put his hands under the rock. “I know you both think this isn’t anything, but you’ll see.”

“Yeah,” said the boy reaching over the fence, waiting for the rock, “We’ll see.”

The tall boy started standing. He groaned, but when he made it all the way upright, he spoke again. “That’s right. It’s still coming. A blood sacrifice.” And then, he stepped toward the fence, toward the other two boys.

The other boy didn't answer, though the one who had been in the field did take the rock. He held it. The boys stopped talking, then. They were both quiet for a few seconds until the tall boy got close. 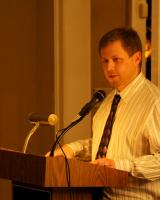 Zeke Jarvis is an Associate Professor at Eureka College. His works have appeared in Posit, Moon City Review, and Thrice Fiction, among other places. His books include So Anyway..., a book of introductions to poems that don't exist, and In A Family Way.