Indo-Greek weapons, coins, and pottery
of the second century BCE are excavated

pit Italian and Pakistani archaeologists
side-by-side, shielding one another from dust.

Evidence that borders cannot foresee
the future so blending, so bleeding.

Amjad Sabri sings Qawwali
for the final time during sehri,

when people are awake before sunrise
to begin their fast, to pray and cry.

He sings of loneliness and fear
in the dark grave, Ya Rasul-Allah,

please come to my aid, bless me
with luminance when I take my last breath,

owner of the green dome, my master,
grant me shelter under your cloak

for I have sinned, and my sins
are dust.

Hours later—Karachi, Pakistan:
Amjad Sabri is gunned down in his car

by two men on a motorcycle.
The Taliban claim responsibility,

say that blasphemy is rewarded
with so much blood, so much bleating.

I recall Hazrat Bilal, the prophet’s companion
whose voice brought him so close to heaven

that Allah did not permit the sun
to rise until Bilal sang.

Brown girl, brown girl
she is birthed to procreate with a brown boy brown boy

and if she sees her hummingbird reach
for potted petunias, almost touching

another image, which is in His likeness
which is a momentary Sistine encounter

where forever above One does not touch
the Other.

Brown girl, brown girl
she will never marry if she does not roll dough

because god forbid the white tearing
of the hymen before hard brown splits through it.

Brown girl, brown girl
not one person knows the paradox or the contradiction

to the bookstores and libraries
where authors sign their names on paper.

Brown girl, brown girl
her guilt is so deep and juicy in her thigh bone

that when her God consumes her, she is sure
He will suck the seasoned marrow

and she is left fucked on the littered path
to enlightenment.

Brown girl, brown girl
no matter how one part blue

is mixed with six parts white
no combination exists

to make or welcome brown.
She must wring with her hands. She must paint. 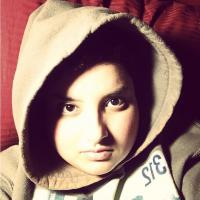 Alia Hussain Vancrown has published in journals and magazines in print and online. Her poetry has twice been nominated for the Pushcart Prize. She was selected to participate in Winter Tangerine's 2018 workshop, Singing Songs Crooning Comets, featuring seminars by Kaveh Akbar and Aricka Foreman. Alia works at the Library of Congress in the Law Division. She currently resides in Maryland. For more, please visit aliahussainvancrown.com and Instagram @aliagoestothelibrary. Alia recommends her late cousin's scholarship fund: The Daanish Khan Memorial Scholarship.