[these dragons are not the stars you wish on.
We are the ground you walk on.
Not the sparkling hope in the night sky
We dirt. Bless feet]

There is strength in the mild.
Message seeps through your hair
like sunshine to reach the ear’s tongue
swallowed like a gift
dropped in to the ear’s mouth
each syllable a tiny amethyst colored pearl
birthed from the chafing of bitch-dragon life

Don’t be mistaken
about the cradle-hell
and the stale shit of the garden,
the magenta bougainvilleas flower like fireworks
from winding wrought iron vines

soft songs float outside money like fog the color of ashes floats over a lake
and our fathers talk to us through paper in the waste can,
through the teeth of a picture smiling in the dark

Stored over domesticated generations
where is the poison’s destination?
The end is near and our talons have regrown.
Men huddle over small fires
of paper money                     raked together              like leaves           ready for transformation.
A healer leans over a sleeping dragon
lays on hands large and webbed as frog’s paws,
arms turn into oily black eels.
We are tired of buildings.
The black eels swim in the kitchen.

We are tired of our own minds sculpted by the stress of lynching from telephone poles and military plane murder.
The bridge lifts its brown rusted meat-head to the sky.
The cars wait.
The trees wait.
The boats roll underneath.
A pelican passes.
Flash of a silver plane’s wing catching the sun slices the blue afternoon sky— a knife blade of light miles long sears our windshields.
A song at four.
And a song at seven.
This is the way we listen.
And when we all die
and the trillion machines we’ve birthed finally rest
the world will be quiet                 soooooooooooooooooooo quiet

Hatching from eggs like a mouth of teeth cracking,

what happens, at the end, is that we turn into dragons,

Mother dragon lumbers around in a ditch

cursing the age of autonomy

the beads have turned black on their fences

At the end we all look like constipated trees,

belly full of a complaint swallowed

The horizon is crimson

and all the houses scream in their skins.

In the end, everyone in the world is a piece of shit

I look for the one I can half-stand

one who knows well the sound of crying in the night.

It is not frightening.

It is just hunger.

It is just life.

I don’t know its name.

There is a song at four a.m. and a song at seven.

The dragon’s scales wind dark and fine like wires of a circuit board.

dream twitch from standing on the earth too long

Are we done yet?

Oh lumbering dragons, when will we learn to dance as though we have no bones—hips circling

No men are to be trusted.

Well, neither are dragons with dishrag wings

Well I’ll tell you, after the revolution me and mine, we’re gonna be mermaids all the fucking time

This is how we need to listen,

a song at four and one at seven.

of all the stones

before we became dragons with arthritic claws

back when we had hands to hold

back before the world was gone

This year, the year of the dragon, is of burning.

Across the blue line in the sky metal heads dip and jive sucking juice from the earth, a poor pale beet.

When altercation smiles the city catches fire from behind,

ash snows on the soup

Jim tascio has not resigned.

And neither has jimmy ross, renegade baklavanarian, baking in every oven in the saint roch and bywater neighborhoods

This is a bulletin of the year of the dragon.

We manufacture fire from dumb ideas.

This is the bulletin of the year of It’s-Almost-Over-Isn’t-That-A-Relief.

It was getting so tiresome and cold living alone.

On the corner the gaunt man with a silver feather slings dope and swings a bullroarer, simulating thunder,

channeling the voice of god, saying, I THINK that i’m divinely OVER IT

HERE BEGINS THE OPEN SUBMISSION PERIOD FOR the REVISION of YOUR EXISTENCE. 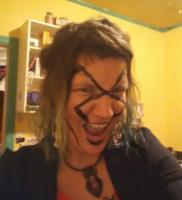 Laura Mattingly is a second generation Lithuanian American, and a third generation Irish American, who grew up eating burritos, listening to Mariachi music and Radiohead in southern CA, floated down the Missouri and Mississippi rivers to New Orleans on a homemade raft and now studies mental health counseling at Loyola University (because she's just crazy enough for the job). She studied writing at University of California, Santa Cruz, and University of New Orleans. She has poems in Big Bridge New Orleans, New Laurel Review, and Maple Leaf Rag. Her "Book of Incorporation" was published by Language Foundry in 2012.