It is not my skin color - ,
yellow brown, like the sand
daddy spread in the play box -
nor the home that raised me
in a neighborhood where
everyone, like us, had the
blood of Africa and lion hearts.

The lie my child-self hid
from Whiteness is the pretense
of equality. In blackness
I clung to God’s providence
while neighbor voices
whispered, you have love,
amid outsiders’ hateful taunts.

Why Do Black Men Have to Be So Angry?

Why do Black men have to be so angry?
A white man asked after my talk
about what Blacks wrote and when on
America’s dream sown like seeds to
root for some while theirs hit fallow ground.

His tone and eyes told me
His heart is too small to expel racism’s taint
And his will to weak to understand the weight
of an other’s pains and disadvantages without
thoughts about his burdens.

So the nine words hung in silence.
Discomfort slithered through the audience,
as listeners straightened and nervously waited,
in flustered silence as if Black anger’s roots
and the truth of slavery and segregation are unproved mysteries.

Why do Black men have to be so angry?
I wondered how to not tell them that grinnin’,
dancin’, singin’ and callin’ on Jesus only go so far.
A real Black man’s hurt where they cannot see,
or how he learns to cleverly hides his scars.

Why do Black men have to be so angry?
Because their faces get tired of grins.
They cannot tell you that Stepin Fethcit is dead,
or anyone Whiteness calls a good black,
is a Negro minstrel trying to hard sell an illusion.

Why do Black men have to be so angry?
The crowd eased forward as my mouth opened.
I said, ‘cause they crave dignity, justice and truth,
And see this world offers their color little of either.
They ache every day because they can say nothing. 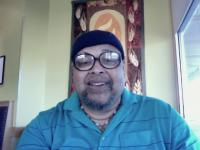 Vincent Golphin teaches and writes in Central Florida. He is widely published in magazines, journals and anthologies, most recently in the Poet Speaks series. His last solo collection, 10 Stories Down, reflected on several years in Beijing, China. Please donate to Fair Fight Action, Inc., which supports voting rights in Georgia and throughout the nation. Now more than ever the cause can use support.

Idolatry by Matt Schur
"If the Water Molecules Making Up X Change Moment-by-Moment, Then the Banks and Locale Surely Define a River, Right?" and "When Dad Asked Why I Don't Go to Church Anymore" by Bob King
"Oracle" and "When America's Schoolchildren Feared Khrushchev" by Jonathan Fletcher
Dr. Kipla Broek by Judy Dercksen
"Niobium," "Nickel," and "Neodymium" by Drew Pisarra
Bush rescue by Doug Jacquier
"I fought," "I save stories," and "The end of times" by Matthew Borczon
"Water Rises in Odd Ways and "Landlocked: Near the Four Corners" by Gina Ferrara
"I assure you this is no medicine," "I suppose another passenger," and "Without Seeing" by Nathan Anderson
"Affairs of State" and "Flint River" by Jeremy Nathan Marks
Will Be Boys by James Penha
The Whole Sea by Zoe Leonard
"Abigail Lee’s Sunglasses" and "Startle and Flinch" by Darryl / Dadou / Baron Wawa
"Antifa's Ghosts," "The Lie," and "Why Do Black Men Have to Be So Angry" by Vincent Golphin
United Nations finds pedestrian driver switch = peace by Robert Fleming
The Hundred Thousand Things by Carol Willis
The Shape of Light by Daniel Cyran
The Book that Sells Itself by Erik Bosse
Expiration Dates by Richard Downing
"stagNation," "as felt as heard," and "un nu mb" by Shine Ballard
Sabas by Margaret Cantú-Sánchez
"Gloria la chola," "Por eso estamos donde estamos," and "Survival is learned" by Facundo Rompehuevos
Pinches Bananas by Facundo Rompehuevos
Ice Cream Truck by Karol Nielsen
An Artist Applies by Chris Klassen
Nine Images, July 2022 by Heather Weathers
for Jacqui Disler by Su Zi
Unfamiliar Ground by Peter Cherches
Why Lundquist Stabbed Me by Michael Somes
i’ze gots the post-bastille part-um blooze, 2019 by R.V. Branham
"cooking off the fat," "going," and "forms that perforate routine" by Livio Farallo
"Orlando" and "The Wreck" by Ori Strider
The Promotion by Jon Fain
The Agenda by M. F. McAuliffe
"Sergeant Daria Filipieva," "'Some Casualties,'" and "Voices" by Marguerite Guzman Bouvard
"Horror Stories Have No Subtitles" and "Orgasms" by Kushal Poddar
Daily Manifestation Journal by Pascale Potvin
Towards Silence by Alan Fyfe
"Justice," "Matter," and "History" by C. Derick Varn
"As for the Worm," "Crows, Wolves, Foxes," and "Warning" by Tobey Hiller