Aliyyah and her friends had been rehearsing a play at my girlfriend’s house for a few weeks.  We hid at the back of the house reading and pretending not to listen to the drama being formed.  There’s something intrinsically interesting about that part, though.  It’s the gathering threads of something that will present itself as an immersive scene – like a Sherlock Holmes story in reverse, where the first thing you know about what you see is how it was formed.

Meanwhile, in Aliyyah’s life, another drama was building.  She was down at the Matagarup Nyungar refugee camp, an urban settlement that redefined the notion of refugees.  A group of Nyungar, the first nation of West Australia’s south-west, had welcomed the urban homeless onto their traditional lands.  Aliyyah was there, blogging her experience on social media, when the Perth Police and Rangers descended on the camp, taking most of the campers possessions.  They took all the tents.  They took bedding, clothes, even children’s toys.

Hard by the Perth Central Business District, under a traffic bridge, there is an island in the Swan River.  The Nyungar know the area as Matagarup.  Before white settlement dispossessed the Nyungar from what is now the West Australian capital, Matagarup served as a first point of passage across the wide river.  Here, the Nyungar have traditionally welcomed travellers, and used the island as a sacred birthing place.  The river and its tributaries are central to Nyungar religion – it is the path of the creator, the rainbow hued snake.  Where the central civic common, King’s Park, is now, the men hunted kangaroo.  Where the Perth Train Station stands, women picked Zamia Fruit.

But the European name for the place, Heirisson Island, is better known locally.  It has been the a site of aboriginal protest for some time.  Claimed under the native title act, Matagarup has the listed uses of “hunting, fishing, camping, and ceremonial” permitted under Australian law for its traditional owners.  In 2012, to celebrate the fortieth anniversary of an Aboriginal tent embassy set up outside Parliament in the Nation’s capital, Canberra, the Nyungar Tent Embassy was established on Matagarup Island.  The purpose of these embassies is varied, but the issue of Aboriginal sovereignty in their own lands is always central.  Taking the native title act at its literal word, the embassy was a legal use of the island.

The clearance of the island, as witnessed by Aliyyah in April this year, was not the first. Bella Bropha, a Nyungar activist and one of the leaders of the embassy, observed in an interview in 2015 that it was, by then, “about the fifth” time police had taken all the tents from the camp.  The police cited City of Perth by-laws as justification each time.  More revealingly, just before the first police action on Matagarup in 2012, Premier Colin Barnett, expressed in a media statement that to leave the embassy in place would make the government look “impotent”.

By 2015, the brief of the embassy had expanded a little.  The focus was now on homelessness, and the camp at Matagarup was an urban refugee camp, for people displaced within Western Australia.  As such, they welcomed many homeless of non-Aboriginal descent.  A large part of the issue, though, was closures of Aboriginal communities in the north of the state.  The Barnett government had turned off power and water supplies to these communities, deeming that they were non-viable and to dwell on traditional lands was a “lifestyle choice”.  The custodians of Matagarup wanted to provide a safe camping spot for members of those communities made homeless and forced south, towards the urban centre.  The police and rangers came in Autumn and took all shelter and bedding, all over again, just as grey clouds started to roll in off the Indian Ocean.

Aliyyah asked for resources and I didn’t much like the idea of people sleeping unsheltered in the first rains.  I went on a mad tent hustle through my home town and up the Swan Coastal plain, to city.  I stopped for the last tent in Victoria Park, a leafy old worker’s village a few suburbs back from the Swan River.  My son, Yitzhak had come with me, good humoured and excited about the tent hustle.  We picked up Aliyyah from one of those apartment blocks the shape of chest-freezers and waited a few moments while she finished her evening prayer.  We were loaded up, now, with tents, blankets, and a critical mass of teddy-bears some old women at the Mayday thrift shop had loaded onto Yitzhak when we told them the story.  No one could understand why the City of Perth had acted this way.  Everyone I visited shook their heads, asked for a recap of events, then ran the thing through a personal philosophy before deciding it was incomprehensible – a severe and malicious act against the helpless who were only taking up a little space in an obscure urban bush reserve.

We caught the last bit of light, driving the back way into Matagarup, off the Causeway Bridge and parked by a kayak hire shed.  We talked about theology until Aliyyah’s contact appeared, cutting across the parkland.  There were ten homeless left, sheltered under the bridge pylon on a neat grid of blankets and not much else.  This was the remains of the tent embassy’s vision.  We had exactly ten tents.  The people under the bridge shook Yitzhak’s hand and called him a good little fella.  At eleven, it was his first act of civil disobedience.  I stayed at my girlfriend’s house in the city.  I smoked a cigarette outside as the downpour rolled in that night, breaking the long heat, and it felt ok to enjoy the rain.

In the sun of the next morning, though, a disquiet remained.  There had been as many as one hundred and fifty people on Matagarup before the last clearance, and we had seen ten.  The homeless gathered there had been mostly dispersed.  Only a week later, move on notices were issued to the remaining homeless and the resources we had gathered were taken again.  The future of the Matagarup tent embassy remains in doubt.  In a grand ironic gesture, the resulting protest at Parliament House saw Nyungar representatives offering the city a gift of a shopping trolley full of tents, blankets, and food, suggesting that the city authorities were clearly in deep need of these supplies to have stolen them from the homeless.  The gift was refused.

The problem is, the actions of the West Australian Government and City of Perth are not so incomprehensible. To look at the situation as the threads of its drama gathered, is to understand the structure behind the scene in front of us. A click away from the news, the City of Perth website reveal the Heirisson / Matagarup Island master-plans.  A genteel sculpture park is planned with the development of the island.  In broader terms, the state government’s recent attempt to downgrade native title laws, and legislative clamp down on protest in natural heritage areas, serves one interest alone – mining.  The government rides on mining, and Western Australia worships mining.  The downgrade of Aboriginal First-Nation claim to any area, and the prevention of protest, only ease the conditions for exploration and exploitation of land by the mining companies.  Perth is envisioned as a bourgeois arts capital, where the mining money will be spent, cleaned of those whom trickle-down economics failed to trickle down to.  The last clearances at Matagarup were carried out on the eve of Perth hosting an international Liquid Natural Gas conference.

Of course, that’s only my comprehension.  The government never really expressed that these acts of legislation were in the service of mining, their arguments were otherwise – so many arguments, to track them would keep you awake for months.  The City of Perth never expressed that police actions on Matagarup were about development, they cited by-laws about camping.  Today, a decision was made in the high court of Papua New Guinea, declaring the offshore detention camp on Manus Island, where Australia keeps its refugee boat arrivals imprisoned, to be illegal.  Reports of sexual abuse and violence against refugees come regularly from Manus, so it’s hardly surprising another country wants to wash its hands of our torture outsourcing facility.  Perhaps the Tent Embassy picked the wrong words at the wrong time.  If we start to think of our homeless as refugees, who knows what will happen to them?

At the moment, I’m in my fracture walled shack at Yunderup – a little way from the river bend where the rainbow hued snake sleeps.  There’s two towels on the floor for the two roof leaks that show when the rain shakes the tin roof, the way it is now.  More rain, and all opinions forgotten – I am grateful for that roof. 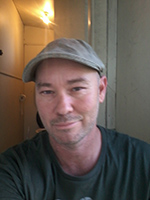 Alan Fyfe is a writer of poetry, prose fiction, essay, and journalism from Western Australia.  He was poetry editor on the University of Western Australia creative writing journal, Trove, and a winner of the Karl Popper Philosophy Award.  He lives by a river, with his son, very far from you.

A Parable by Robert Knox
Now, Hours Later by Christopher Shipman
Question by Marguerite Guzman Bouvard
Eight Paintings, July 2020 by Moira Crone
"The Deepest Part of Dark" Virtual Book Release Party with Anne Elezabeth Pluto, Tara Campbell, and Kayla Rodney
"The always-never-whatever poem," "My brother's name bears the Grudge," and "Venus Erogenous" by Darryl / Dadou / Baron Wawa
"Génocidaire," "He's NOT my President," and "Desiring my boyfriend's body" by Sergio Ortiz
The Eyes of the Inmate by Foster Trecost
"Microbes" and "Surrealist Convergence" by Cindy Hochman
Uncle Drew's Lysergic Backbrain Apocalypse (Slight Return) by C.F. Roberts
"Black-out," "Random Phrases," and "The Jungle" by Bernd Sauermann
"Outskirts" and "Maybe Only Trees" by Tobey Hiller
"The Wrong Mice" and "Nether" by Tobey Hiller
The Door to Dawn by R. Grayson Wills
"Juliet" and "Greenheys Road" by Jeffrey Side
Sleeping in the Lot by Rodger Kamenetz
Diadem Toxique by Alan Sondheim and Maria Damon
Huggin #3, #4, and #6 by C. Derick Varn
A Metaphysical Cookbook by Marc Vincenz
The Girl Who Knew Too Much by Suzanne Nielsen
"distance intimacing," "Corona Theory Litany," and "to escape eternity for a spell" by Vincent A. Cellucci
Dessert by Randy Stark
The Apparatus of the State by Kim Coleman and Leona Strassberg Steiner
"Heads or Tails," "The Scam of Love," and "I Don't Think So" by Jay Passer
"Prayer" and "Literary Matters" by Jeff Weddle
A Friendly Reminder by Michael Howard
"Stones Doomed to Bloom," "The World Is a Sandwich," and "Joy" by Ivan Peledov
Six Paintings, May 2020 by E.E. King
"Reality: Apraxis," "Telling Time" and "Perpetuite / Self-Portrait" by D.C. Wojciech
"History Gets Tired Too" and "Outer Space" by Tim Suermondt
"The Poem I Didn't" and "Zen, Hunger" by Pui Ying Wong
It Was Summertime by Anthony C. Murphy
Ode to Brittany Howard by Alex Z. Salinas
"Too Long in Bed," "As Always," and "Connecting" by Martina Reisz Newberry
Unlocking Purple by James Penha
"The Toast," "Animal Farm," and "Grids / lock" by Mark Young
"Pandemic" and "Gunmetal Sky" by Howie Good
"Yehuda Amichai/Emily Brontë" and "Barely" by Gloria Mindock
Thinking of Ice Cream by HW fitzroy
"Dairy Aisle Mortality" and "The Leader of His People" by John Grey