A Postcard from Where I Live Now

There's a barn here where all the words live, and we make stories of them for people.

"Mister," the letter said to me, "my husband's always loved words. Age is taking him, and he can't tell the stories that he hears inside. Is there a tale I can give to thank him for all the places his words have taken me?"

I sat on the floor of the barn. Instead of calling the words, I read them the letter. They heard me out, and I listened to them rustle-shuffle as they will when they see the path. When all was quiet again, I took the ones who'd volunteered and put them in a box, last at the bottom and first at the top, to be unfolded as a gift to a man loved by a woman.

A Description of the End of Days

Fitzgerald's life and mind are in a post-apocalyptic shambles. The germ-weapon surprise we call the Crazies has killed most of his kin at unexpected moments, his friends and many of his smithy's customers with equal randomness, and continues going about its work ten years after setting out. Being spared so far by the Crazies, and therefore being sane by comparison to people who died violently insane, Fitzgerald does his best to cope, to have a reasonable routine and a rational reason to go on living.

Each morning, he dresses the way a cowboy would dress if he were a peer of Roy Rogers or Gene Autrey in the Saturday Westerns of his childhood. He wears newish-looking cowboy boots, of course, and spurs that never fail to jingle, jangle, and jingle once more. His jeans are neither baggy nor tight, so the women of his younger days could admire him and still decide without undue pressure if they lust after him as well, were they still alive. The checked shirt is long-sleeved, and is buttoned all the way to the neck and at the cuffs; the heroes of childhood would never be seen with their cuffs rolled up. A neatly folded bandana is wrapped around his neck, and a light-colored cowboy hat is tipped slightly forward to keep the sun out of his eyes. These are clean clothes, and would be even if he had just traded blows mano a mano with Black Bart on a dusty trail.

Some days, he'll walk the road down out of the hills to the ramshackle community that once was an old suburb and someday might become a village again. He barters for what he needs, using the coin of work done or to come at his forge and stable for things he can use, spends some time in talk with Mr. Halston and the other survivors. Other days, he and the dogs hunt for fresh game. The dogs seem to like him well enough after all these years, and always listen closely when he talks to them around the cabin. Still other days, like today, he leans back in a chair, props his feet up on the porch rail, and contemplates the lack of peace that created the quiet around him.

Evenings after dinner are unvarying, except for once a few years back when he took sick with a fever that kept him in bed for nearly a week of fervent hoping to die. With the dishes done, the dogs fed and the cats sent mousing, Fitzgerald sips some whiskey watered with tears. For him, the world didn't end until his wife of over fifty years died. He doesn't know for sure she's dead, but its been seven years since she didn't come home from hunting for berries. Nobody's found her, but they haven't seen her, either, so it's almost fact the Crazies got her in the deep woods and she crawled off to die. He has a drink because he remembers her. He cries because he has only memories.

Whiskey and tears finished, he yields for a while to the shambles. Taking his wife's soul in his arms, he dances a simple two-step around the living room. No great singer, he sings nonetheless: first Johnny Mercer's "I Remember You," then Skeeter Davis' "The End of the World."

. . . and it ends with an old cowboy falling asleep, catlike, in the afternoon sun.

He dreams about a yellow Caddy ragtop with high tailfins, roaring as it once did along the pre-apocalypse surface of the weed-taken county two-lane in front of his porch. He dreams about leaping on its almost-infinitely long hood like a cowboy of his childhood would ride a just-caught mustang, and of bright red liquid flowers suddenly spreading across its hood and up the towering slope of its windshield. 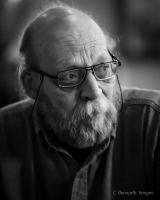