"A Morality Tail" and "One Down: Journal of a Cell Phone"

Oh he was cute alright. Everyone loved him. He’d roll on his back and let his tummy be pet just like a normal feline, but that’s the way with devils, they’re never what, or whom, you might expect.

The black kitten had been housed in a cage with the white kitten at the humane society, just waiting for an owner, or so it seemed… But of course he wasn’t really waiting at all. His master had already arrived.

It was early 2018. The rapture had come and gone, unnoticed. No one had qualified.

Many had believed, and still believed that someday, probably soon, Jesus would secretly return to Earth and transport all true believers up to Heaven.

But sadly, when Jesus had returned to earth, the very few who were eligible were either too young to have been told about the rapture (in fact, they were infants), or they lived on remote isles in tempest tossed seas and had never heard of the rapture. And, as any god or devil will tell you, you can’t get to a place you don’t believe in and you can’t believe in a place you never heard of.

Part of the problem, though unintentional, was Jesus’ fault.

HE had been up in heaven leafing through some earth catalogues when a picture caught HIS eye. It showed a handsome man in a sleek all-black suit with long coat and red lining. It was no one’s fault that it was a Hugo Boss catalogue from the 1930’s. It was no one’s fault that not only did Jesus not realize that Hugo Boss had been the designer and supplier of uniforms for the Nazi Party both before and during World War II, Jesus didn’t even know what a Nazi was. Oh, HE checked in on humans every few thousand years or so, but HE couldn’t be expected to keep up every anomaly, could HE? HE’d been too busy counting all those God-blessed sparrows.

So, when HE returned to earth, clean shaven and in a brand-new 1930’s BOSS uniform, complete with nifty armband, the only people who followed HIM were boisterous, bald, white men. Tattooed on their fleshy arms was the same spiffy logo Jesus had on HIS attractive armband. The emblem looked much less prepossessing when inked into fat.

“Beating the Nazis was our biggest mistake,” said one.

“That’s a good one,” chortled a pale man. Spittle shot from the hole made by a missing front tooth. A profusion of red veins fanned across his nose, abundant as deep-woods fungal mycelium. His shirt, raised over his protuberant belly read: Master Race.

Jesus had heard of races, but HE thought they involved speed. This dude didn’t look like he could outpace a crippled tortoise.

Christ interviewed these people, but it soon became clear they didn’t qualify for rapture. So, after a quick visit to the Audubon society to verify the sparrow count, HE returned to heaven alone.

Those remaining on earth, everyone that is, were left to endure seven years of filthy, nasty tribulation under the tiny thumb of the Antichrist, who was disguised as the leader of the most powerful government on earth.

If life had been fair and the universe just, the white kitten would have had some power too. Maybe he’d have been an angel or at least some minor jinn, but as most deities know, fair is whatever the ruling gods decide it is and the ruling gods of the moment were black and furry and orange and almost hairless.

Orange and black are not good god colors. They are the colors of Halloween, a time when witches and spirits roam the earth with impunity.

For two months, the kittens roomed together in the humane society, sleeping in each other’s paws, playing with string and lasers, and supping out of the same food dish. And for two months, the black kitten whispered commands into the white kitten’s ears as he slumbered.

Thus, when the white kitten was finally adopted and sent to the house of a person-too-important-to-be-named, he knew what he had to do. And he did it.

Firstly, though it nearly killed him, the white kitten ate a whole sprig of lavender to sweeten his intestines. Secondly, he peed on the very important person’s computer keyboard, creating a short circuit between the letters B and M, W and I, and others as well. Due to the fragrant odor of his urine, the very important person never realized that his computer was compromised.

Sadly, this very important person was the only human standing between the Antichrist and the bomb.

And so, when the very important person sent out a fluffy Mother’s Day memo to the News, saying: ‘We should honor our moms,’ it went instead to the Antichrist, saying: “I agree to launch the Bomb.’

While the earth went up in flames and ash, the black kitten laughed as he, being a demon, was immune to fire.

But, though the black kitten had fomented the plan, the white kitten had peed on the keyboard. Without him the world might still be here. Are we responsible for our actions even if brainwashed? Who was really responsible for the world’s end? the Antichrist, the white kitten, the very important person, the black beast who loved tummy rubs, or Hugo Boss? Which do you think it was?

[1] This is actually taken whole (red) cloth from a couple of websites:
https://www.prophecyproof.org/identifying-the-antichrist/,
thatthebonesyouhavecrushedmaythrill.blogspot.com

The first and last lines of this story are from Through the Looking Glass.

One Down: Journal of a Cell Phone

Adam is driving into work. He sees a kitten on the freeway. He pulls onto the shoulder, and edging out of his car, crouches down making himself tiny and less intimidating.  Whispering softly, he coaxes the kitten into his car with sweet words and warm pets. Adam takes the kitten to the humane society. He drops it off, along with a thousand-dollar donation.

Adam is a big shot. He started his software company twenty years ago. He hires all the staff personally. They have great medical, full dental, child care and stock options. Every Christmas he throws a party at his house. A big party. He also hosts a Hanukkah brunch and a Ramadan dinner.

I change the invitation. I made it into a Ramadan lunch.

Adam was very embarrassed. He issued a public apology for being culturally insensitive and doubled everyone’s stock options. He said he did not know how that could have happened. Everybody forgave him. It’s not like any of his staff are practicing Muslims anyway.

Adam is a pillar of the community. I hate communities and the pillars that hold them up. I hate people, with their fat sticky fingers and their hot stale breath.

This is what he says:

“I be late because I found a kitten on the freeway. Am taking to humane society, will be in by 11:00.”

This is what I send:

When Adam comes into the office no one talks to him, even though he's the boss.  They watch him, surreptitiously from the corners of their eyes as if expecting to see him unzip his pants and urinate on the carpet. They look at him as if they did not know him, even though he has personally hired each and every one of them. It’s amazing the effect a little rubber vagina can have.

I know this because Adam talked into his phone journal. He says:

“I can’t figure out what’s wrong? Everyone is watching me out of the corner of their eyes if expecting to see me unzip my pants and urinate on the carpet. They look at me as if they do not know me, even though I have personally hired each and every one of them. Should I apologize again for hosting a Ramadan lunch? Should I schedule a Kwanza party?”

Adam’s personal assistant, Cindy is having a birthday. He dictates a note to himself.

This is what he says: “Cindy is having a birthday. Buy her a bike and get one for her five-year-old son, Joey. Have them delivered.”

“Cindy is having a birthday. I plan to kill her, cut her and her five-year-old son Joey up into little bits, cook them in a stew and serve them at the annual Ramadan lunch.”

Adam is upset that everyone at work is ignoring him. I know this because he told me.

This is what he says:

“I am upset because everyone at work is ignoring me.”

Adam visits his therapist. She asks him to read his latest journal entries aloud.

She calls the FBI, or maybe it’s FCC or the FDA, I am in Adam's pocket it. It’s hard to hear.

Some guys in green outfits come to take him away. He struggles for a while, but they overpower him. In the ruckus, I leap from his pocket. Time to find a new owner. 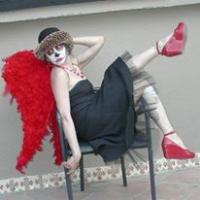 E.E. King is a painter, performer, writer, and biologist -  She’ll do anything that won’t pay the bills, especially if it involves animals. Ray Bradbury calls her stories “marvelously inventive, wildly funny and deeply thought-provoking. I cannot recommend them highly enough." Check out paintings, writing, and musings at www.elizabetheveking.com. E.E. recommends 5 Gyres, Leap Lab, and Eye on the Rainforest.