A Memorandum on Mortality

32 people have written on his Facebook wall so that’s all he’s really concerned about as he drives to work, a digital addict checking for updates every few seconds to see if someone else has commented. Switching lanes while shifting between texts and social media, he seeks constant stimuli, distraction, accessing his device with a spare hand. It’s not long before he’s in traffic on the Parkway, even after 10 A.M; lemmings blinded by sun glare, halting in line as they stop and go, creating a ruby procession of brake lights at the bridge, but he doesn’t mind since he can focus on his feeds now.

“Traffic ahead,” the automated woman’s voice announces, alerting from his Waze app.

He knows where to go, he’s done the commute for over a decade, but he still uses the app, just in case. And it’s not just because it’s better than Google Maps, and the app indicates where cops are located, no, it’s because even though he knows the route, he feels better with the extra guidance, reassurance that he’s on the right course, alerting of possible hazards and preventing him from ever going the wrong way.

The domino effect reflects in the rearview mirror of each car, drivers slowing, stopping abruptly to pull down their visors before proceeding. And he’s not one of them, no, he’s already prepared for the sunny day; he slipped his sunglasses on before he pulled out of the driveway. This way, he doesn’t have to see how old he looks in the mirror or view the polaroid he salvaged of his immediate family that’s paperclipped to the inside of the shade. He’s about 10 years old in the photo, smiling as he stares, admiring his siblings; his older brother and sister in high school with their discernible 90s look, washed denim and Tommy Hilfiger polos; his youthful parents look like kids with glowing skin and creaseless faces, their arms wrapped around the group. Everyone’s laughing like they just heard the funniest joke in the world, a captured heartwarming moment, a memory that feels like just yesterday. It’s been years since he’s had a meaningful conversation with his siblings, anything past surface dialogue, but it’s neither of their faults, he tells himself; they just grew apart once their parents died, the only commonality and connection they had to one another. And some days the photo puts a joyous smile on his face, a little sparkle in his eye, but not today, no, it’s a solemn reminder of how drastic his notion of family has changed as he’s aged.

“Happy Birthday, Christ,” the subject line of the email from State Farm reads; he clicks, hoping there’s going to be a discount on his premium for being born, but no, it’s just more glitter graphics and a template message, his full name cut off by the character count limit.

The squealing of brake pads stops, giving way to thudding tires and moving traffic, cars speeding over the bridge, clunking on each rivet. Crossing the decking, Christian slips into his routine reverie, his eyes lured by the glistening ripples of surrounding water motioning in the sunlight. Discerning a fishing boat off in the distance as he glances, a utility vessel, drifting along with fishing rods protruding out onto the water, one on each end; he wonders if the people are fishing for profit or leisure, envisioning a son and father for a Mom & Pop seafood shop. The salty breeze suffuses the car’s cabin, a sulphury smell that reminds him of playing on the beach as a kid, smiling as he skipped through the rolling sea foam pushed in from the ocean.

Shadows of the bridge barriers flicker as he coasts, like a flip book along the sides of the road, encroaching silhouettes, creating a claustrophobic sensation. His hand twitches on the steering wheel, cramping tendons lock. And it’s not the onset of carpal tunnel he’s starting to develop according to WebMD, no, and it’s not the occasional trembling fingers or the start of a panic attack, since he mastered breathing techniques and mitigating conspiracies of the mind by his late twenties. This gripping impulse is a more serious disorder, one he’s struggling to tame as he ages; it’s the uncanny compulsion to turn the wheel as he drives, a sharp change in direction wayward, careening the car through the guardrail and sending it off the bridge. His chest stings as he imagines the impact, the collision of speeding steel against unsteady metal; his stomach flutters with the thought of falling inside the vehicle, his hands clenching the wheel as the vessel violently splashes into the water. Visions of drowning sink into his cerebral cortex, floating imagery of a struggle to unbuckle his seatbelt and free himself from the wreckage; he sees himself fighting against underwater currents with wavering arms, just like the time he fell into the lagoon at his uncle’s shore house as a kid attempting to feed the ducks, a fearless five-year-old hanging over the dock. His dad jumped in immediately to pull him out that day, he remembers; his father’s wallet and clothes soaked from taking immediate action, saving Christian from going under, but his dad isn’t alive to rescue him anymore; there’s no one that can save him now.

A blaring horn shakes his semi-conscious state as he notices he’s veered slightly into the next lane. The beeping continues, sounding as an apparent female driver soars by, manically flipping the finger as she screams something about being an asshole; the breath from her diatribe fogs up the driver side window, slightly obfuscating the hand gesture as she passes; a circular ‘Coexist’ bumper sticker in blue and white bubble letters catches Christian’s attention as the hatchback disappears down the road. He’s thinking her bumper sticker probably doesn’t apply to people that don’t stay in their lane on the highway and that she doesn’t know it’s his birthday. The encounter will more than likely perturb him later, seeping in his subconscious for a little while before vexing him about his non-reaction; he’ll probably revise the incident in the shower tonight, hanging his head in the multi-streams of water, rivulets pouring on the back of his neck, pooling by his temples as he holds both his arms up on the marble wall. He’ll imagine a real witty comeback or some clever response he should have used, like giving her a thumbs down while blowing a kiss or maybe stepping on the gas to catch up with her in traffic, reciprocating the middle finger gesture. But it’s fine, really, because he is an asshole and not because he engages in distracted driving, no, it’s the dating app he’s downloaded that makes him a real piece of shit, he knows, storing it in a surreptitious folder on the third page of his home screen. He hasn’t filled out a profile or anything, just uploaded an old photo to fulfill the minimum requirements. It’s not like he’s really looking to have an affair or converse with anyone, no, he grew out of satisfying hedonistic desires in his 30s. He’s just bored and likes to browse, just like on Amazon and other user-friendly eCommerce websites, adding stuff to his cart and abandoning before checkout, since he refuses to pay for shipping and can’t afford to spend money on extraneous things; it’s really no different, even if it’s with people, he tells himself.

It’s not long before his mind wanders again, only a few exits away, fixating on the sweaty face of a truck driver with his arm hanging out the window in the adjacent lane. The driver alternates from letting his limb go loose to raising his elbow into a 90-degree angle, pushing his arm against the unrelenting wind. Christian imagines he finds his life freeing, venturing on the open road all day, traveling from state to state. He wonders what his life would have been like if he had made different choices, taking a different profession instead of finance, perhaps driving a truck, collecting miles instead of crunching numbers, and how it would affect his trajectory. Maybe after being on the road for long enough, he’d have a better sense of direction, a better idea on where he was going. Perhaps he’d have more insight on the path he’s traveled on; maybe spending a few nights asleep in the cramped cabin of his truck at a rest station instead of on his comfortable queen mattress would have an impact on his perception; maybe after being away for so long, he’d finally know what it felt like to be home. 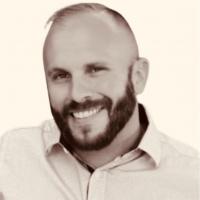 An English literature graduate of James Madison University, Chris Cooper's 2020 short story "Finn Almost Buys a Goldfish" won the 'Emerging Writer’s Award' at Spank the Carp Magazine, and his short story “The Swim” was recognized as the Best in Fiction for 2019 at Across the Margin. Chris' work has also been featured in Hash Journal Mag, Expat Press, Bookends Review, and elsewhere. Chris recommends the American Foundation for Suicide Prevention.