"You comin out with us Saturday?" That was Mark, spearhead of the ruling clique: starting quarterback, starting shortstop, first-line center (hockey), class monarch. He drove a Jaguar. He chewed tobacco in class.

"Yeah," Steven smiled deferentially, "for sure. What's going on?"

"Brian's parents'll be outta town," Mark said, chewing gum with his front teeth, "so he's havin people over. We might go out first and get drinks. Find girls to invite." He stopped talking, looked at his phone. "You gotta get a fake ID, bro."

"I know." Steven unsmiled. "I gotta get on that. You got yours in Canada, right?"

Mark said nothing as he responded to a text. Steven pretended not to notice. He watched as Dean, his old friend from juniorhigh, wandered into the room and quietly sat down. Steven hadn’t talked to Dean in two years. Funny how it works.

"What?" Mark was back. "Oh, yeah, dude, our guy in Toronto will hook you up. Hundred bucks."

Things were finally, following years of excruciating anonymity, looking up for Steven, though he didn’t necessarily understand why. He'd spent his first two years of high school privately despising Mark and his gang of social superiors, with their J.Crew and their high fades and their girlfriends, with their seeming enjoyment of life. They appeared to have fun, and that was unforgiveable as far as Steven had been concerned.

But now, owing to a most improbable revelation, it was so much different. Now Steven saw that they were just people—just people who wanted to get what they could from life—just people who happened to be, through no fault of their own, popular. By acknowledging with kindness Steven's existence this year, Mark had humanized himself, and if Mark was human so were the rest of them. Even Brian.

"When's the next time you guys are goin up there?" Stupid question, Steven thought. Too eager.

Mark shook his head and snapped his gum. "Don't know."

Their teacher strode through the door, motorcycle helmet beneath his arm, and apologized for being late, though the bell wouldn't ring for another two minutes. The low din of preclass discussion kept on. Steven took out his completed homework and put it on his desk, carefully reviewing his answers. 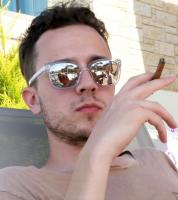