"ISO angel wood," "pitch me an alternate ending," and "par for the quarter"

restless receptacle of the devil seeks sterilized caregiver to contaminate into coma. i’d put an ad in the newspaper but you don’t believe in obsolete media. then again, you probably wouldn’t answer. too coy to lunge toward the obvious suicide of my spinal column, you’d prefer to loiter about the perimeter, picking up patina-coated pennies in fickle fingers and skipping them across the curdled surface of my kingdom. what shoo-flies your wingspan away from my steady sentry of antibodies? i warned you i am a cosmonaut of inoculations and if you can’t handle it, well then. i will begin to catalogue all that is left to neglect. but something tells me there’s more to the archives of covenant than that. hellbent on short-circuiting the assembly line of western medicine, you unplug all the wires from my bloodstream and take a bow, dancing in chlorinated ashes like i’m the one weighing gravity down

pitch me an alternate ending

after the armistice, our cost of living got curb-stomped. penny for your burgeoning madness, deifying junkiedom. the sewers are a-hum with hitmen, but don’t take my word for it—just listen. we agreed to reunite in limbo but this is somewhere different. the word hell only reifies my previous indoctrination. same old passe state of the union between bethlehem and its unclaimed tumors. settling into long distance is like practicing loudly pronouncing a word wrong—this isn’t the silhouette song, so why sing it? i’m pissing on my shoes in a cobblestone alley because it’s carnival season and that’s how we do. you could fumigate my entire nervous system and i’d still be infested with clueless affection for the brutal way you are a needle and i a spoon. curl your fingers around my innermost tubes and whisper to my beaucoup bruises that this is the director’s cut forever, set on loop

par for the quarter

the cost of concentrating real hard on being unconscious: my blank-eyed shake in the morning does not mean i’m nervous. it’s ok to be on the fence about death; one day the pickets will shrink so thin there will be no balance left. we will stitch all the red flags into a quilt to illustrate to the children of the apocalypse some faces stay blurred even while standing still. i’m mayfly-fluttering clipped wings at you along decatur—parachute feelers too fragile to cast a shadow—when you whisper, there is no methadone for this. and i’m like, no shit. i’m going to write a porno script about weaning off of you fist first. if my life is a dumpster fire, at least people in need can warm their hands on it, right? there’s a science to self-extinguishing at just the right witching hour, but we agree the sunrise comedown might be even better, when there’s a civil war era open hospital bay with just enough untethered tables to make our reciprocal surgery too public to stomach 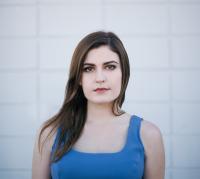 Dylan Krieger is writing the apocalypse in real time in south Louisiana. She earned her BA in English and philosophy from the University of Notre Dame and her MFA in creative writing from Louisiana State University. Her first book, Giving Godhead (Delete, 2017), was dubbed "the best collection of poetry to appear in English in 2017" by the New York Times Book Review. She is also the author of Dreamland Trash (Saint Julian, 2018), No Ledge Left to Love (Ping Pong, 2018), The Mother Wart (Vegetarian Alcoholic, 2019), Metamortuary (Nine Mile, 2020), and Soft-Focus Slaughterhouse (11:11, 2021). Find her at www.dylankrieger.com. Dylan recommends donating to the National Abortion Federation to preserve bodily autonomy and access to medical care for all human beings.