What would humans have to do to really live sustainability with the world's ecosystems?

I got a shock when I read about the pattern of species extinctions which is taking place that form a part of what is called the "Sixth Mass Extinction." It turns out that man's adverse influence on ecosystems didn't start a few hundred years ago, when we started using fossil fuels. Instead it started way back, when man was still a hunter-gatherer, and there were fewer than 100,000 people on earth.

According to Niles Eldridge, in describing the Sixth Extinction:

In this post, I'll explain a little more about the Sixth Mass Extinction, and how fossil fuel use has contributed to it in recent years.

I'll also talk about a new bottleneck that humans seem to be reaching related to oil limits and financial crises that grow out of these oil limits, with the current example being the European Debt Crisis. Depending how this and other debt crises work out, it seems possible that human population will decline. If this should happen, it could lead to a reduced problem with species extinction.

In the last 500 million years, there have been five mass extinctions, removing varying percentages of animal species. The last happened 65 million years ago, when dinosaurs became extinct. Biologists (including Michael Soulè and E. O. Wilson) have calculated that the current rate of extinctions is 100 to 10,000 times the background rate.

Everywhere, shortly after modern humans arrived, many (especially, though by no means exclusively, the larger) native species typically became extinct. Humans were like bulls in a China shop:

Agriculture represents the single most profound ecological change in the entire 3.5 billion-year history of life. With its invention:

Homo sapiens became the first species to stop living inside local ecosystems. All other species, including our ancestral hominid ancestors, all pre-agricultural humans, and remnant hunter-gatherer societies still extant exist as semi-isolated populations playing specific roles (i.e., have "niches") in local ecosystems. This is not so with post-agricultural revolution humans, who in effect have stepped outside local ecosystems. Indeed, to develop agriculture is essentially to declare war on ecosystems—converting land to produce one or two food crops, with all other native plant species all now classified as unwanted "weeds"—and all but a few domesticated species of animals now considered as pests.

Now, with the advent of fossil fuels, we have been able to take our attack on ecosystems to a new higher level. I have previously shown how population greatly expanded, as the use of fossil fuels expanded in the last 200 years. 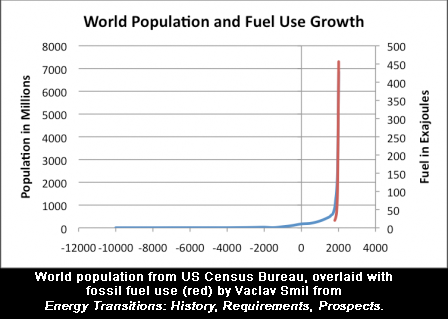 It is difficult to even show population growth and fuel use on the same graph. They exploded at the same time, so the amounts overlay each other.

Recently, however, we have started experiencing a change. World oil production has not grown nearly as quickly as demand since 2005, leading to high oil prices. These high oil prices (and the high food prices that go with them) lead to recessions, and layoffs, especially in oil-importing nations. Governments try to fix these problems, by bailing out banks that have failed and by stimulating the economy, but find themselves in increasingly unacceptable debt positions. I have described these issues in previous posts.

The current situation is brittle. If there are severe financial dislocations, they could feed back and disrupt other systems, such as international trade and industrial agriculture. We could see political upheavals and reduced oil production, and because of all of these issues, reduced human food supply. The changes that may happen could be quite sudden, much faster than one might expect, if the Hubbert Curve were the only factor influencing the amount of oil available to society.

The European Debt Situation and Beyond

Clearly Greece has severe financial problems, and is near default, but European financial problems extend beyond Greece. Banks in other countries hold Greek debt. If Greece should default, banks outside Greece that hold Greek debt would stand to lose money, and would likely need to be bailed out. Otherwise, the many individuals with deposits in the banks would find themselves without the funds they had deposited. Businesses might not be able to pay their employees, if their funds are in a "bad bank".

If there is a default, countries vary in their ability to deal with it. If a country is outside the Euro, such as the UK or Switzerland, it can "print" more money, and can use these additional funds to recapitalize the banks in financial difficulty with freshly issued money. Thus they have a way around the problem, although it may result in some inflation.

Countries that are part of the Euro have a bigger problem because they are more like an individual state of the United States. They use a common currency, so cannot themselves issue more currency. Unless they have a lot of funds available from other sources, it is difficult for them to recapitalize banks when there are defaults.

EU countries have been arguing for months about how to solve the problem, but there is no easy solution, in part because the problem easily spreads from country to country, so it is a much larger problem than simply paying for defaults on Greek debt. It is likely that there would be defaults related to the debt of other PIIGS (Portugal, Ireland, Italy, Greece, Spain) countries as well. Some banks in France would also need recapitalization, because of loans they made. The EU itself is limited in the amount it has available to bail out countries with problems, and individual members object to spending huge amounts to bail out governments that are likely not to be able to pay back the debt.

The European situation may eventually bring about the end of the Euro. If this should happen, we don't know what the indirect impacts of this would be. A recent UBS publication talks this issue and mentions the possibility of civil disorder, saying:

Past instances of monetary union break-ups have tended to produce one of two results. Either there was a more authoritarian government response to contain or repress the social disorder (a scenario that tended to require a change from democratic to authoritarian or military government), or alternatively, the social disorder worked with existing fault lines in society to divide the country, spilling over into civil war. These are not inevitable conclusions, but indicate that monetary union break-up is not something that can be treated as a casual issue of exchange rate policy.

Whether or not the Euro situation leads to disorder, there are innumerable other debt problems around the world that are likely to get worse, as world oil supply gets tighter. Countries are likely to go back into recession, or see anemic job growth, and their governments will try to fix the situation. Eventually, the "borrow your way to prosperity" approach will have to end, either though debt defaults or through unwillingness of investors to purchase more debt.

Over time, the debt "unwind" I have talked about since early 2008 is likely to grow and gather steam. As more states, cities, businesses, and individuals default on their debt, recession is likely to worsen.

One of the questions in all of this is whether the international financial system withstand all of this disruption. If Greece defaults, and then pulls several larger European countries with it, how will this affect international trade? Even if this hurdle is passed, can debtors such as the United States and the United Kingdom continue with their high level of imports, if their financial condition continues to deteriorate? Perhaps the value of all of the OECD currencies will drop greatly, relative to non-OECD currencies, or countries will choose to trade only with trusted partners.

If any of these things happen, trying to maintain the world's current level of oil production and food production will become more and more of a challenge. Countries with debt problems are likely to find themselves unable to afford their prior level of oil imports, or will find trading partners unwilling to trade with them.

What Happens when the Current System Stops Working?

In a "normal" ecological situation, humans would have co-evolved with the plants and animals around them, so that stopping parts of the fossil fuel system would be no problem. Our current situation isn't normal, though. We have found any number of ways to make our current way of life dependent on fossil fuels. At the same time, our way of life does not fit with our local ecosystems:

Thus, if something like the financial crises that we are now seeing causes any of our major systems to fail, we are in danger of finding ourselves poorly adapted to the world around us, because we depend on fossil fuels in so many ways, and because we have spent so many years not evolving with the ecosystems around us.

Exactly how things will work out is unclear, but there seems to be a possibility of a substantial reduction in human population. This change seems possible, because we are so poorly adapted to living in the areas around ourselves, if we lose any of our major systems, such as industrial agriculture. The fact that other systems (ocean acidification, climate change, water tables) are currently undergoing adverse change makes the situation worse.

The timing is not clear. Theoretically, a decline in human population could come as soon as an indirect result of the European Debt Crisis. But governments may be able to find ways around this crisis, and the next several that follow. And financial crises don't necessarily translate to food crises, but they may.

If there is a reduction in human numbers, it may actually help other species survive, and make the sixth mass extinction "less bad" in terms of the percentage of species lost. The world is resilient, and will eventually recover.

It seems to me that, in spite of our current predicament, we need to go on with our lives, and appreciate what we have now. Some of us may be able come up with partial mitigations, such as finding ways to better live within our local ecosystems.

Any change will take some time. Perhaps we will have several years, before major changes take place. We need to take each day as it comes.

This article is licensed under a Creative Commons Attribution-ShareAlike 3.0 Unported License. Based on a work at OurFiniteWorld.com.

Gail Tverberg has an M. S. from the University of Illinois, Chicago in Mathematics, and is a Fellow of the Casualty Actuarial Society and a Member of the American Academy of Actuaries. In early 2007, Gail decided to devote full-time to issues related to oil shortages, and other shortages, and their impact on the economy. Her works are often printed at TheOilDrum.com, FinancialSense.com, OilPrice.com, and EnergyBulletin.net, and esepcially on her own blog, OurFiniteWorld.com. She has been an invited speaker to many groups, including the Seventh Biennial International Workshop in Energy Studies and the 2nd International Biophyisical Economics Conference. She has also been interviewed on the Canadian television station BNN.