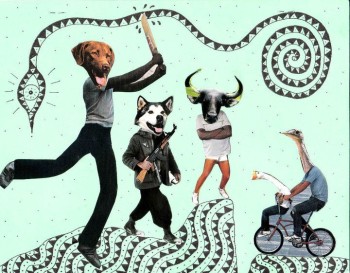 Many artists enjoy the title 'artist' a bit too much. I first noticed them in the early 90's when coffee shops caffeinated the nation and Cobain gear insisted public sulking was enough to consider yourself an artist. I'm sure they existed prior to my experience and I know they exist now. These people make me very uncomfortable. August Traeger is an artist that does not fall into this category. August is a creator. If you or I never heard any of his audio releases nor seen his graphic designs it would simply be because he chose not to make public what he does out of necessity and love. An artist creates and August Traeger is an artist. I have seen him perform many times and this guy gets lost in the performance. He transcends moment and intertwines with time. This being said, he'd tell you he'd rather stay in his apartment and create without ever having to perform. Not only does he create and perform, he also attends. He's a regular at performances where nobody else is. He's encouraging of all artistic expression and nary a once have I seen him be an asshole. Not even I, in all my magnificence, can say I've never been an asshole. His drawings are otherworldly yet transfix the viewer somewhere between contemplation of ancient history and philosophical meltdown. He's dedicated to a long term side project of exquisite corpse drawings which can be seen at 1000ExquisiteCorpses.blogspot.com. 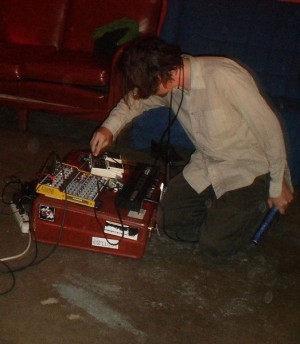 August generally performs under the name Somnaphon. This is a music project where he uses chained effects pedals, cymbals, rain sticks, excited puppies, found sounds, guitar, video, or other to create ongoing ambiance whether that be harsh noise or pollinating daisies. "A more accurate description is that I manipulate hardware and/or software to achieve the sounds. A final composition may be the result of creating several songs which are then completely destroyed and re-interpreted many times over, eventually being boiled down into a single piece of music. Or they could just as easily be simply an edited live recording. It's all fair game." Somnaphon can be viewed on youtube where you will find a wide range of live recordings as well as a smattering of Butthole Surfers reconstructions. The record label, Bicephalic Records, aims to produce artists who explore "electro-acoustic, electronic, glitch, noise, and the like." These are released on cassette or 3" discs. The sound quality is precise.

The tracks below are my interview with August in four parts. We both set up mics and pedals. August recorded open air on his device. I supplied the beer and the sweet wine and the shots of rum. August took the information home and created a concise audio- portrait of the four hour event. In conclusion I'd like to conclude. —ES

Give a listen to the four-part interview Eric Smiarowski conducted with August Traeger:


And then enjoy three tracks by August Traeger as Somnaphon: