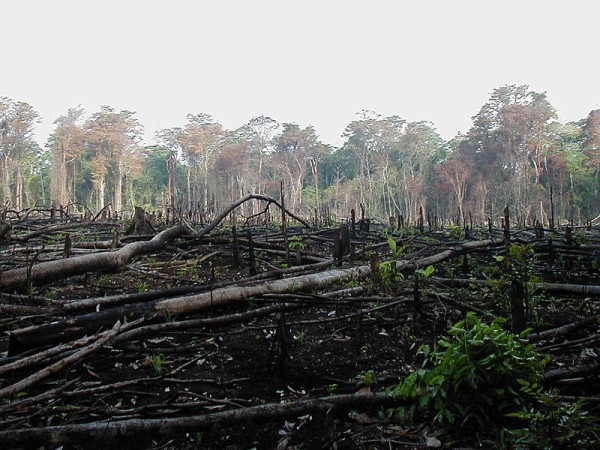 At present, numerous environmental researchers are warning of future resource shortages. The list of them is large and includes water, oil, a variety of minerals and metals, as well as other materials.

Yet, most people carry on as if they do not hear the message at all. They refuse to cut back in their dreams of continuing economic growth.

In relation, part of the problem with them is perhaps an inability to make connections. For the most part, they seem to have little or no idea about the collective consequences of their individual behaviors.

For example, they can't walk into a super-sized Wal-Mart or a mall and see the environmental destruction and energy use behind each type of product on the shelves, nor that the whole gargantuan conglomeration of products could cause a problem. They can't look at cotton goods or food and imagine the huge oceanic dead zones and the annihilation of many diverse organisms caused by farm runoff. They can't go to the paper isle and picture that, aside from all of the multitudes of items derived from timber, U.S. toilet paper use alone destroys thirteen million acres of forests per year, along with all life dependent on those forests.

Particularly the loggers, the paper mill operators, the truckers hauling raw materials and final products, and the store clerks don't want to visualize such images. They don't want to see their own roles in the process any more than do the people who, while complaining about the impacts of overpopulation on crowded highways, chose to have many children, which, of course, will lead to many more toilet paper purchases in times to come. In fact, they, like the individuals who wring their hands over mountaintop blowups for coal and the slaughter of indigenous forest dwellers by oil company hired thugs, don't want to be told of cut-backs of any types at all, let alone just bathroom paper.

Especially if they are fond of vacation travel or have seen their home energy use spike due to lots of appliances running at once, they don't want to picture that they possibly could be implicated in anything having to do with the downside of their lifestyles. They don't want to link their habits to the fact that over seventy percent of electricity in the U.S. comes from fossil fuels. They don't want to think that maybe their rising demand for oil at the pump or penchant for air travel is somehow indirectly related to the types of damage seen in the Amazon forests, the Appalachians, the Niger Delta or the Gulf of Mexico.

Above all, they do not want to be told that the economic growth is not coming back. They don't want to picture that life will dramatically change as the oil runs out while the price for it and everything dependent on it will continuously rise. They don't want to question about whether the capitalist system of economics will cause further ecological ruin and social inequality as it plays itself out.

Further, they don't want to consider that maybe they will be forced to change some of their life's major goals and the ways that they live in times to come due to a combination of factors, such as the coming energy power-down, climate change variables, diminishing resource bases and overpopulation. No, they, instead, want to rise up the socio-economic chain so as to be able to consume even more goods and, if they're particularly adept at obtaining riches, maybe even be able to purchase a vacation home, a yacht, an RV or some other coveted treasure.

Moreover, they don't want to imagine that maybe two groups will make out okay in times ahead and one of them probably won't be the (ever shrinking) middle class. They don't want to note that the successful ones just could be the very wealthy people, who can afford to buy anything regardless of its costliness and scarcity, and the people at the other end of the spectrum, who have simply walked away from the status quo to form self-sufficient farming communities, transition towns and egalitarian co-ops able to provide for the majority of their members' needs.

Instead, they simply want to envision that everything will get better overall in life after a spell. Yet, here we are all together stuck in a situation in which there exist seven billion humans all needing food, water, shelter and other things while increasing in number at a rate unprecedented in human history. All together, we're digging up and plowing every parcel of land on which we can manage to lay our hands. We're trawling and dredging every ocean and sea onto which we can stake our claims. We're damming every waterway that can be controlled. We're pumping and polluting the world's fresh water supply faster than it can be replenished, using up other resources in entirety, turning the Earth's oceans into acid, fouling the atmosphere, scarring the land with deep mining holes, blowing up mountains to extract their coal and, in exchange, creating mountains of trash.

Simultaneously, we're methodically ripping apart the planet's forests at the rate of about one acre per second, destroying multitudinous species one after another, creating climate change on a scale that staggers the imagination, and generating explosions of radiation to blow into every outdoors nook and cranny in existence. (Recent news headlines include Radiation Readings in Fukushima Reactor Rise to Highest Since Crisis Began. Imagine the hubris of a species that refuses to learn from Hiroshima, Nagasaki, Three Mile Island and Chernobyl, such that even now the desire exists to build even more nuclear plants and A-bombs!)

At the same time, we're warring with each other over resources between and within nations, and always, always... insisting upon more things to own. In relation, the proliferation of wants and needs is limitless.

So, we're demanding more food, more water, more construction for our ever burgeoning masses, more jobs and, especially, more spaces into which to fan out as we add 219,000 more humans every single day (eighty million people each year) while simultaneously displacing other types of life whose environments we take over in the process. Meanwhile, billions are sunk in poverty largely due to having already exceeded their regions' carrying capacity and, as they did so, they often took the last trees with them, just as had happened on Easter Island.

At some point, something has to give. The pattern, the rapacious ravage, cannot persist indefinitely. Indeed, it won't do so because the resource base, itself, is largely disappearing across the globe. The ocean fisheries are depleting and expected to run out by mid-century. Climate change has brought pine and spruce beetles in such high numbers that they are eating millions upon millions of acres of trees and spreading out everywhere that they can, much like their human counterparts.

Concurrently, methane is releasing from underwater beds and permafrost to join the carbon releases from humanity's use of fossil fuel from rich underground deposits that took millions of years to form, and that will be gone in the blink of a century's time. In relation, the looming climate change effects will be horrendous and will curtail many areas of human activities.

Yet, the main reason that the whole mess will be curbed is a simple one: Infinite growth, whether economic growth or population growth, cannot continue indefinitely. As the economist Kenneth Ewart Boulding reputedly said, "Anyone who believes exponential growth can go on forever in a finite world is either a madman or an economist."

Accordingly, one can envision that a crash is coming—one far worse than the current recession. In large measure, it's because environmental tipping points are on the way and, for those people in the worst locations for the collapse—the desperation, conflicts and chaos will likely be horrific in scale and ferocity.

How could they not be when our governments and the status quo do not encourage our transitioning to a steady state economy, business based on regionalized commerce and a cooperative inclusive economic arrangement rather than out of control global competition? How can further troubles not come into being when a vicious globalized capitalist system is in existence for which maximal profits, not people and their needs, is always the overriding goal? Despite its desirably from many standpoints, how can an alternative scheme be put in place when it bumps up against the prevailing paradigm and the corporatists—the powerful über-elites that control the gargantuan transnational companies and our fawning government toadies?

All considered, the best course of action, unless one is incredibly affluent, is to run for the hills—almost quite literally so. Under the circumstance, it could be sensible to find a quiet niche somewhere in which there's already a community in place whose members have the appropriate skills sets, constructive understandings and a supportive intact surrounding environment so as to be able to create a largely self-reliant way of life. Even though such a change could be hard, the option of doing nothing different could become increasingly problematic in light of the further social and ecological breakdown that's assuredly on the way.

Emily Spence is an author living in Massachusetts. She has spent many years involved in human rights, environmental and social services efforts.