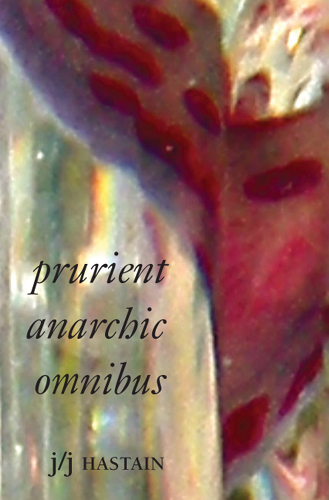 "Autobiographical" is one way to get a handle on the surreal, overwhelming journey that encompasses j/j hastain's prurient anarchic omnibus. There a number of words running through the mind when you finish reading the book. Perhaps it's easiest to describe it as a surreal, abstract memoir mixed with observation and cultural commentary. Autobiography and memoir spring to mind, because it's clear that hastain's imprint is on every single page of prose and photography. You can't write lines like those found in the book's wonderful preface without some deeply personal history behind every single word. It's impossible to embrace without connecting to complex ideas about sexuality, biology, personal evolution and what that does to the immediate world around us.

Then there's the style of the prose itself. No one would work at constructing such a subversively elaborate approach to the framing of the language without absolute conviction. Not necessarily complicated, it contains a very potent personality with intricacies that are entirely separate from the words themselves. It almost feels at times like the style of the book is a separate entity from the words. The two entities come together, and the result is something that pushes your perception of things like gender and sexuality and brings you well away from what you think to know. That's a lot to ask, but hastain seems confident that you'll hang in there for anything thrown at you, or any of your views that are challenged. Being challenged like that can be wonderful for a reader. You don't have to necessarily like the imagery, views and poetic method of hastain to get something from this book. Chances are you will enjoy the layered visuals and unwavering honesty of prurient anarchic omnibus, but it won't be a complete loss if you don't.

It's almost as important in a work like this to keep in mind its ambition and the sincerity of that ambition. hastain believes with complete, concrete conviction in the ride we are taken on. To date hastain has worked extensively as a teacher, performer, musician and writer. This is not their first book, but it's impossible to shake the sense that here more is being put up for grabs than in anything hastain has written so far. The idea of going for broke is never implicitly stated, and it doesn't need to be. Love, death, rebirth take physical form and stand as the speakers of this long prose piece, broken only when the phrase, "dear weaver of disparates," appears on a single page.

The density of prurient anarchic omnibus doesn't end there. More creativity and potential for that creativity to express itself exists between the spaces of love, death, rebirth and everything else hastain weaves in a hundred-and-twenty-eight pages of startling, bizarre photography and words that construct a decidedly unique lyrical narrative. It doesn't appear to be lyrical at times. There is nonetheless a very distinct rhythm and tone that stay a consistent course. "Dear weaver of disparates," almost feels like a chorus.

You can look at it that way. If not, you can simply take prurient anarchic omnibus as a weird, beautiful ride into parts of the world that we may not be familiar with. hastain, on the other hand, appears to be complete control of those places as our raconteur and master of surrealist ceremonies. That isn't the same as being at ease. hastain may know where we're going, but that doesn't mean they knows what's going to happen as the last words of the book trail off into darkness. This is a flight that begins and ends on the page but doesn't necessarily end in spirit. hastain is aware of this. The thought is expressed numerous times throughout. Because although everything might be on the line here, that doesn't mean the ride begins on page one and ends at one-twenty-eight. This is where evolution and biology come into play. Things change. Organization falls apart and gives way to new organization, and then that falls apart to make way for the next thing. Or perhaps the next thing borrows from something in the distant past to create a time and place within ourselves that is then expressed in the times and places around us. This is something hastain writes about extensively here. The world in five, ten or twenty years is dreamed of here. prurient anarchic omnibus wonders where hastain will be in that time and what kind of person might come of the experiences that occur. A lot of those experiences are relayed in this book along with a host of thoughts, hopes and beliefs. This brings us right back to the idea of this being a memoir.

Only it's not a memoir as we tend to know the concept. If you have to look at it in traditional means (although hastain doesn't seem to be all that concerned with traditional means—indeed they seems committed to breaking down as many conventional brick walls as possible), then consider prurient anarchic omnibus as part one of an ongoing life story. Part two will be whatever hastain comes up with next. It might be in the form of more photography. It could be another book of long verse. On the other hand it could be like this book and seek to utilize both. It's possible hastain knows no better than we do what part two might be. The next chapter might be something completely different from what we've been shown thus far. hastain is committed above all else to taking the past and present to create as many different avenues for the future as possible. Along the way those venues, whether they deal in love, sex, death, change, growth, consequence, travel or anything else will be expressed in works like this one. prurient anarchic omnibus is not the easiest realization of that kind of ambition, but it's one of the most compelling. You have to admire that if nothing else. Start at that admiration if at all possible. It could be the way you begin to appreciate the book's creative merits. Those can be pretty impressive, too.