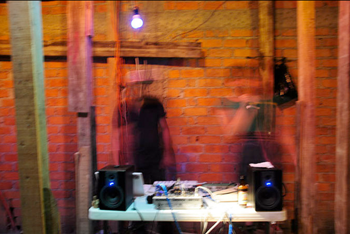 Pygmy Jerboa, a collaboration between Bulgarian musician Maria Stankova and Mexican musician Iván Naranjo, is unclassifiable, and that's part of what is so exciting about listening to their newest release Top Secret Jazz. You're never quite sure what you're hearing. Often there is some mixture of electronic jabs mixed with disconfigured found sounds, foregoing traditional notions of melody and rhythm. They instead utilize mood and the fundamentals of sound—almost at a primitive level—as a method of deconstructing form and expectations.

Unlike a lot of composer/performer/musicians that I might compare them to, they seem to be uninterested in ambiance. Where some might lay down a foundation of electronic thrum to root the compositions with an ethereal focus and mood, they create the compositions on an ever-changing aural landscape. The sounds are surprising, jarring, unsettling. They often forgo rhythm entirely as a conceit by which songs are created. (At a minimum there is no time signature to grab onto for the untrained ear.) There are pulses, jabs, and screams coming from whatever noise makers they are using at any given moment, giving each composition a sense of fear for the listener. And not just because there is something haunting about the compositions, but because the listener exists in a purgatorial soundscape, forever unsure of what is taking place, unsure of the logic behind the journey they are on. But there is most certainly a logic at work here. Everything fits together perfectly. While chaotic, it never fully devolves into chaos. There is always the sense that there is a complex structure, something logical, a mathematical code that could be deconstructed, a reason for the madness. 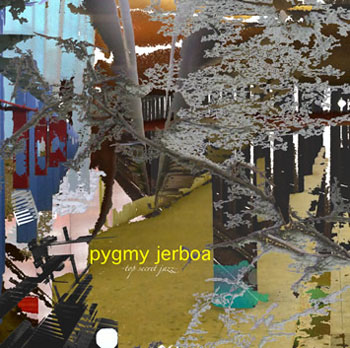 The minimalist compositions on Top Secret Jazz are beautiful, but at the same time almost a form of aural violence. They attack, recede, and belittle the listener, in the best sense possible. To listen to Top Secret Jazz is to give yourself over to the unknown. It's the reason that music like this, ultimately, can never be popular. There is risk involved in giving yourself over to these compositions. To begin the descent into their world the listener must give in, in some regards, to the most primitive whims of the act of listening. It's an aural trust fall. And it's worth trying. —DLN

Pygmy Jerboa (b. 2009, USA) is maria stankova (b. 1984, Bulgaria) and iván naranjo (b. 1977, Mexico). They perform "with live electronics the voice gone inhuman homemade/junk instruments surfaces and supercollider our music often transverses composition and improvisation rules and anarchy." You can download the entirety of their new album, Top Secret Jazz, for free at Abolipop.

We are excited to present two tracks by Pygmy Jerboa: